“The Ottoman Lieutenant,” the first Hollywood production to reflect Turkey’s perspective on the Armenian genocide, has been criticized both for its outlook and its artistic merit. 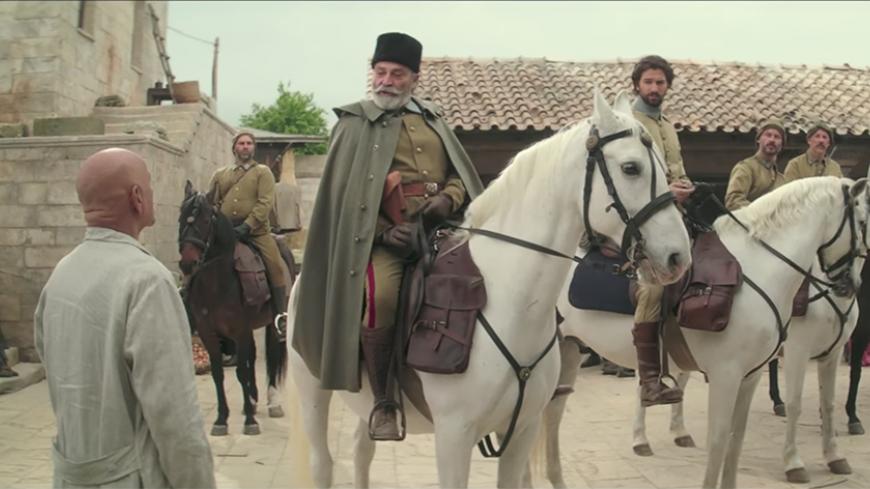 A still from “The Ottoman Lieutenant,” starring Ben Kingsley and Josh Hartnett. - Paladin

With its story of a love triangle between a strong-minded American nurse, a rugged Ottoman soldier and a zealous American doctor, it would be easy to classify “The Ottoman Lieutenant” as a classical romance set in a picturesque Anatolian town at the dawn of World War I. Yet the film, which takes place in the Turkish city of Van — a scene of bloodshed between Turks and Armenians — has been the cause of​ wide controversy both in the West and Turkey.

Despite the attention it has received in the media due to its subject matter, the film has not done well at the local box office, totaling 41,578 viewers so far.

Set in Turkey’s eastern province of Van in 1914, it's a love story between American nurse Lillie (Hera Hilmar) and a Turkish lieutenant, Ismail Veli (Michiel Huisman). American doctor Jude (Josh Hartnett), the reason Lillie came to Van’s hospital in the first place, is also in love with her. The tense triangle comes across in several scenes such as the two men’s fistfight at the hospital over Lillie’s honor and an angry clash of words over ethics as Jude accuses the Ottoman Empire of being an accomplice to the killing of “Christians” by doing nothing to protect them.

Subtle political messages are abundant in the film. When asked to stop the Armenians' rebellion against the Ottoman Empire by his superior, Col. Halil (played by Haluk Bilginer), Veli asks, “How are we to know who are rebels and who are villagers?” Halil replies, “The rebels are the ones firing at you.”

According to one of the film’s Turkish producers, Yusuf Esenkal, in an April 15 interview with the state-run Anatolia News Agency, the film could be called the first Turkish film in Hollywood. He described the film as classic love story, saying, “There is a common pain — and that pain is war.” Stephen Brown, one of the film's producers who will work with Esenkal on another film about the medieval poet Rumi, said he wanted to give an objective account of the common suffering of both Turks and Armenians. "We wanted to show the audience what happened during World War I in Eastern Anatolia, a subject that has not been handled before," he said.

Its reception in the West has been marked by controversy, and terms like “revisionist” and “denialist” have been thrown around. “The Ottoman Lieutenant” was compared to “The Promise,” another recently released film on a similar topic but told from the opposite perspective. “Battle over 2 Films Reflects Turkey’s Quest to Control a Bitter History,” reported The New York Times. The Hollywood Reporter saw the two films as a “battle over the Armenian genocide.”

Back in Turkey, reactions have been mixed. Pro-government newspapers have shown unwavering support of the film, which presents the Armenian “deportation” as reasonable and necessary.

Serdar Akbiyik from the pro-government Star daily describes “The Ottoman Lieutenant” as a love and action film set in the time of “Armenian deportation,” but without pretensions of broad statements regarding historical events. He explains 1915 Turkey as follows: “Think of a country stabbed in the back by a minority that for hundreds of years was considered brotherly — eating, drinking together. … This minority and enemy armies would slaughter the people of the region, and then when the wind turned would pay the price for what they had done, and 100 years later still try to take revenge.”

Ali Saydam from pro-government Yeni Safak took a similar position in his column. Calling the movie a truly professional work, he said that it highlights “the official Turkish understanding of history” on an international scale through cinema. Saydam also emphasized the aggressive political outrage of Armenian lobby groups prior to and during the film’s release in the United States.

Respected Turkish film critic Atilla Dorsay said he found the film "impartial and honest, without maligning any particular camp and leaving little room for objection" but "pretty close to our national views.” However, he expressed astonishment that the famous church on Akdamar Island in Lake Van was briefly mentioned in passing and its beautiful murals were not shown. According to Dorsay, it could have been a powerful message, particularly for Western viewers, to show them and say, “Even in those complicated times, we saved these treasures.”

Other Turkish critics found the film too faithful to the Turkish narrative. Senay Aydemir from the leftist Gazete Duvar panned the film from both political and cinematic angles. Aydemir, who doesn’t shy from using the word “genocide” to describe the events of 1915, slammed the film as devoid of feelings, consistency and narrative tempo. Aydemir cynically described a scene in which Veli saves 20 Armenians from another “evil-hearted” Ottoman lieutenant and lambasted the film's light tone and thin plot that completely omits historical points of interest, such as the political context that led to the Ottoman Empire's decision to deport the Armenians. He also criticized the film's blaming of the Russians for provoking Turkish-Armenian enmity, ignoring the roles played by Germany and the UK.

The plot and actors' performance also got a dose of Turkish criticism: Hurriyet's Ugur Vardan described the story as weak and not believable. He called the performance of Hera Hilmar “expressionless” and Josh Hartnett's “mediocre.” Burak Goral of the secularist Sozcu mocked the censoring of kissing scenes in the version of the film shown in Turkish theaters: “As if an Ottoman lieutenant’s kiss on the mouth of a beloved Christian woman would spoil our Turkishness or our faith!”

Clearly, the film hasn’t found much acclaim in the box office or among critics. Yet it may still be valuable as a depiction of the common Turkish perspective on the deadly Armenian “deportation,” defined by many in the West as genocide.