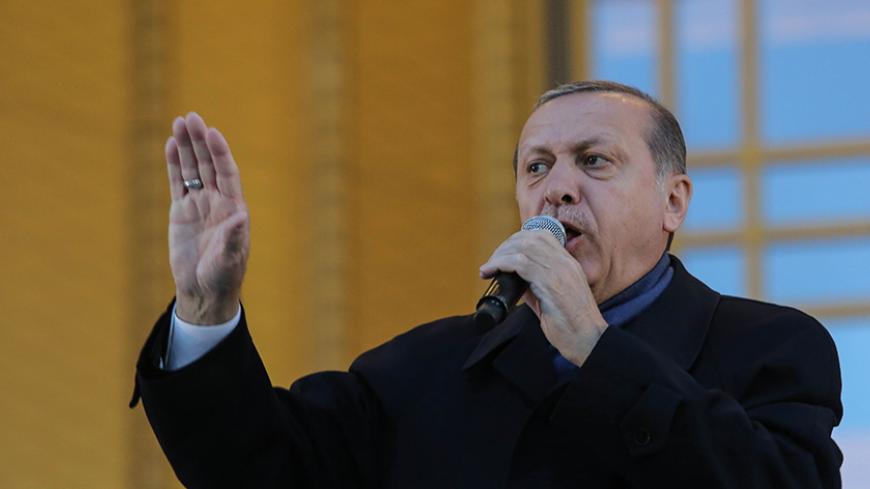 One can never be sure what's going through Recep Tayyip Erdogan's mind when he lashes out at Israel. At a conference on Palestine in Istanbul May 8, Turkey’s mercurial president criticized Israel for “racist and discriminatory” practices against Palestinians. Erdogan added that “the only solution" is "the establishment of a fully sovereign and independent Palestinian state, with East Jerusalem as its capital, along the lines of 1967.” Erdogan also called upon the world’s Muslims to visit Jerusalem “in support of Palestinians.”

Israel’s response came almost immediately. First, the Israeli Foreign Ministry tweeted, “Those who systematically violate human rights in their own country shouldn't preach to region's only true democracy.” Meanwhile, true to his cerebral style, Israeli President Reuven Rivlin responded to Erdogan’s remarks by claiming that Jerusalem has had a “Jewish majority since Ottoman rule” and that “Israel will continue to ensure freedom of religion for all.” (There is no consensus among historians regarding Rivlin’s point about a Jewish majority during Ottoman times.)

But why would Erdogan threaten to derail Turkish-Israeli relations after it took so much time and effort to reconcile the two sides in June 2016?

Selin Nasi, a Middle East analyst and columnist for Hurriyet Daily News and the weekly newspaper Salom, responded to Al-Monitor in an email: “This sudden change of tone toward Israel might be to mobilize the domestic audience around the Palestinian issue. Even though the [presidential] referendum is over, the government acts as if it is still in an election mode. Escalating tensions … might be a strategy to mobilize domestic support and thus to lay the ground for snap elections before 2019.” Nasi added, “The timing of this diplomatic spat is important because May 14 (the fifth day of Iyar) is Israel’s Independence Day, and the following day marks the Palestinians’ Nakba, the Day of Catastrophe.”

Gabriel Mitchell, a doctoral candidate in government and international affairs at Virginia Tech and the US representative of the Mitvim Institute, thinks Turkey wants to maintain and expand its role in regional problems beyond the civil war in Syria. Mitchell told Al-Monitor over email, “Erdogan’s comments seemed timed with several events. First, his meeting with PM Minister Rami Hamdallah. Second, the election of new Hamas leader Ismail Haniyeh. Finally, Trump’s upcoming visit to the region and outward interest in Israeli-Palestinian negotiations.” Not only does Erdogan want to remain a significant regional player, his comments were a reminder that Israel and the Palestinian Authority cannot ignore Hamas.”

Mitchell thinks that Turkish-Israeli rapprochement “is not likely in trouble." He said, "The conditions which drove Israel and Turkey to reconcile still exist — but the mini-honeymoon period, where Israeli and Turkish officials made every effort to avoid commenting on the affairs of the other, may have come to an end.”

Karel Valansi, a Middle East expert and columnist for the weekly newspaper Salom and the website T24, wrote to Al-Monitor in an email exchange that the recent spat “is an unexpected but not surprising development.” Valansi pointed out that officials from the Israeli Energy and Foreign Affairs Ministries had told her how they were expecting to conclude “a deal for energy trade between the two countries … in a matter of 3-4 months.” She went on, “It looks like the flawless progress achieved in the last couple of months was a dream too good to be true.”

Valansi, too, pointed to the role of Turkish domestic concerns in Erdogan’s remarks. “Sparring with Israel was a useful tool to gain and increase domestic support in the past. … There are a lot of conferences and exhibitions going on in Turkey about Jerusalem these days. This may be the result of the approaching Yom Yerushalayim (Jerusalem Day), the 50th anniversary of the unification of Jerusalem following the 1967 War which will be celebrated on May 24 in Israel.”

Like Mitchell, Valansi suggested, “The affair has ended without escalating further. … However, both sides are ready to retaliate if the tension continues.” For now, she added, “Turkish-Israeli reconciliation remains a bold and strategic decision taken in defiance of popular sentiment.”

Whether it will remain that way remains to be seen.