Trump’s first foreign trip as president will be to Saudi Arabia, Israel and Rome, the holy places for Islam, Judaism and Christianity, as he tries to rally the world to unite against extremism and intolerance, aides say. 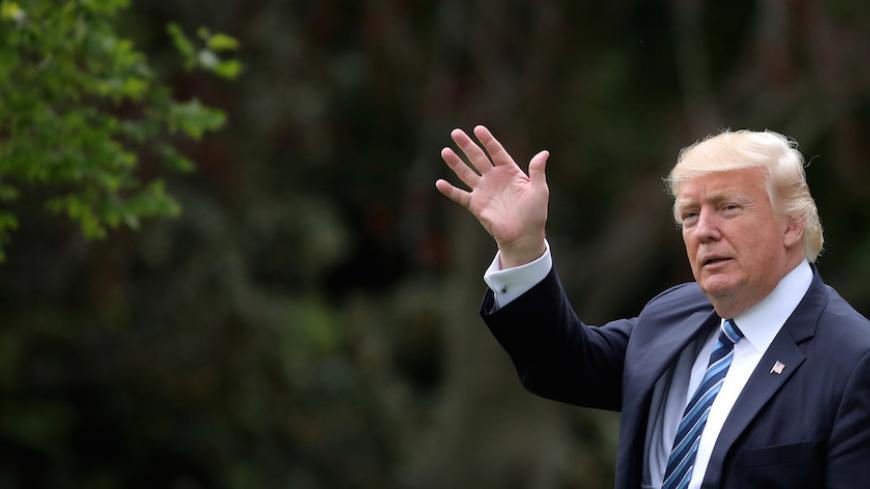 US President Donald Trump waves as he leaves the Oval Office of the White House in Washington before his departure to New York, May 4, 2017. - REUTERS/Carlos Barria

WASHINGTON — On his first foreign trip since becoming president, Donald Trump will travel this month to Saudi Arabia, Israel and Rome, in what the White House described as an effort to rally the world — and the three major faiths symbolized by those locales — together to battle intolerance that has given rise to extremist groups such as the Islamic State (IS).

The itinerary reflects what White House officials described as a way to translate Trump’s “America First” agenda into confident American leadership on the world stage, to reinvigorate old alliances and seek new opportunities for cooperation.

White House officials, in describing the thinking behind the trip, offered a fascinating glimpse into how they see Trump conducting foreign policy largely through building personal relationships and conducting personal diplomacy, and as someone who is ideologically flexible, and not doctrinaire, and willing to adjust plans as the facts change. They also said they have come to see his perceived unpredictability on foreign policies as being an asset that keeps allies and foes alike slightly uncertain.

“Good if they are nervous,” one official described the advice he was given after Trump was elected about countries not knowing what Trump’s foreign policy positions would be.

Trump is expected to depart May 19 for Saudi Arabia, then travel to Israel and then to Rome, where he will meet with Pope Francis, before traveling, as previously announced, to attend a NATO summit in Brussels and then a G-7 leaders meeting in Sicily, Italy, the White House said.

“He chose those three places to unify everyone and the world against intolerance, and focus on how we can unite … against radicalism,” a senior administration official, speaking not for attribution, told foreign affairs reporters and columnists at a White House background briefing May 4.

“The three faiths [can] work together,” a second senior administration official said. “At the core [of those faiths] is a belief in tolerance.”

“President Trump has accepted the invitation of King Salman bin Abdul-Aziz, the custodian of the two holy mosques, to visit the Kingdom of Saudi Arabia later this month,” White House press secretary Sean Spicer said in a statement May 4. “The visit will … allow the leaders to discuss issues of strategic concern, including efforts to defeat terrorist groups and discredit radical ideologies.”

“President Trump has also accepted the invitation of President Reuven Rivlin and Prime Minister Benjamin Netanyahu to visit Israel, where he will further strengthen the United States-Israel partnership,” Spicer said. Trump will also meet with Palestinian Authority President Mahmoud Abbas “to discuss ways to advance peace between the Israelis and the Palestinians, as well as efforts to unlock the potential of the Palestinian economy.”

Contrary to the impression that Trump is cool to alliances such as NATO, his demand for more burden-sharing and to adapt those alliances to contend with current challenges such as terrorism will reinvigorate them and make them stronger, his advisers said.

“The conventional wisdom is that [Trump] is weak on alliances,” a third senior administration official, speaking not for attribution, said. “Actually he’s strong on alliances.”

Trump will “prioritize multinational forums when it is in our interests, and renegotiate the terms when they are not,” the third official said. “The trip will help solidify the resurgence of American strategic confidence.”

The top officials described Trump’s conduct of foreign policy as involving a lot of “personal diplomacy,” and forging relationships with leaders to try to advance US interests with allies and even foes. “It’s a sophisticated approach to take,” the third official said.

“The president is disruptive, but not doctrinaire,” the third official said. “He is willing to leave behind old policies and create new ones.”

Trump is willing to “confront” bad actors, but also look for opportunities for cooperation, the third official said, citing Trump’s May 2 call with Russian President Vladimir Putin. “Let’s take steps together … to try to resolve the war in Syria,” the third official said, describing Trump’s thinking on trying to work with Russia to de-escalate the Syrian war. “We tend to look at divergent cultures. The president stresses our common humanity and our common interests. … American leadership is able to unlock opportunities.”

Trump’s unpredictable positions can be an asset in foreign policy since they keep allies and foes alike slightly off-balance and uncertain as to what exactly he will do, the officials said.

“It creates a lot of opportunities [that] a lot of people don’t know what our foreign policy is,” the first senior administration said.

“He is not dogmatic,” the first official said of Trump. Trump will come up with a plan “and keep adjusting, as the facts change.”

“He does not fit into any orthodoxy,” the official added.

On Saudi Arabia's being the first stop on the trip, the officials said Saudi Arabia reached out after the election to Jared Kushner and others, and in subsequent engagements, have conveyed their commitment to fighting radicalism, as well as their concern about what the officials described as an "emboldened Iran."

“We find a lot of alignment between President Trump and the leaders of the Arab world,” an official said.

The officials outlined four objectives they hope to advance on the trip: 1) uniting the world to fight intolerance and ideological extremism over the long term; 2) stopping money flows to terrorists; 3) better burden-sharing; and 4) countering Iran and defeating IS.

On the last goal, the top Trump advisers seem to have internalized the view, prevalent in the Sunni world, that IS is an outgrowth of Sunni anxiety about Iran.

Asked if they may have leaned too far in adopting the views of their Sunni interlocutors and if they may have missed that the situation with Iran is somewhat more complicated, the first senior official said that Iran supports Hezbollah and sends weapons to support the Houthi rebels. The Trump administration will demonstrate its dissatisfaction with Iran’s behavior in the region with actions, he said. But if Iran wants to talk about it, Islamic Republic officials can pick up the phone and call us, he said, stressing, however, that the administration is focused on actions, not words.