An orphanage in Azaz, near Aleppo and the Turkish border, serves hundreds of Syrian children who lost their families in the ongoing war. 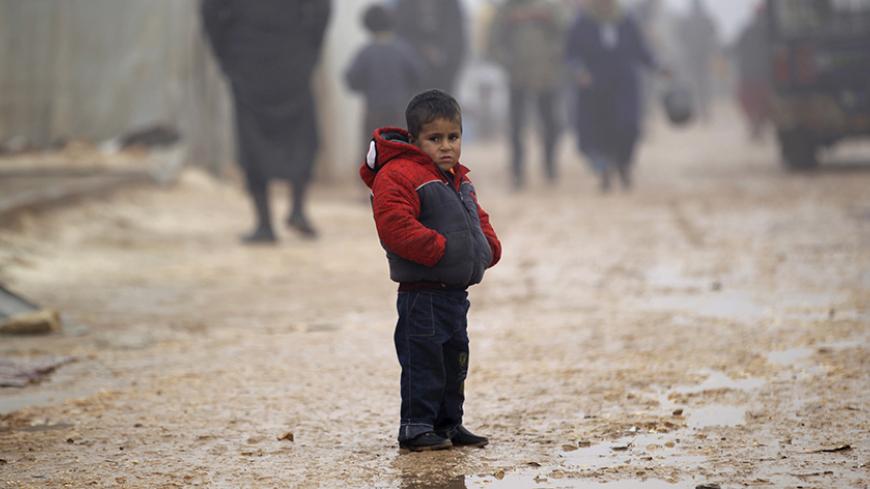 ALEPPO, Syria — Dozens of orphans gathered around Alaa al-Din Obeid in the playground of the Azaz orphanage after their classes were over. The children asked him many questions at once. Obeid patiently answered them, the smile of a caring father on his wrinkled face.

Obeid clapped his hands and told the children gathering around him, “It is time to play now. You have one hour, and then we can start reading. Please do not be late.”

Obeid, a supervisor, spends most of his time with the hundreds of children who live there. He rarely goes home.

The orphanage is located in the city of Azaz in Aleppo’s northern countryside, the biggest city under the armed opposition’s control. It has also become a haven for thousands of displaced Syrians. Azaz is relatively safe, given its proximity to the Turkish border. Turkey has promised to protect it. The orphanage is careful not to be seen as affiliated with any political faction or party.

During Al-Monitor’s visit, Obeid explained its daily program and services provided. He told Al-Monitor, “The number of orphans who want to benefit from the services is increasing. They include Azaz citizens, displaced people living in the city and others from neighboring towns and camps.”

Obeid added, “Seven-hundred children — boys and girls — benefit from the services of the Azaz orphanage. Some of them — 300 boys — live here permanently, while the rest — who are mostly girls — receive health and education services but do not stay here. The orphanage is trying to build a special ward for girls. We hope it will be ready by 2018.”

He continued, “The services and activities of the orphanage are divided into two sections. The first is offered at the orphanage and includes education, health, food, sports, artistic and entertainment activities as well as accommodation. The other section cares for orphans by offering them food and financial aid. There is also the Kafalat project, which the orphanage started two years ago in cooperation with other charities." He said the orphanage relies heavily on endowment projects, charitable initiatives and personal donations to cover its financial needs and pay for the services it provides.

Obeid noted, “The orphanage was established in 1945, but before the Syrian revolution, it … only welcomed 50 children. Since 2012, the number of orphans has risen with the increase of violence, the expanding war and the regime’s fierce shelling of Syrian towns that were no longer under its control, especially Aleppo. Many civilians, including mothers and fathers, died — leaving behind children who still needed care, guidance, love and resources.”

The orphanage did not construct any new buildings to accept the large influx of children. Instead, it rehabilitated what it had, including the medical wing.

He noted, “The orphanage needs a mentor and a psychiatrist to help the children who suffer from psychological problems. This is part of the orphanage’s ambition to improve and develop its services. Children have different reactions, and their psychological states vary once they are at the orphanage. They are traumatized after losing a parent or both parents, depending on their age, and they find it hard to cope with their surroundings. Their new surroundings are unfamiliar, and some become introverted and do not study with their peers. We have a responsibility to help them and support them psychologically and morally until they mature and overcome the trauma and the negative impact of losing their families. If we can find a mentor or psychiatrist, he can share this responsibility and give these children professional help.”

Painful memories still bother Imad al-Din, 12, two years after his father and three of his siblings died fighting for the Free Syrian Army in Aleppo. They were the victims of an air raid that targeted their location in eastern Aleppo at the end of 2014. He told Al-Monitor, “I came with my mother to Azaz in 2015, shortly after my father and siblings died. I have been living at the orphanage ever since, and my mother lives in a rented house with my three younger siblings. I hope we can return to our house in the old city of Aleppo one day and to our neighborhood, Sahat al-Milh.”

The boy seems satisfied with the services offered at the orphanage. He said that the supervisors and teachers are nice to him and encourage him to read and learn to become a better person.

The Syrian war has left behind thousands of orphans, and the local communities are concerned that they might be recruited by the different fighting parties. Syrian children in general are at risk of engaging in armed activity. Orphanages play a pivotal role in improving their living conditions, re-enrolling them in school and providing for them until they can ultimately rely on themselves. Another orphanage opened in Jarablus in October under the auspices of the Turkish Hayrat Humanitarian Aid Association to accommodate more orphans.

Toufic Hassano, a member of the orphanage’s board of directors, told Al-Monitor, “The orphanage employs teachers from the city of Azaz who work from the same curricula taught in public schools affiliated with the opposition’s Directorate of Education. Some volunteers sometimes offer their services by holding entertainment events for the children.”

Hassano added, “The orphanage is in need of more teachers of various specialties to open new classes since current classrooms are overcrowded. But the orphanage is already having a hard time paying the salaries of current teachers and is unable to employ more educators for the moment.”

The Azaz orphanage is the only one in the northern countryside of Aleppo, Hassano said. He hopes more facilities will open soon in the other opposition-controlled areas of Aleppo’s countryside such al-Bab, Marea, Akhtarin and Souran.