Can Russia, West cooperate on Libya?

Moscow sees an opportunity to engage with Europe to help solve Libya’s crisis, and the US president seems ready and willing to stay out of it. 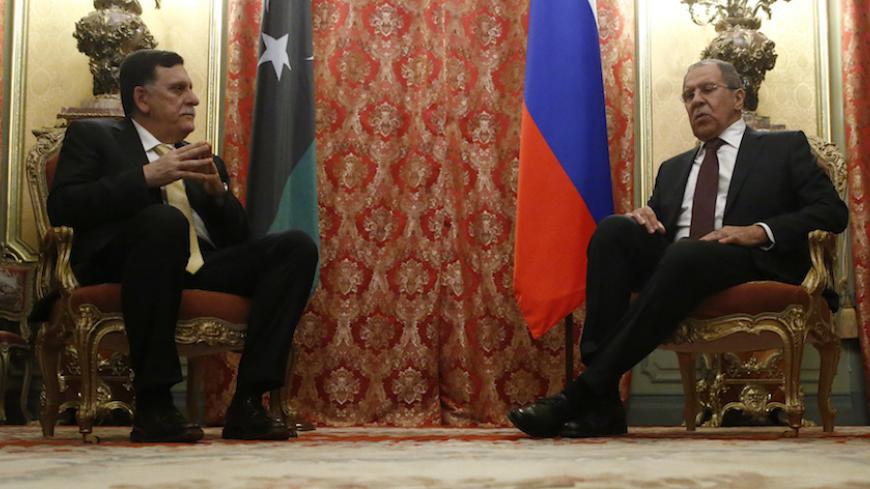 The flurry of international activity involving Libya in recent weeks raises questions of whether more confrontation between Moscow and the West is coming for the country or if some cooperation is possible.

On April 20, US President Donald Trump and Italian Prime Minister Paolo Gentiloni held a joint press conference in Washington. The American leader stated that the only US role in the region is “getting rid of ISIS [the Islamic State].”

Trump’s statement, to some extent, threw light on America’s strategy and confirmed that the administration is reluctant to adopt a hands-on role in Libya. In fact, he seemed to be delegating the responsibility for conflict settlement to regional and, above all, European players.

Libya has been politically and militarily ruptured since President Moammar Gadhafi was ousted and killed in 2011. IS has taken advantage of the chaos, capturing some coastal cities. Meanwhile, two rival governments are struggling for power: that of Prime Minister Fayez al-Sarraj in Tripoli, and that of Tobrouk in the east under the military control of Gen. Khalifa Hifter. Sarraj is backed by the United Nations and, at least nominally, the Misrata Brigades. Hifter has the support of Russia, Egypt, France, the United Arab Emirates and the Libyan National Army.

Efforts to bring the two sides together have produced very mixed results.

Rome hosted an April meeting between Ageela Saleh, president of Libya’s Tobruk-based House of Representatives, and Abdulrahman Sewehli, president of the Tripoli-based State Council. The meeting initially was hailed for producing a hallmark statement about the commitment of once-bitter enemies to getting their relations back on track. Just days later, however, Saleh said the meeting was of little substance.

Additionally, a Misrata military and political delegation visited Moscow and was greeted by legislators and representatives of the Foreign Ministry. The delegation, with the help of Chechen President Ramzan Kadyrov, subsequently secured the release of five crewmembers of the Russian cargo vessel MV Merle who had been detained since early March in Tripoli.

Finally, Abu Dhabi hosted talks May 2 between Hifter and Sarraj after a 16-month standoff between the two sides. According to some Libyan sources, Moscow’s and Abu Dhabi’s unprecedented pressure led to the meeting, which in turn reportedly resulted in several important agreements. Yet it is too early to judge their feasibility.

The flurry allows us to contemplate the prospects of a real breakthrough settlement in Libya and adds a dimension to Russia’s regional policy.

Moscow largely interacts with Hifter through the Defense Ministry, as dialogue with Tripoli remains the preserve of the Foreign Ministry. Such “a division of labor” testifies to the polyphony of Russia's external policy in the Middle East. Just as with Syria, the activities of various Russian ministries and departments complement each other.

Russia employs some tactics that may appear misleading, generating some semblance of internal inconsistency or a lack of congruence. However, looking at strategy instead of tactics reveals that Russian policy in the region in general, and in Libya in particular, is very similar to the West’s in many respects.

Moscow’s involvement in conflict-resolution processes in Syria, Libya and Yemen is commensurate with the engagement of other extra-regional players. Moscow’s presence is heaviest in Syria and lightest in Yemen. Many of the players are wary of Saudi Arabia’s involvement in the civil war in Yemen, where it backs President Abed Rabbo Mansour Hadi and Iran backs the Houthi rebels and former president.

This leaves others at a loss about how to address the Yemeni humanitarian catastrophe. Like other global players, Russia tries to minimize its interference with Middle Eastern affairs and encourages regional actors to increase their responsibility for countries’ development. Moreover, Moscow’s perspective is similar to the West’s regarding the situation on the ground: Military intervention is mainly an instrument allowing the political process to gain momentum.

Meanwhile, there is an apparent discrepancy in interpreting the core of the Libyan conflict, which is both more complex and easier to understand than the Syrian one. On one hand, weak or absent Libyan state institutions derail progress toward a settlement. On the other hand, the approach of numerous parties to the conflict is mainly opportunistic. With the exception of most radical Islamist groups, made up mainly of foreigners, each party is well aware that the conflict is not existential, which is conducive to a compromise.

Russian expert discourse suggests treating all players in the Libyan political space as equal competitors. Military power, international status, political ideology or religious identity are just resources in their struggle for power. From this perspective, the Misrata Brigades are viewed as equal to Sarraj’s government, which, in its turn, has the same status as the Libyan National Army. All these parties should engage in the political process, which requires stable, confidential relations of the intermediaries with each of them.

Meanwhile, developments in recent weeks suggest an emerging rapprochement between Moscow and other external players, facilitated largely by a clearer American stance.

Russian experts point to the increasing Russian-Italian cooperation in the Libyan matter, which could theoretically be supplemented by a Russian-French track. However, the latter is unlikely to take shape until the new French president is settled and with the recent appointment of a new special envoy to Libya.

Moscow attaches immense importance to cooperation with Europe and seems eager to use a potential Libyan settlement in much the same way it used the situation in Syria to engage in political dialogue with Washington. Southern European countries show a more sensitive appreciation of the Libyan conflict than the United States has regarding Syria. Along with the continued advance of political forces that have little or no bias against Russia — take Italy’s populist Five Star movement, for instance — the Libyan situation offers good prospects for dialogue.

Moscow's interaction with the Gulf monarchies, especially with the United Arab Emirates and Saudi Arabia, can become just as crucial and effective. Russia has supported Syrian President Bashar al-Assad, which sets it apart from the UAE and Saudis, but they could all become allies in addressing the Libyan crisis, which will rebuild confidence and help normalize the situation in the region.

North African players are the weakest link in the international interaction chain.

Recent parliamentary elections in Algeria indirectly point to latent socio-political tensions in that country, which will affect its making of foreign policy. Egypt, which has banked on Hifter’s success to lead Libya out of the quagmire, has few opportunities to bring other Libyan forces to the negotiating table. In addition, Egypt is preoccupied with internal security problems. Finally, Tunisia’s unstable domestic political situation impacts policymaking there as well.

Russia's multilevel, interwoven foreign policy allows it to interact with all the vested interests and stakeholders in the region via different channels. It will compensate for the weakness of Algeria, Egypt and Tunisia on a diplomatic level. However, they need some security guarantees to engage in the peace process more actively and fruitfully. None of the major players — Russia, Europe or the Gulf monarchies — can offer them such guarantees today. Until they contribute to the process and until Libya’s borders are open, even the most reliable agreements between intra-Libyan players can be reneged on anytime.