The United States is supporting the Kurdistan Region by developing its military forces, but the support is a balancing act with Baghdad as they oppose building an independent Kurdish army. 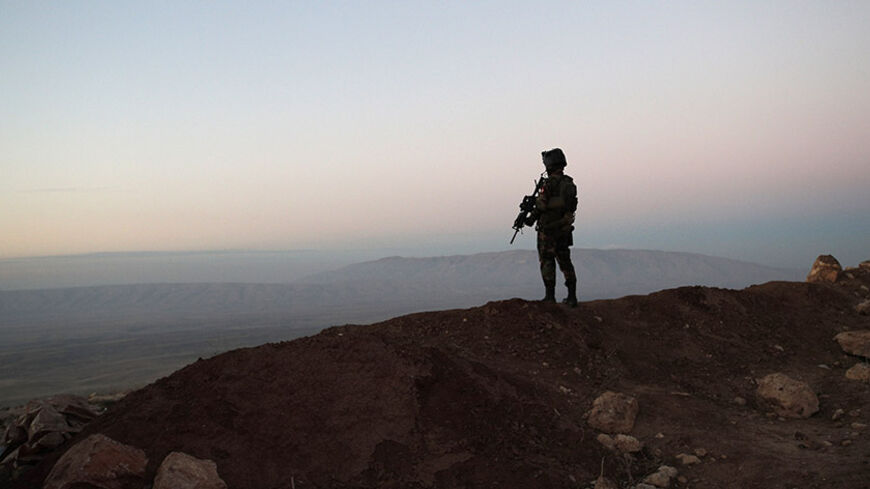 A Kurdish peshmerga soldier is silhouetted during a visit by French President Francois Hollande (not pictured) to a military outpost outside the Kurdish city of Erbil, Iraq, Jan. 2, 2017. - REUTERS/Christophe Ena

Gen. Jamal Iminki, the chief of staff of the peshmerga forces, announced April 29 that the Peshmerga Ministry is seeking to review the structure of the ministry. He noted that the first stage of this procedure would be the reorganization of two brigades with the help of the United States.

On April 19, the Defense Security Cooperation Agency (DSCA), which is part of the US Department of Defense, announced the approval of the United States to sell $295 million worth of weapons and military equipment to equip two infantry brigades in the peshmerga, as well as two artillery support brigades.

According to Bayan Sami Abdul Rahman, the KRG representative in the United States, America is paying for these shipments. Peshmerga Secretary-General Jabbar Yawer described the deal April 20 "as part of the American's ongoing support for the Kurdish forces.”

On April 19, Yawer said in a statement, “Washington has previously provided training, weapons and equipment to two other peshmerga brigades.”

The ongoing war with the Islamic State (IS) promoted the nature of relations between the peshmerga and the US military, according to the March 28 statement of Gen. Stephen Townsend, the commander of the US-led coalition against IS.

In July 2016, the KRG and the US government signed for the first time a memorandum of understanding that includes military cooperation.

The US support of the peshmerga forces is not limited to government agencies, but there are also legislative bodies in the United States supporting KRG projects that are related to obtaining as much autonomy as possible from Baghdad.

In the same vein, US Sen. Marco Rubio expressed April 26 his concern about arming the peshmerga forces through the Iraqi government. “The Kurds have proven to be incredible allies in the fight against radicalism. … I am open-minded to the idea of direct aid.”

The government in Washington, however, has not changed its policy on arming the peshmerga so far, insisting on sending weapons to the KRG through the Iraqi central government.

For years, the KRG has been struggling to obtain military aid without Baghdad’s approval. Kurdistan, for instance, has been benefiting from the services from major lobbying companies to influence Washington’s policies in this direction. These efforts, in addition to fears from some US Congress bodies about Iran’s control of the central government in Baghdad, led to a bill in April 2015 requiring the US government to send aid to the peshmerga without reference to Baghdad.

The bill that dealt with Kurdistan as a state eventually failed. Nevertheless, special forces in the US military have been involved with Kurdish forces in joint raids without gaining Baghdad’s permission. The Iraqi government, however, has managed to circumscribe the direct relations between the two forces.

Michael Knights, a senior security expert at the Washington Institute, told Al-Monitor, “After the notorious Hawija raid in 2015 that killed a US soldier, Baghdad objected strongly to its lack of foreknowledge of the raid. Now the joint US-Kurdish raids are with Baghdad’s permission; this was a condition for the continuation of the US raids.”

Moreover, the American government does not wish to weaken Abadi’s stance, fearing the control of parties close to Iran on the central government.

“The design of the new US-equipped Kurdish brigades is that of light infantry forces capable of fighting [IS], but lacking the heavy equipment to fight a modern army like the Iraqi military. There are no anti-aircraft weapons or tanks, signaling that the US is trying to build a force that complements the Iraqi military, but which cannot conduct major offensive operations on its own,” Knights, who advises the US military, said.

The April 19 DSCA statement stressed “the proposed sale of this equipment and support will not alter the basic military balance in the region.”

The United States does not seem willing to build a parallel force to the Iraqi army in the Kurdistan Region at this point. It is, however, trying to build organized forces in Iraqi Kurdistan that would serve as an ally and that could be easily developed into a modern army if Washington decides to do so in the coming period.