This young Iranian rapper may have cost Raisi the presidency

Iranians wonder whether hard-line presidential candidate Ebrahim Raisi’s attempt to attract young voters by meeting with an underground rapper cost him the election. 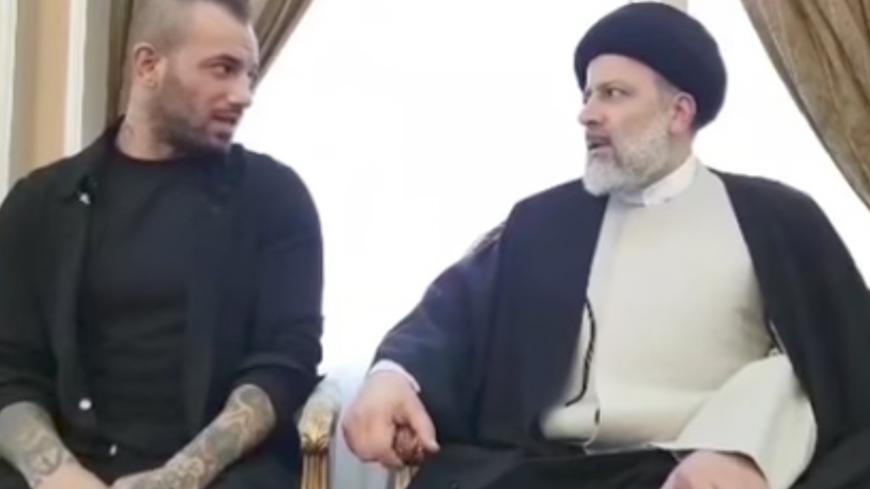 The Iranian rapper Amir Tataloo meets in May with conservative presidential candidate Ebrahim Raisi in this still from a video uploaded May 17, 2017. - Grand Channel Mahdavi/YouTube

Iranian hard-liners are scratching their heads, trying to figure out how they blew the May 19 presidential elections. They have claimed that the vote was rigged and have been in denial over pragmatist incumbent Hassan Rouhani’s sweeping victory, but whispers of another sort have also been heard. Some believe a rapper may have been the reason hard-line cleric Ebrahim Raisi lost his shot at the presidency.

It was a strange sight for Iranians: the rapper Amir Hossein Maghsoudlou, with sleeves of tattoos extending to his hands, sitting beside an awkwardly smiling Raisi, who was dressed in somber black robes. The rapper, also known as Amir Tataloo, is famous for his songs about life and love, but it is his bad boy appearance that leaves his 4 million Instagram and 1.2 million Facebook fans, called Tatalees, swooning and conservatives shaking their heads. At one point, the rapper had long hair, a chin piercing, and to top it all off, he sometimes accessorized with a cross. All in all, a tough sell for Iran’s hard-liners.

Tataloo and Raisi make an odd couple. Tataloo began his career a decade ago as an underground musician, publishing performances and albums online because he didn't have a license from the Ministry of Culture and Islamic Guidance. Raisi is the custodian of the shrine of Reza, the eighth Shiite imam, in Mashhad, with close ties to the supreme leader, Ayatollah Ali Khamenei, the Islamic Revolutionary Guard Corps (IRGC) and intelligence circles. Tataloo has twice been arrested, once in 2013, for appearing on illegal satellite channels — diaspora Persian music networks — and again in August 2016, after which he was imprisoned for 62 days for “encouraging corruption and prostitution among the youth” through his music.

In one video of the Tataloo-Raisi meeting, held days before the vote, Tataloo asked Raisi if he could film a music video in the Imam Reza shrine, but the footage is cut before Raisi responds. A rumor began to circulate that Tataloo had been granted permission to hold a concert at the shrine. Such an event would have been contrary to the approach of Raisi’s father-in-law, Ayatollah Ahmad Alamolhoda, the Friday prayer leader in Mashhad, who does not even allow traditional music concerts in the city. After the meeting, Raisi campaign events and gatherings blasted Tataloo songs on loudspeakers.

Mahmoud Sadeghi, a Reformist member of parliament, said Raisi’s attempt to wrest Tataloo’s young fan base from Rouhani was “Machiavellian” and exploited “people's poverty and distress.” Many Iranians, however, saw through the publicity stunt and called out Tataloo and Raisi’s hypocrisy on social media. The hashtag #Tataloo_Raisi (تتلو_رئیسی#) quickly began trending, and Iranians reveled in the irony of a hard-line cleric being endorsed by a man who is more comfortable with unveiled women on his arm and costume parties dressed as a caveman.

The odd couple might not be so odd, however. In 2015, Tataloo released the video “Nuclear Energy.” Rapping on the deck of an Iranian naval ship with sailors as backdrops, Tataloo boasted, “Having an armed Persian Gulf is our absolute right.” The video debuted days before the signing of the Joint Comprehensive Plan of Action in July 2015. The rapper’s appearance and antics surprised many Iranians, who came to view Tataloo as a sellout to the hard-liners. The image of the rapper as a fanboy of the IRGC seemed to be reinforced by his support for the supreme leader on Instagram on numerous occasions and his even speaking favorably of the mandatory hijab.

Ironically, Tataloo initially endorsed the conservative mayor of Tehran, Mohammad Bagher Ghalibaf, for president, a man who in 2014 banned the teaching of music in cultural centers. The rapper recorded an audio message on his Telegram channel saying he knew nothing about politics and that his political Instagram posts favoring Ghalibaf had been forwarded by a “friend” in the IRGC with “enough political information to provide us with excellent guidance” about the May 19 elections. Tataloo then backpedaled after Ghalibaf dropped out of the race in favor of Raisi.

It is unclear whether Iranian authorities had forced Tataloo to publicly support the hard-line candidate. Many Iranians think the rapper sided with Raisi in the hope of becoming a legal and licensed singer should his preferred candidate win.

On the eve of the elections, Rouhani supporters took to the streets to mock the meeting between Raisi and Tataloo. Jokes and memes were posted online. One popular meme depicts a very serious Raisi superimposed over the character played by the actor Liam Neeson in the movie “Taken.” The image is captioned, “I will look for you, I will find you, and I will kill you Amir Tataloo.” The same image is also captioned, “Do you know what it means to begin the elections as a potential supreme leader but leave it as a ‘Tatalee’??” Another popular meme is of Khamenei, with his hands on Raisi's shoulders, saying, “That is how you wanted to replace me? Instead of a president you became a ‘Tatalee’?” One Twitter user juxtaposed the photo of the Tataloo-Raisi and one of the rapper Kanye West meeting with President-elect Donald Trump.

As election results poured in May 20, many on social media argued, some jokingly, that Raisi’s meeting with Tataloo may have cost him the election — or 4 million ballots to be exact, a reference to the rapper’s 4 million Instagram followers. Even Payam Fazlinejad, former editor-in-chief of the conservative magazine Asre Andisheh, wrote on Twitter that Rouhani’s win wasn’t surprising, asserting that not all Ghalibaf supporters voted for Raisi because meeting with Tataloo had “caused a disaster.” How many votes Raisi actually lost because of his stunt is unclear, but what is certain is that the cleric appears to have permanently damaged his image in some hard-line circles.

Once it became clear that Rouhani had won the elections, Tataloo took to Telegram to announce to his more than 290,000 channel subscribers that he would be abandoning the app used by millions of Iranians. The rapper continues to post on Instagram, however.

To say Raisi lost the election due to Tataloo may be an exaggeration, but the idea of a rapper shooting down a hard-liner’s chance at the Iranian presidency is entertaining. And let’s face facts: Whether he likes it or not, Raisi is now a Tatalee — for life.