The Palestinian Education Ministry launched an initiative to issue Palestinian pounds to be used in schools, in an attempt to introduce students to their national currency, which has been off the market since the end of the British Mandate in 1948. 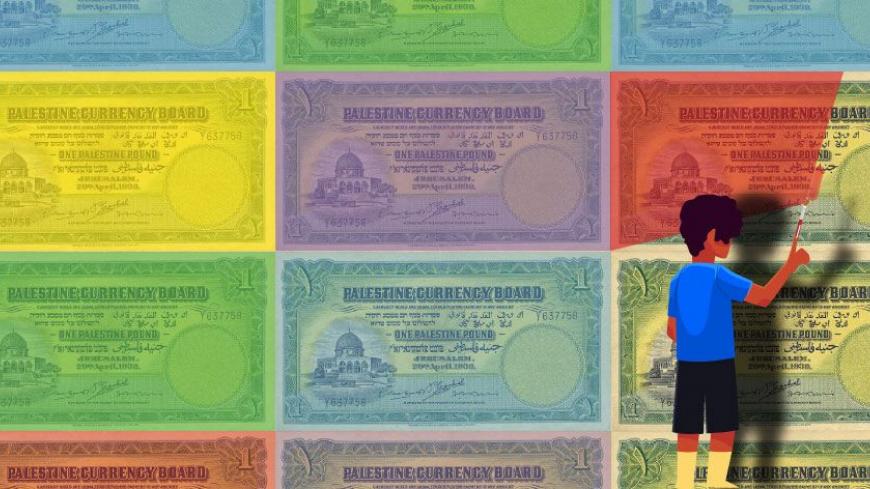 RAMALLAH, West Bank — Hamza Abdul Hadi Jawabra, a 15-year-old student, does not know what the Palestinian pound is. He said that he only knows the shekel because he gets his daily allowance in Israeli shekels, and he sees his parents holding Jordanian dinars and US dollars. His father, who works as a public affairs officer at An-Najah University in Nablus, gets his salary in dinars, while his mother who works at Al-Mada press in Ramallah is paid in dollars.

Jawabra was surprised to find out when talking to Al-Monitor that there is a Palestinian pound and he asked spontaneously, “How does it look?” He said he would be happier getting his allowance in Palestinian pounds.

Jawabra, like other Palestinian students, knows nothing about the only known Palestinian currency in history — the Palestinian pound issued during the British Mandate (1927-1948).

The Ministry of Education and Higher Education, however, is starting an initiative to introduce children to the Palestinian pound, allowing them to use it to purchase food in school cafeterias.

The Ministry of Education announced March 23 an agreement with the Palestinian Monetary Authority (PMA) to use the Palestinian pound as a symbolic currency in schools in the West Bank.

Minister of Education and Higher Education Sabri Saidam said in a press statement on the same day that the ministry agreed with the PMA to print Palestinian pounds to be used in schools. This step carries deep significance that “strengthens the values of the next generation based on targeted national and social dimensions preparing for independence,” Saidam said.

Speaking to Al-Monitor, Sadeq al-Khodour, the general director of activities at the Ministry of Education, said that the aim behind the initiative is to “try to connect students to the banking system that was in place in the past and that used the Palestinian pound. This is a step to break free from economic dependency on Israel.”

Khodour added that the Ministry of Education is waiting for the PMA to finish printing Palestinian pounds to use them starting May 1, during the remaining part of the current school year ending in June.

The initiative is mainly taking place in public schools as a first stage and is set to be launched in private schools at the onset of the next school year. Khodour said, “Many students have siblings or relatives in private schools. So the initiative’s restriction to public schools might create a contradiction in the message we are trying to get through. For that reason, this initiative should be launched in all schools.”

According to Khodour, before starting to use the Palestinian pound, the public schools in the West Bank, which amount to 1,780, will launch an awareness and cultural campaign through the school morning broadcast to explain to the students the goals, mechanisms and meaning of this step.

This initiative in schools brings to mind the declaration of the PMA in April 2011 about its intention to issue a Palestinian currency to be traded. But the initiative never came through due to several obstacles, mainly the Israeli occupation, according to the PMA.

A source from the PMA’s public relations office told Al-Monitor on condition of anonymity, “The issuance of the Palestinian currency banks on political and economic considerations as well as previously set conditions that would ensure the success of the issuance and the preservation of the currency’s value, strength and stability.”

According to the PMA, the economic and political conditions that Israel left for the Palestinian Authority (PA) — including its lack of control over crossings and borders; its lack of freedom of movement, access and ability to export and import; the constant deficit in the general budget and the balance of payments; and the increasing unemployment rates — have all made the economic situation unsuitable for the re-introduction of the Palestinian pound.

Nevertheless, the PMA source said the PA’s efforts are ongoing, noting that it has worked on logistic and technical demands, and it is doing what is feasible as per its available capacities to issue a national currency and manage a suitable monetary policy.

Although this is a simple initiative, using the Palestinian pound in schools will give students a different and special experience and will grant them a sort of financial independence through a Palestinian currency that represents their country.