Why did Erdogan sign emergency decree on laser hair removal?

In a last ditch effort to mobilize the "yes" vote for the April 16 referendum, Turkish President Recep Tayyip Erdogan resorts to unconventional methods, shocking Islamists and seculars in Turkey. 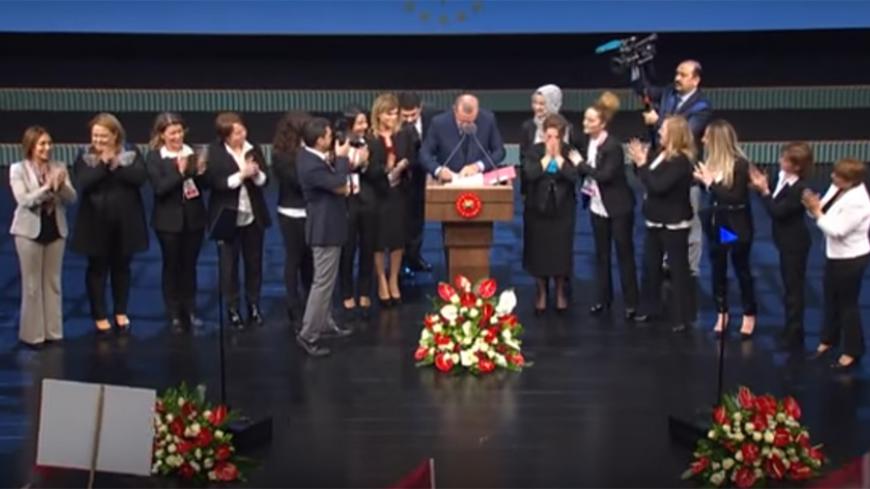 On March 29, Turkish President Recep Tayyip Erdogan gathered beauticians at his 1,100-room palace as he signed into law an unprecedented emergency decree on hair removal. The rally, “For a beautiful Turkey, of course, yes,” was aired live on television. After speaking for an hour about the upcoming referendum to an audience of meticulously turned-out beauty experts who cheered “yes” for Erdogan nonstop, the president showed the emergency decree to the crowd, and as a group of beauticians circled him on the podium, he signed the decree into law on live television. He also read parts of the law, carefully omitting words such as “hair removal,” but warmly congratulating the women for their dedication.

The hair removal regulation was published in the Official Gazette on March 30 and went into effect immediately. In a nutshell, the emergency was to grant beauticians the right to operate certain tools to perform laser hair removal.

Who is authorized to operate laser hair removal instruments is the core of the current decree. The Justice and Development Party (AKP) has provided various versions of the legislation since 2006, expanding and limiting the options for beauticians. Dermatologists argue that certain types of instruments to remove hair from its roots permanently through the utilization of lasers should not be allowed in beauty salons. Over the years, there have been thousands of cases where people seeking hair removal were hospitalized with severe burns and other skin deformities and infections due to improper applications of the technology. So the Health Ministry decided only hospitals or clinics that pass its approval should be permitted to operate these machines.

Considering that Turkey is going through a prolonged state of emergency, why did hair removal get a live audience and an hourlong ceremony at the palace? Turkish social media users were initially shocked, and several sardonic comments followed the event. Here are some of them:

Although Erdogan appeared quite cheerful with the beauty experts at the palace, his advisers and pro-AKP media members preferred not to comment on the issue or engage those who posted sarcastic comments on social media. Why would Erdogan sign such an issue into law on live television? One answer from critical corners was that he did it because he could. Seasoned journalist Unsal Unlu produced a Periscope news session titled “With one decree we are more beautiful, what else can we ask for?” and explained the powers of emergency decree. Erdogan signed the law simply because, why would he not? What Turkey is experiencing is almost like a dry run for the expected all-powerful presidency slowly turning absurdities into the norm. Erdogan has the power and is not afraid to push the limits.

The second reason was that it was a great photo opportunity for the “yes” camp for the April 16 referendum: Several young and charming women were waving "yes" flags and cheering for Erdogan at a time when he needs their endorsement the most.

The third reason is the economic hardship many beauty shops are experiencing. While the often-overlooked beauty industry is a growing sector in Turkey (it was announced in December that the sector has grown 6% since 2014), it has many pockets that are struggling. Although the average spending per person is significantly below European rates, with Turkey's young population this is expected to grow. Also, beauty salons are popular among young people for hair removal because the shops provide a cheaper alternative to professional clinics.

Not everyone was happy about the rules change.

Al-Monitor spoke with three prominent dermatologists in Istanbul and they were all concerned that this permission would cause more harm than good. One dermatologist said, “There is insufficient professional guidance for performing these procedures. Also many of these hairdressers or beauty salons are small-scale, and therefore most can only afford secondhand, malfunctioning instruments that cause serious burns and other damages.”

Another group that was silent was the Islamists. Islam speaks in detail about personal hygiene. Islamic scholars mostly agree that the Prophet Muhammad cursed women who were plucking their eyebrows. Changing one’s God-given image for vain purposes is considered inappropriate both for men and women. Although women are permitted to remove their body and facial hair in order not to resemble a man, exposing private parts to a stranger is not acceptable. And since laser hair removal cannot be performed by a person on herself, that is not considered Islamic.

Al-Monitor asked dermatologists of Istanbul about their customer base, and was told that on average about 15-25% of their customers are straight males who come in for removal of facial hair above the cheekbones, on their arms, back and pubic area. Most women ask for a permanent complete body hair removal. So the laser hair removal emergency decree could not be considered an Islamist accomplishment. One theology professor told Al-Monitor, “It used to be rare, but now it has become the norm among Islamist men to have hair implants and also regular facial hair removal, and among women shaped and reshaped eyebrows, knowing well that this is not permitted. They do not even seem to bother hiding it. Still, I know there is a pious section of society who could not bring themselves to watch Erdogan signing that decree. It is embarrassing for us.”

So why the decree? It appears that for the first time in his more than two-decade-long political career, Erdogan has not been able to play the victim as much as he would like before an upcoming election. In the past, most Turks rallied around him as the underdog, but now the sympathies he received from the July 15 coup attempt seem to have expired. So just weeks before the referendum, Erdogan and his cohorts started a distribution of rewards or bribes of rather creative sorts to a surprising section of the society. It seems that a laser hair removal decree could be a lucrative one that provides pretty photos, job opportunities and votes for the short term.