The use of chemical weapons in Syria has led members of Iran’s Islamic Revolutionary Guard Corps, a fighting force that remembers the horror and uncertainty of the Iran-Iraq War, to be both angry and cautious about blame. 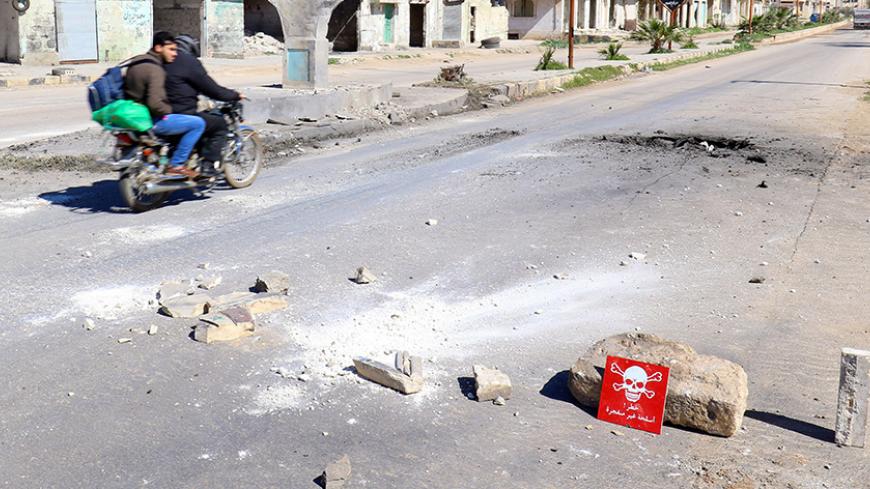 Men ride a motorbike past a hazard sign at a site hit by an airstrike in the town of Khan Sheikhoun in rebel-held Idlib, Syria, April 5, 2017. The hazard sign reads, "Danger, unexploded ammunition." - REUTERS/Ammar Abdullah

When the news of the chemical attack in the Syrian town of Khan Sheikhoun came in on April 4, Ali texted his close friend Taghi to come over after work. They had served together during the long and brutal 1980-88 Iran-Iraq War, in which Iraq began dropping chemical bombs as early as 1981. Ali and Taghi, who asked that their last names not be published, were members of a battalion in the Islamic Revolutionary Guard Corps (IRGC) when they were exposed to mustard gas and nerve agents. Today, Ali can walk for barely 10 minutes without having an asthma attack, has to sleep with an oxygen mask at night and has had over 40 surgeries on his eyes. Ali’s vital organs have been burning from the inside for the past 26 years. Despite working in the IRGC for another 10 years after the end of the war, he had to retire in his 40s, and he relies on his close friend to keep him abreast of the outside world. Taghi is now a captain in the IRGC.

The two men sat watching television all evening, flipping between the news of the chemical attack on Iranian state television, which blamed jihadi groups for the incident, and satellite TV stations based in London and New York, which squarely assigned fault to Syrian President Bashar al-Assad. “War is not just what’s fought on the battlefields,” Ali told Al-Monitor. “It’s as much about the public relations side of it all.”

The two debated all night about which side was actually behind the attack, exchanging text messages in secret chats with their close senior friends in the IRGC via messaging apps that erase the chat logs after a designated time. Taghi knew that the IRGC and the Iranian government officially blamed the anti-Assad forces, but having had personal experience with chemical bombs, he and his friends knew that they couldn’t stand behind Assad if it turned out that his regime had carried out the attack.

But as time went on and the reactions to the chemical strike became increasingly political, especially from the United States, Taghi and Ali sensed that something was amiss.

Taghi told Al-Monitor, “I was near Halabja in Iraqi Kurdistan when the civilians got gassed by chemical bombs in 1988. We rushed in to help transport the survivors to hospitals. Over 5,000 civilians died in that horrific attack, and I remember distinctly that for two months after the attack, the US government and Western press were loudly blaming Iran for the attack. Of course, it later became apparent that Saddam Hussein’s military gassed its own people, with chemicals supplied by the West.”

He added, “This is why I get suspicious when the United States and its Arab allies rush to scream that Assad’s forces were behind an attack like this in Syria before any independent investigation has been conducted.”

On April 9, two days after the United States fired 59 Tomahawk missiles at a Syrian air base in response to the chemical attack, Iranian Foreign Minister Mohammad Javad Zarif tweeted a call for an impartial international inquiry into the April 4 incident. He noted, “Having been the only recent victim of large-scale, systematic and frequent use of chemical weapons — perpetrated with impunity by Saddam Hussein through much of his eight-year war of aggression against Iran — the Islamic Republic of Iran is unshakable in its unequivocal condemnation of all uses of such heinous and illegal armaments, regardless of the perpetrator or the victim.”

Vahid, a high-ranking official in the IRGC who asked that his last name not be published, told Al-Monitor, “We remember when Iraq used chemical bombs all throughout the war on Iran, and the international community didn’t even come to do an investigation for the first three years, as much as Iran’s leadership asked them to. Western powers and their media outlets were even accusing Iran of using chemical weapons during that time.”

He added, “When the United Nations finally did its first investigation in 1984, they concluded that Iraq had in fact used chemical weapons multiple times on Iranian soldiers and civilians. But the Security Council ignored those findings, as well as similar findings in 1986 and 1987. Our side kept being demonized, and we were the ones who had the chemical bombs being dropped on us, with the full knowledge of the international community. The chemical attacks continued until the very last days of the war.”

Another senior official in the IRGC who works in Iran’s Syria policy and agreed to talk to Al-Monitor on condition of anonymity said, “Look, we know what it’s like to be on the receiving end of these bombs. It has completely ruined the lives of many of our close friends we fought with during the war in the 1980s, as well as countless civilians in both Iran and Iraq. If it becomes apparent that Assad did use these bombs, trust me that there will be extreme pressure from within the [IRGC] to take a different course.”

He added, “But we also understand how the United States functions in these circumstances. The only way we can know for sure who was the perpetrator behind these attacks is to invite an impartial international investigation. Nothing in war is ever 100% clear in the immediate aftermath, especially when there are so many hands involved in a conflict. The fact that the United States and its allies don’t even want an international investigation should raise many eyebrows.”

Vahid said, “We will unconditionally condemn Assad if the independent investigation proves that he was behind the attack, but we ask for the investigation first. After the long history we have had with Western powers lying about events in the Middle East in order to shift power back in their favor, we understandably don’t trust their intelligence services until they are corroborated by an independent international investigation.”

Back in Ali’s living room, the news is followed religiously, with constant flipping back and forth between domestic and international channels. Having fought a war, Ali knows how dirty the politics surrounding armed conflict can be. It’s hard for him to trust any side.

“Only time will tell,” he said, staring at the television. “But all I know is that the only ones who will suffer for the rest of their lives are the survivors. The politicians and policymakers will forget about the survivors in the weeks to come, as they go on with their business, playing with all of our lives. They profit from this. It’s those poor survivors who have hell to look forward to. I don’t wish what I’ve been going through the past 26 years on anyone …” He trailed off, shaking his head, muting the television and turning his attention to his tea.