The Demashq cafe in the West Bank city of Jenin mimics the architecture and atmosphere of a traditional Damascus cafe, taking customers back to the days of a peaceful Syria. 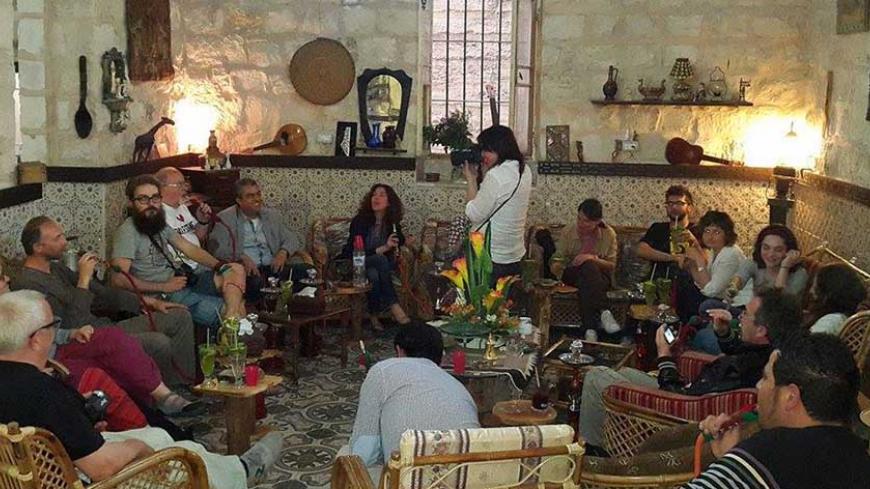 RAMALLAH, West Bank — At the entrance of the city of Jenin in the northern West Bank, a sign with the name “Demashq” (Damascus) is placed atop an abandoned house dating back to 1929. Palestinian artist Ghassan al-Sadi from the city of Jenin started renovating the house in February 2015 and has turned it into a Damascus-style cafe.

Sadi told Al-Monitor that he supervised the hiring of all the staff before opening the cafe on March 28, 2015, which has now become a replica of an ancient house and cafe in Damascus. The cafe is mostly known for its courtyard, which has a Damascus-style fountain, surrounded by dozens of small trees and ornamental plants, roses hanging from the walls and arches designed by Sadi to mimic the architectural design of a cafe in Damascus.

Today, Sadi is working on opening a new section inside the Damascus cafe for women and families only. He named it Halab (Aleppo) cafe and it is expected to open by the end of April. The new cafe was built above the original one, so customers sitting on the balcony can see the courtyard and the fountain.

Sadi’s new cafe creates the atmosphere of an old house in Aleppo through its window designs, arches and the colors of the tile and paint. It will be divided into different sections with an area for old musical instruments and another area with pictures of revolutionary men such as late writer Ghassan Kanafani and Argentine-Cuban Revolutionary Che Guevara.

Sadi, who did not attend art school, told Al-Monitor that he was able to develop his skills in art, sculpture and design on his own. He accumulated experience by working in the field for years, which enabled him to become more innovative and creative in design. This helped him in evoking the soul of Damascus and bring it to the city of Jenin by designing the cafe’s arches and courtyard and using specific types of tiles that give the place an antique look.

“I am very attached to Syria. I feel as if my soul is connected to Damascus and its neighborhoods. I think this is why I have always had this dream of finding an old house in Jenin with a garden so I can renovate it and turn it into a Damascus-style cafe,” Sadi said.

Not only did Sadi choose the cafe’s design, he also offered customers the chance to taste special Syrian sweets and drinks. The menu includes Bakdash ice cream and Mate tea in an attempt to complete the elements of the perfect Damascus scene. Yet all of the cafe’s chefs and staff are Palestinians.

Sadi, who funds the cafe from his own pocket, does not see it as a commercial project only, but rather as a cultural one that carries the spirit of an old cafe frequented by intellectuals, politicians and college students. For this specific reason, the entrance is decorated with pictures of late Egyptian President Gamal Abdel Nasser, Guevara and Kanafani. The inside of the cafe is filled with ancient artifacts and antique pieces, so younger generations can have an idea about how life in Damascus used to be. In addition, patriotic songs and anthems are always playing.

Syria's yearslong war encouraged Sadi even more to open the cafe. He said, “Despite war and destruction in Syria, my cafe aims to spread culture, awareness and teach the new generation about [Damascus] history, by evoking the beauty and culture of the city. The cafe’s artistic aspects are the best way to counter dark and unjust ideas. The ideology of the Islamic State is adopted by backward, ignorant people, and our role is to spread culture, beauty, originality and Arabism. This is the cafe’s true message.”

Sadi plans to dedicate a section of the Damascus cafe to books about the political, social and cultural history of Palestine and the most prominent figures in Palestine and the Arab world, as well as the history of the Levant, which includes Syria, Palestine, Lebanon and Jordan.

Many Palestinians who lived in Syria in the past come to the cafe to relive old memories. Ghassan Massad from Jenin, who studied law at the University of Damascus in the 1990s, told Al-Monitor, “At first I was surprised by its design and form, and I had no doubt that it truly carries the spirit of Damascus and the Levant.”

He said, “When I visited the cafe, it brought back memories of the Fountain Cafe, one of the oldest restaurants in Syria, which I used to visit along with other college students, as well as intellectuals and politicians. Damascus cafe resembles that old cafe to a great extent.”

Massad added, “What Sadi has done is create a message of loyalty and love toward Syria. Damascus cafe gives you the impression that you really are in a Syrian environment.”

Abdulsalam Jawabreh, a professor of arts at Silat al-Harithiya School in the Jenin governorate and a regular customer at the cafe, told Al-Monitor, “The cafe has created a pure Damascus environment, which some Palestinians find familiar, since certain Palestinian areas such as Nablus are called Little Damascus.”

He added, “The cafe’s design shows a great level of professionalism and quality through the selection of designs and colors and the work of wood and tiles, all of which create a beautiful link between the various components of the cafe.”

As Sadi continues to expand the cafe’s sections and add more artifacts to the place, he insists on having his cafe convey a cultural message amid the many cafes in Ramallah that target young people in particular.