Israeli politicians are arguing that at least 10 years of calm and negotiations are required before the possibility of founding an independent Palestinian state. 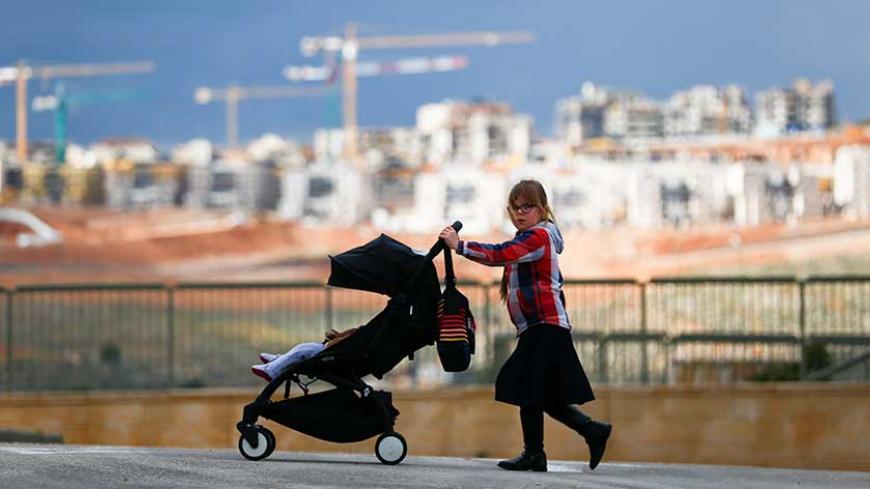 A girl pushes a stroller in the Israeli settlement of Beitar Illit, on the occupied West Bank, Feb. 15, 2017. - REUTERS/Amir Cohen

The most prominent Israeli politician with a chance of replacing Israeli Prime Minister Benjamin Netanyahu believes that peace with the Palestinians will take decades. Speaking at a rally in Netanya, north of Tel Aviv, on March 26, Yair Lapid, chairman of the center-right Yesh Atid, said “Any negotiations with Palestinians would need to be conducted in very slow stages.” By “slow” he meant 15-20 years.

Earlier, Israel’s current opposition leader, Isaac Herzog, had called for a decade of calm before any peace process could bear fruit. The Israeli Labor Party leader on Feb. 23 outlined a 10-point plan that called for 10 years of absolute calm on the west bank of the Jordan River, anchored and supervised by a UN Security Council resolution, before a Palestinian state could be truly independent.

It is not clear why such extended periods are deemed necessary before implementation of the internationally accepted two-state solution. While some might argue that the above statements were made in light of the growing expectation of early Israeli elections, according to some politicians and analysts, there is no doubt that the politicians making them believe that they are what the Israeli public wants to hear.

The long years that these politicians are advocating ironically correspond with two other long-term US-led plans to help Israel defend itself. The Iran deal, sponsored by the United States and the international community, constrains the nuclear activities of the Islamic Republic for 15 years. In September 2016, the administration of former US President Barack Obama signed a memorandum of understanding with Israel, in which the United States committed to supporting Israel with a huge, $38 billion military grant over a 10-year period.

Of note, 10 years is also the length of time that Israeli Prime Minister Yitzhak Shamir had reportedly suggested in June 1992, in the wake of the Madrid peace conference, that he would drag out peace talks (had he remained in office). So far, the talks over the last 25 years have largely been fruitless, the exception being the Oslo Accords, which allowed the return of the Palestinian leadership to the West Bank but also resulted in the tripling of Jewish settlers in the occupied Palestinian territories.

While these long-term Israeli proposals are depressing to Palestinians, they are not surprising. They reflect the lopsided power dynamic in favor of Israel — the main reason why the peace process has not borne fruit, remaining a process without a peace. Of crucial importance to Palestinians are the Jewish colonial settlements. Any delay in granting Palestinians the right to establish a sovereign state without totally and unambiguously freezing all settlement activity would be self-defeating. As Palestinians have often said, negotiating while the other side is settling the land that is the focus of negotiations is like trying to reach agreement on who a pizza belongs to while the other side is busy eating it.

In addition, further delay in ensuring the creation of an independent state will be a major blow to the current Palestinian leadership and likely usher in new, more radical leaders. Some current leaders, including Mahmoud Abbas of Fatah and the Palestine Liberation Organization and Khaled Meshaal of Hamas, will soon leave the political stage to others regardless.

In Fatah, the most popular leader is Marwan Barghouti, who is expected to initiate a mass hunger strike among Palestinian prisoners in Israeli jails April 17. In February, Hamas cadres in Gaza elected hard-liner Yahya Sinwar as the movement's leader, while former Palestinian Prime Minister Ismail Haniyeh seems set to replace Meshaal.

While it is hard to say whether Israeli politicians’ expectations of calm for a decade or two will materialize, it is absolutely clear that one type of Palestinian protest will continue for years to come. Nonviolent protest, especially the boycott, divestment and sanctions (BDS) campaign, will certainly grow in strength and effectiveness as the world realizes that Israel in fact has little interest in resolving the conflict with the Palestinians despite its long-standing talk of peace.

The arrogance of Israeli politicians arguing for an almost indefinite continuation of illegal occupation and colonial settlement stems from one simple fact: The cost of occupation is so cheap that it gives them little incentive to tackle it, as the Israeli population has moved farther right and become more hawkish on the issue. The situation will only change once Palestinians, Arabs and the international community make Israel pay a serious price for its continued occupation and violations of human rights.