How Palestine is working to stop antiquities theft

Thousands of artifacts that were smuggled outside the Palestinian territories have been seized in the past years as part of the Palestinian government’s efforts to put a stop to illegal excavations and antiquities trade. 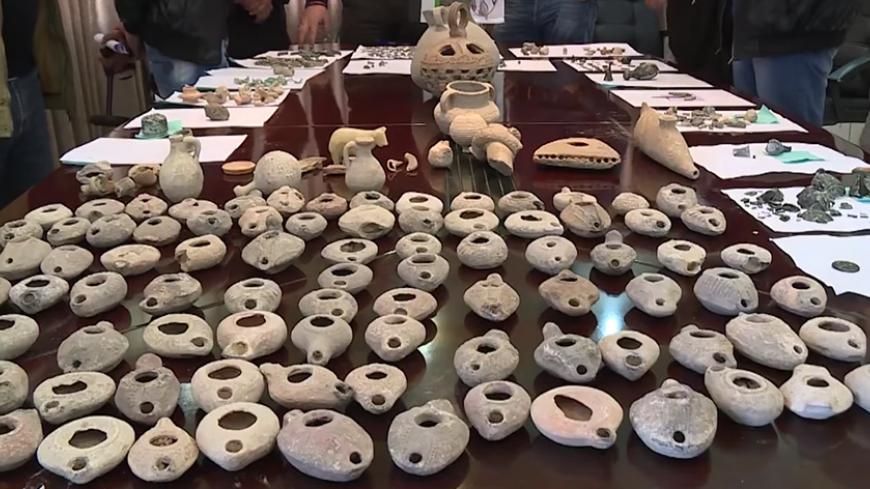 Police display antiquities they seized from smugglers in Nablus, the West Bank, in this video still. Uploaded on Feb. 26, 2017. - YouTube/Nablus site news

RAMALLAH, West Bank — On March 16, the Palestinian police foiled an attempt to smuggle an antique statue from the city of Nablus in the West Bank to be sold outside the country. A week before, the police had announced the arrest of five people on charges of illegal excavations of antiquities in Jenin. On March 5, the police seized a 2,500-year-old mill in a house in Hebron.

Police spokesman Louay Zreikat told Al-Monitor that thwarting smuggling attempts of antiquities is seen as a major achievement by the police, because in the past it has been easy to smuggle antiquities abroad. Today, Palestinian police have been increasingly able to control and foil these operations.

“We have lost several relics and antique statues in the past. We are better equipped today to track down illegal excavators and thus thwart more smuggling operations. In March, we were able to recover relics that are more than 4,000 years old.”

These smuggling and illegal attempts are nothing new. Since its inception, the Palestinian Authority (PA) has been dealing with ongoing attempts on the part of antiquity dealers stealing relics through illegal excavations. According to Saleh Sawafta, the director general of the Antiquity Protection Department at the Palestinian Ministry of Tourism and Antiquities, this has caused the loss and smuggling of hundreds of pieces outside the country, first to Israel and then abroad.

Sawafta told Al-Monitor that the theft of antiquities from Palestinian territories started with the Israeli occupation of the West Bank and Gaza Strip in 1967. Many of the archaeological sites were looted, which made it difficult to keep records of the stolen pieces.

Since it came to control the West Bank in 1995, the PA has been employing concerted efforts, specifically in the areas under its full control, to prevent theft attempts. However, the most challenging task to this effect, according to Sawafta, is in Area C, which is out of the PA control, and where 60% of the archaeological sites are located — estimated at about 7,000 sites and 50,000 historical buildings.

Sawafta said that in 2015, the number of seized antiquities registered with the Ministry of Tourism and Antiquities was estimated at 20,000 pieces. This figure, however, dropped in 2016 to 2,400 pieces, most of them taken from Area C. The ministry has yet to determine the value of these pieces.

Sawafta noted that the seized relics are not just pottery, metal or stone artifacts but mostly metal pieces, as smugglers rely on metal detectors in digging up antiquities.

Jihad Yassin, the director general of the Archaeological Excavations Department at the Ministry of Tourism and Antiquities, told Al-Monitor that Palestine was the center of attention for many exploration teams between 1885 and the occupation of the West Bank in 1967.

“During the Israeli occupation and before the advent of the PA, Palestinian antiquities were at the hands of the occupation authorities. Several illegal excavations by antiquity dealers were done with impunity, whereas Palestinians working in Palestinian institutions were banned from carrying out any excavations or explorations back then,” Yassin said.

He pointed out the significant losses of Palestinian relics and archaeological sites during that time. There are no official and public reports or statistics to this effect, but according to Yassin, there have been about 1 million artifacts smuggled from Palestine to Israel and then abroad.

Since 1995, the PA has launched organized scientific excavations in the historical areas. Yassin noted that the ministry starts impromptu excavations to try and detect new locations upon sudden discoveries. The budget allocated to the Ministry of Tourism stands at about 20.9 million Israeli shekels ($5.7 million). However, there are no specific figures on the size of the budget for exploration and excavations, especially because donors usually fund them.

Yassin said that when new antiquities are found or seized from antiquity dealers during the excavations, the ministry runs preliminary tests to classify the pieces in the ministry’s national record; every piece has an identification card, with a serial number and detailed explanation.

He also spoke of the PA’s efforts to recover the relics that were smuggled but located abroad later.

“Efforts are ongoing to this effect despite the many challenges. We tried to recover some of the lost pieces, especially those that we were able to locate in different countries in the world. We did so through UNESCO, but since we are a state under occupation, things are very difficult for us,” Yassin said.

He added that some pieces can be found in the booklets and catalogs of famous museums around the world. The ministry is currently working on recovering them by contacting the parties that hold them through UNESCO.

According to Louay Abu Saud, an archaeology expert, the nonapplication of the law with regard to illegal excavations is what makes things worse. He told Al-Monitor, “The perfect solution would be to apply the law on thieves and smugglers. It is practically impossible to protect the Palestinian monuments in the absence of a strict application of a modern law that is commensurate with the magnitude of the crimes that are being committed at archaeological sites."

He noted that the applicable archaeological law in the area controlled by the PA is the Jordanian law of 1966, which does not serve as a deterrent and needs radical changes. He said, “It is imperative to issue a new modern law to impose strict penalties on illegal traders and excavations.”

Abu Saud said that Palestine is akin to a historical museum, given the successive civilizations that thrived in this part of the world, as it was ruled by the Assyrians, Persians, Greeks and Romans, who all left rare relics behind, some of which were discovered later.

He also stressed the seriousness of the antiquities thefts, calling upon the PA and the civil society institutions to start awareness campaigns in mosques during Friday sermons, at schools and universities, and on television, to reach the community and highlight the importance of the Palestinian archaeological sites and history.