The fight against the Islamic State in western Mosul has reached the level of door-to-door fighting, with many challenges and dangers regarding the safety of civilians and the use of chemical weapons by IS. 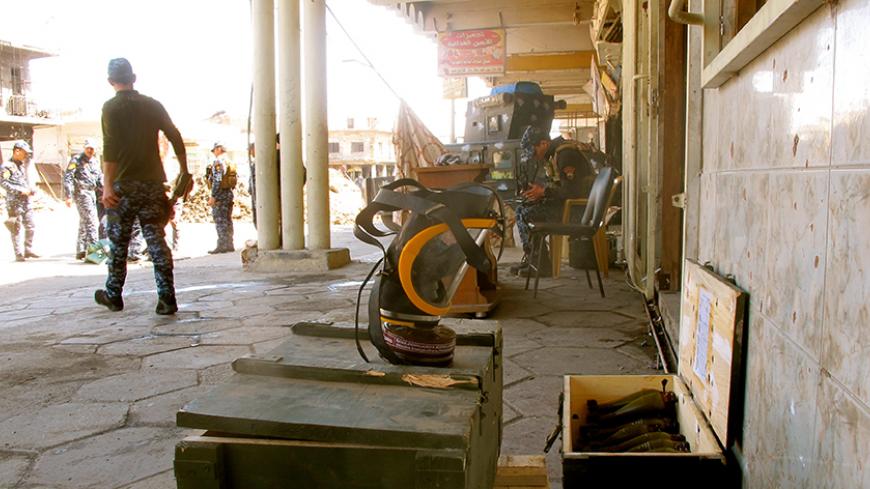 A gas mask sits atop ammunition boxes at a federal police front-line position against the Islamic State in the Old City of Mosul, Iraq, April 15, 2017. - Shelly Kittleson

MOSUL, Iraq — On April 23, a surprise attack including two suicide attacks by Islamic State (IS) fighters hit a command center for the Iraqi federal police in the south of Mosul. One Iraqi policemen was killed and one was injured.

On arriving at a federal police front line against the IS on April 15, gas masks were being unpacked, plastic wrappings torn off and the masks set atop wooden ammunition boxes for easy access.

After receiving elusive answers about why and seeing the same readying of masks at the nearby, heavily damaged Ninevah hospital, Al-Monitor found out later that day that an area under the control of the Iraqi special forces had been hit by IS mortars containing a chemical agent.

The hospital was taken a few weeks earlier. With its charred beds, abandoned stethoscopes and ubiquitous bullet casings, it is still in the range of IS sniper fire, and the stench of a bloated corpse of an IS fighter splayed out in a narrow alleyway nearby filled the air.

The masks were to protect the troops against a chemical attack that Iraqi forces had received information about, one federal police officer told Al-Monitor the following day as troops waited for orders to advance. Al-Monitor noticed a slight uptick in airstrikes.

As IS-held territory is shrinking and the fight has reached the narrow streets of Old Mosul, Iraqi forces have had to alter their tactics and the pace of the operation.

Federal police units are moving gradually to avoid heavy losses among their own forces and among civilians trapped in the city. Fewer airstrikes can be called in to help in the population-dense areas, and an abundance of snipers remain. The recent chemical attacks underscore the fact that although IS reserves have been drastically reduced, insidious dangers persist.

Informants still inside IS-held territory have intercepted communications between IS members, which has served to advance the fight, but slowly.

“Mostly we intercept IS requests for logistics help in certain areas,” said Lt. Col. Abbas Hawi from the 1st Division of the federal police’s 20th Brigade on a front line in the Old City. “But this time we got information of a planned chemical attack. We just didn’t know exactly where.”

Information on what exactly happened April 15 is still unclear.

A man who works regularly with the media team for the security forces, including the Iraqi Special Operations Forces (ISOF), which operates under the Iraqi Defense Ministry’s counterterrorism services, told Al-Monitor the following day that 35 fighters in the ISOF had been killed. An Arab journalist on the front line — correctly identifying to Al-Monitor the location of the attack prior to any official reports of it — said that he had overheard a request for more body bags via a walkie-talkie. None of these claims could be independently verified by Al-Monitor.

Hawi said that though the attack had not happened in his area, he had heard that most of the casualties were civilians.

An Iraqi Defense Ministry statement claimed that a small number of ISOF troops suffered minor injuries but that no deaths had resulted.

US and Australian advisers apparently were with the targeted unit at the time of the attack.

Some reports say that Iraqi forces have been pulling out of sections of west Mosul after some neighborhoods became “too dangerous to operate in due to the threat of chemical attacks from [IS] still holding ground within parts of the city.”

Lack of reliable, detailed information continues to be an issue in the war. The international media has at times been barred from the front lines. At other times, journalists have been allowed to stay on bases and embed with the various Iraqi forces for extended periods of time.

Following an incident in March in which a large number of civilians were reported killed by an apparent airstrike in West Mosul, airstrikes have been drastically reduced. An investigation is ongoing.

Though Al-Monitor noticed an increase in airstrikes the day following the April 15 chemical attack, the incessant bombing of IS-held territory seen a few weeks prior in a previous trip to the front no longer occurs.

Meanwhile, sniper fire is almost constant in many areas along the front line.

Hawi said that many IS snipers remain inside the Old City, and they have “perfect conditions” at the moment for shooting at the forces surrounding them. He showed Al-Monitor a map on the tablet computers all the officers at the front carry to call in coordinates for airstrike requests.

He added that IS was consistently putting civilians into the highest buildings it could find and then shooting at Iraqi forces from there, using them as “human shields,” but that the fighters would typically either kill themselves or “run when they see we have more people shooting than they do.”

“In a building in the Nabi Sheet neighborhood, for example,” he said, referring to an area where the tall former post and telecommunications headquarters is located, “we managed to save over 100 civilians that had been used as human shields.”

Al-Monitor visited this building in previous weeks, the day after one of the members of the elite federal police snipers brigade had been killed there by an IS bullet. On attempting to return the following day, Al-Monitor was stopped at a nearby street and forced to go back due to heavy sniper fire in the street leading to the building.

In the Old City on the current federal police front line, around five to seven corpses of dead IS fighters are still lying in the streets, Hawi noted, adding that typically Iraqi forces would dump earth over them to cover them but that they hadn’t had time or the means to do so yet with the ones still there.

One body was seen by Al-Monitor in a section of a wider road along which journalists and soldiers must run to limit exposure to sniper fire, and another was seen in a small alleyway virtually blocked off by the remnants of burned cars.

The difficulty in picking off IS fighters left inside without this leading to major civilian casualties has become all the more complicated within the narrow streets of the Old City.

Initial forecasts for a rapid taking of the last sections of IS’ “Iraqi capital” have been revised and none of the officers that Al-Monitor spoke with on the front line would give an estimate of how long they expect it to take to clear the entire city.