Israeli chefs get creative during Passover

Israeli chefs recount to Al-Monitor how Passover restrictions force them to become more innovative than ever before in their cooking and baking. 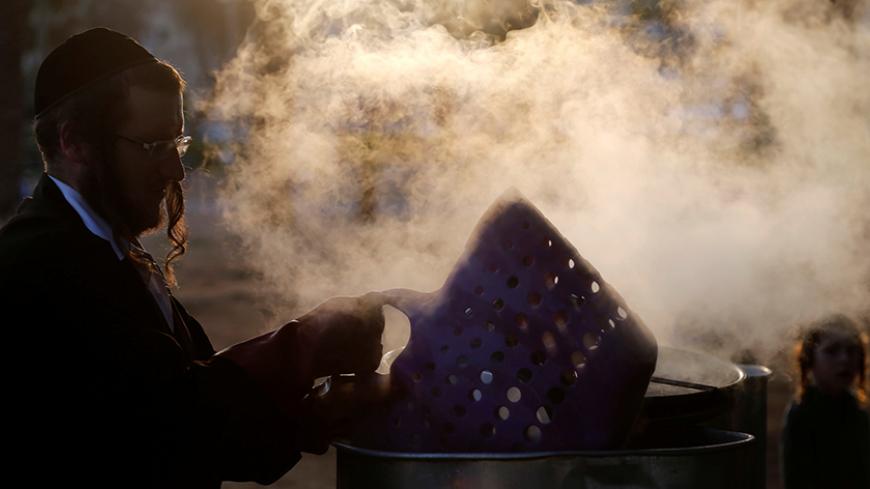 An ultra-Orthodox Jewish man dips cooking utensils in boiling water to remove any remnants of leaven in preparation for the Jewish holiday of Passover in the city of Ashdod, Israel, April 5, 2017. - REUTERS/Amir Cohen

The Passover festival celebrated by the Jewish people this week (which began the evening of April 10) involves dietary restrictions commemorating the exodus of the Israelites from Egypt that took place, according to Jewish tradition, in the 13th century B.C. According to the Torah, the Israelites fled Egypt so quickly that they could not wait for their dough to rise and ate unleavened bread instead (matzo). Thus, Jewish law prohibits the eating of “chametz” (leavened food) throughout the weeklong festival. Chametz is defined as flour made from wheat, barley, oats, spelt or rye that came into contact with water and rose as a result. Since wheat and barley flour are important ingredients in most cakes, many cooked foods and even drinks, the prohibition against chametz at Passover creates fascinating culinary challenges leading to remarkable and unique creativity.

“New things for Passover are being invented all the time, and this involves professional satisfaction and inventiveness that you don’t see the rest of the year,” said renowned Israeli confectioner Malki Adler. Adler, who is married and the mother of three, is a former accountant who abandoned that field in favor of her true love: baking. She describes an almost detective-like hunt for food combinations and raw materials to create substitutes for all types of foods that are forbidden at Passover. “My personal challenge is doubled,” she said. “Ashkenazi Jews [of European origin] do not eat Kitniyot at Passover. This means that we cannot prepare food products from flours made from humus, rice or corn flour."

But while the challenges for Ashkenazi Jews are almost insurmountable, for those whose custom is to eat legumes on Passover (mainly Sephardic and some Modern Orthodox and Progressive Jews), their creativity knows no limits.

The historic invention this year is kosher-for-Passover tahini bread. According to the buzz it made on social networks, it has become a historic hit of all times. “Today, people recognize my face because of the tahini bread; they stop me on the street. It’s become a real craze,” said Racheli Krut, the author of the popular blog Krutit. Krut claims that the recipe originated in Armenia, but that she changed and improved it. “It turns out that I succeeded in improving the tahini bread to the extent that people can’t stop eating it! My solution is excellent for traditional Jews on Passover. It’s also very much in demand by people who want to diet and those who have celiac disease.”

According to Krut, there is also great demand on Passover for dessert recipes that are parve (with neither milk nor meat). “Jews traditionally eat a lot of meat at Passover. Since the religious community does not eat meat and milky products together, they like Passover desserts that do not contain milk. If I’d have to bet on the next worldwide trend in Passover food, I think that coconut cream will take the day. It functions like cream in every way, its taste imitates that of milk and it is a relatively new product that opens new worlds of possible recipes. It has all the reasons to be a sure-fire hit.”

For Adler, who does not eat legumes on Passover, tahini bread is out of the question. She is limited to a much more restricted product list and said that she uses a mix of three types of flour: potato, almond and tapioca. “I’ve succeeded in making great things from this trio,” she said proudly. “This year, I publicized a series of recipes for desserts and cakes that look exactly like the real thing, and much tastier.”

Adler said that the big advantage of the Passover festival is that it forces people to use raw products that are more expensive than usual, but also healthier and of higher quality. “The use of almond flour, pistachio flour or whipped eggs is much more expensive than the ubiquitous chametz products we use during the year. For example, marzipan dough is hundreds of percentages more expensive than [regular] flour dough. But the results are always much better.”

The challenge that Adler is now grappling with is to create a crispy, high-quality dough for Passover. “This, for me, is the most complicated and difficult challenge of all. Now I’m working on margarine made from palm oil. I made it myself by boiling the oil under strictly controlled conditions,” she said. Adler checks the results of her experiment in the refrigerator. “It seems that, after a few days, the margarine is beginning to solidify,” she said, gratified.

Many people assume that the Passover-substitution industry is relegated to professionals and that there are few recipes that can be made by the average homebody. “It really does require a bit more expertise,” Adler admitted. “You have to use a thermometer, you need to be sensitive, more careful. But ultimately, anyone can do it.”

Adler said that Passover restrictions don’t frustrate her; in fact, the opposite is true. “There is something very special about knowing how to use available products, how to maximize them, bring them to the edge. I feel that there is a very educational lesson involved. That you can achieve everything you want, even if your resources are limited.”

Do bread substitutes really do their job? “Anyone addicted to bread will not give it up, not even for the best possible tahini bread,” said ultra-Orthodox confectionery chef Shalom Leeder. “I believe that the best substitute for bread on Passover is matzo. Today we have a broad variety of matzos, including rye and oat matzos. This sphere is also being upgraded and improved, slowly but surely. But with regard to Passover desserts and petit fours, the substitutes and combinations are the products of an amazing world of discovery and research.”