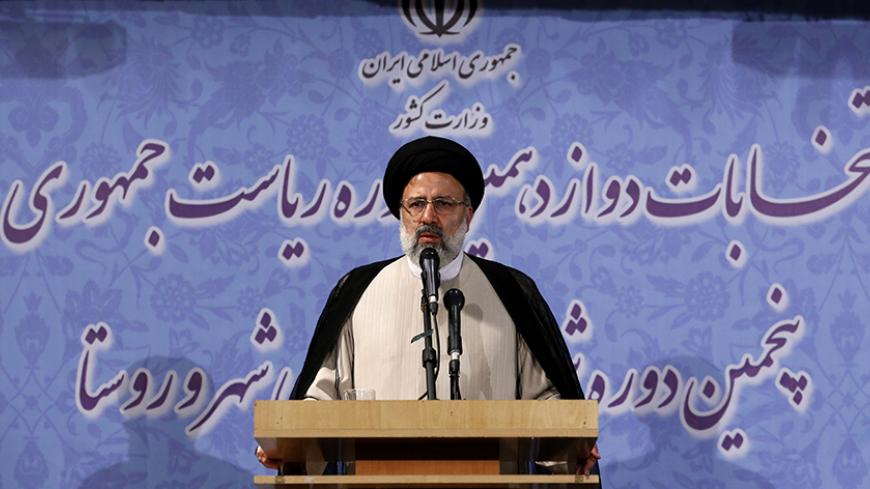 Ebrahim Raisi, an Iranian cleric and the head of the Imam Reza charitable foundation, delivers a speech after registering his candidacy for the upcoming presidential election in Tehran, April 14, 2017. - ATTA KENARE/AFP/Getty Images

With the presidential election due to be held on May 19, Iran's Supreme Leader Ayatollah Ali Khamenei has urged a high turnout in the race.

In a meeting with a group of army commanders and staff on April 19, Ayatollah Khamenei made reference to the upcoming presidential and city council polls, saying, "The election should be healthy, safe, lucid and massive.” He continued, "If this is achieved — which God willing it will happen by His grace, despite how the enemies and the mainstream media try to spoil the results of the election, in some way or another — if the Iranian nation continues to take part in the election with vigilance and awareness, as they always have, then a massive, lucid election, coupled with enthusiasm and eagerness, as well as health and safety will be held, and this will be a significant resource for the country, which will safeguard it."

Meanwhile,conservative Ebrahim Raisi, who is believed to be the main candidate of the Principlist camp, has written two open letters to moderate President Hassan Rouhani and the conservative head of Iran's state TV, Ali Askari. In his letter to Askari on April 18, Raisi criticized the state broadcaster’s coverage of Rouhani’s speeches, arguing that the incumbent is also a presidential candidate and state TV must thus stop airing "biased advertisements" in his favor.

Asking for the observation of the "moral code," Raisi addressed Rouhani, saying, "It is a pity that the competition for serving [the people] is contaminated by the suspicious advertisements [on state TV]."

While Raisi is expressing anger over the coverage of Rouhani's speeches, moderates and Reformists have long slammed state TV for excessively reporting on Raisi.

The state broadcaster, which is controlled by conservatives, has indeed over the past years been censured by the moderates and Reformists for its approach to the Rouhani administration. The criticisms of its "biased coverage" of the government’s achievements heightened particularly when Iran reached a nuclear deal with six world powers in 2015, as the broadcaster was charged with trying to belittle the agreement in the eyes of Iranians, as conservatives knew that Rouhani would use it as a trump card in the May 19 presidential election.

On April 19, Etemaad daily wrote that, while Raisi is accusing the state broadcaster of unfair advertisement by covering the president's daily agenda, it has been showing Raisi as the prayer leader on TV following the daily televised call to prayers.

According to the Reformist daily, state TV has rather been ignoring Rouhani and his achievements, arguing that the proof of this "unfair" coverage is the broadcaster not giving live coverage to the president's key speech on the "Resistance Economy and rural developments" on April 8.

Moreover, the Reformist Hamdeli newspaper argued April 19 that since Raisi has good relations with the conservative managers of the state broadcaster, he could have directly brought up his grievances in private. As such, Hamdeli claims that the penning of open letters indicates that the move is just a ploy by his campaign to portray Raisi as an "oppressed" candidate who is facing injustice.

Presidential candidates have always pursued the tactic of showing themselves as victims of injustice, in the belief that emotional sentiments in their favor will be stirred among voters.

For instance, Tehran Mayor Mohammad Bagher Ghalibaf, a conservative presidential candidate, seemingly used this approach to attract more votes in the 2005 presidential election, which led to hard-line Mahmoud Ahmadinejad's victory. Back then, Ghalibaf famously shed tears in a live TV show after seeing a picture of his brother, who was killed in the 1980-88 Iran-Iraq War.