Eyes turn to Gul as countdown begins to Turkish referendum

Turkey's former President Abdullah Gul has come under fire for refusing to speak at a rally for President Recep Tayyip Erdogan, unnerving Erdogan's loyalists as the referendum approaches. 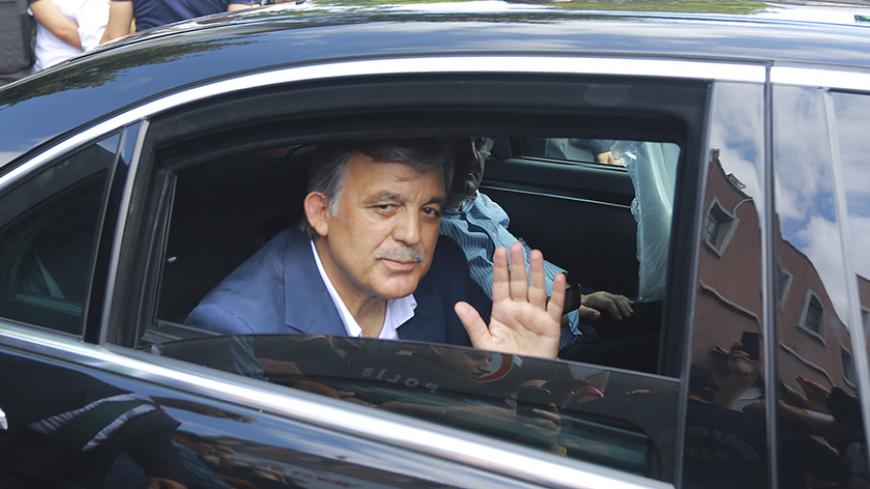 Former Turkish President Abdullah Gul waves from a car as he leaves a memorial service for the victims of the thwarted coup in Istanbul, July 17, 2016. - REUTERS/Kemal Aslan

With less than two weeks left before a critical referendum on switching Turkey’s parliamentary system to a presidential one, the gloves are coming off and a former president is being dragged into the ring. Abdullah Gul, a founding member of the ruling Justice and Development Party (AKP) who stepped down as president in 2014 after serving a single seven-year term, has come under fire for refusing to speak up in favor of the measure that would concentrate power in his successor Recep Tayyip Erdogan’s hands.

The controversy erupted when Gul declined to take part in an April 1 campaign rally in his native Kayseri, where Erdogan was due to speak. Erdogan decided not to go either, leaving Prime Minister Binali Yildirim to address the crowd. Gul cited his decision not to participate in any political events as the reason for his absence, but Erdogan’s allies were not satisfied. “The 'no' voter failed to surprise,” noted Duvardibi TV, a news portal whose main purpose seems to be to discredit Erdogan’s enemies, perceived or real.

Devlet Bahceli, the leader of the far-right Nationalist Action Party who is backing Erdogan, joined the chorus of rebukes. He suggested that Gul had displayed ingratitude to his former boss. When Gul campaigned to become president in 2007, Erdogan had joined him in Kayseri. Gul should have returned the favor and gone to Kayseri to support Erdogan, Bahceli observed.

Not everyone agreed. “Abdullah Gul is a prestigious figure who led Turkey when it was closest to democracy. Full stop!” tweeted Asli Aydintasbas, a prominent Turkish columnist and fellow at the European Center for Reform.

As two-term foreign minister, Gul was seen as the driving force behind Turkey’s bid to join the European Union and the architect of many of the democratic reforms that prompted the EU to open full membership talks with Ankara in 2005. Gul is also widely credited with being a moderating influence over Erdogan when the latter was prime minister. His consensus-seeking style drew a sharp contrast with Erdogan’s street brawling machismo, but together they formed a winning team.

The accepted wisdom is that Gul’s departure from politics allowed Erdogan to indulge his worst instincts and Turkey has paid a heavy price. By the same logic, Gul’s return could prove to be Turkey’s salvation, as many hoped he would take over as prime minister and chairman of the AKP when Erdogan became president. But scenting a threat to his authority, Erdogan saw to it that he was pushed aside, and Gul did not put up a fight. The steely determination that drove Gul to break ranks with the founder of Turkey’s Islamist movement, Necmettin Erbakan, in 1998 and to steer fellow moderates toward the soon-to-be-formed AKP appeared to have deserted him.

When Erdogan began cracking down on opponents in the wake of the Gezi Park protests that engulfed the country in 2013, Gul made little effort to stop him. And in 2014, Gul found himself signing a draconian law that allowed authorities to effectively censor the internet without judicial review.

Gul’s silence — some call it complicity — was attributed to fears of provoking Erdogan and risking his plans to switch jobs with him. Whatever the reasons, Gul has said little about the steady reversal of all the reforms he so lovingly put into place. The growing consensus is that Gul has become irrelevant.

But Erdogan clearly does not think so. Why else would he seek his support? And why do pro-Erdogan commentators relentlessly attack him with such outlandish claims as Gul being in league with Fethullah Gulen, the Pennsylvania-based imam blamed for helping orchestrate the failed July coup? Gul is one of the few figures the AKP base would likely gravitate toward should Erdogan lose his iron grip.

A split seems unlikely, but there is growing worry within the AKP ranks over Erdogan’s increasingly authoritarian turn. Perhaps more critically, there is frustration over a perceived unfair division of spoils, with Erdogan’s tight circle of fellow Black Sea natives allegedly benefitting the most.

Gerald MacLean, a British academic who wrote a recent biography on Gul, noted that the former president is a patient man and people from Kayseri are renowned for their wiles. Gul may well be playing the long game. And as the Turkish adage goes, “The dervish who is patient attains his goal.”