The longtime struggle by human rights groups to stop torture at the hands of the Egyptian security services shows no signs of improvement. 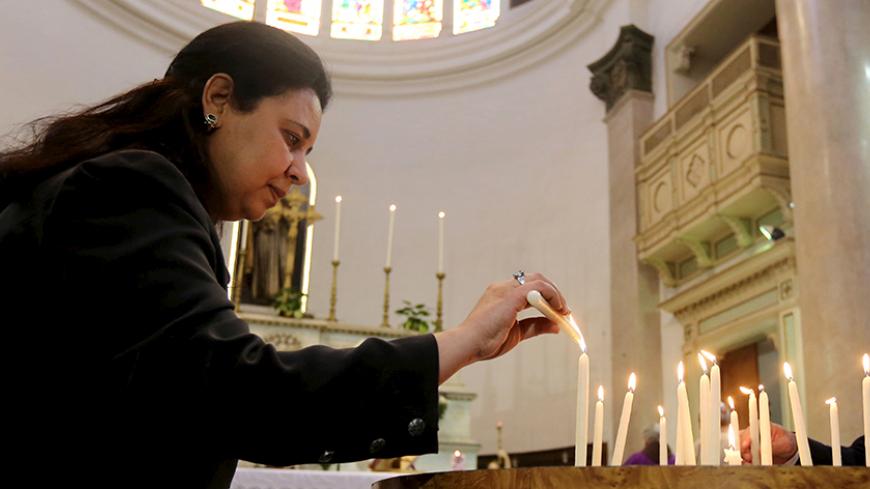 A woman lights a candle at St. Joseph's Roman Catholic Church in Cairo on March 5, 2016, in memory of Italian doctoral student Giulio Regeni, who was tortured and killed in Egypt earlier that year. - REUTERS/Mohamed Abd El Ghany

In 2014, a young Egyptian man in his early 20s was to be wed in a few hours. Celebrating, he rented a scooter with his friends, driving around and cheering in joy. They were stopped at a checkpoint, and, upon finding out that the groom did not have a license for the scooter, the police officer moved to confiscate the scooter. When the young man begged to keep it, the officer and his informants whaled on him, beating him to death.

“Imagine going out to celebrate getting married, and returning a corpse,” said lawyer and head of United Group for Law Negad El Borai, who spoke about one of the 150 cases of torture he has handled over two years. Borai decided to take a stance, but what started as a draft law to end torture ended up in his own prosecution and with two judges being investigated in the first official session April 24.

“We first used to provide legal aid to torture victims, but we found out that these cases lead nowhere,” Borai said. More than 80 complaints against the prosecution’s deliberate sluggishness were handed to the general prosecutor. The lawyer explained that such cases need quick investigation before torture marks are gone. Yet again, no action was taken against the common practice.

Several victims spoke to Al-Monitor about the torture they have survived, be it in police stations or at the hands of national security. Upon arrest, the detainee receives a “reception party” — usually involving beating, slapping and kicking. Verbal abuse is an integral part of the forces’ language. Humiliation is accompanied by psychological torment through death threats, threats to the victim’s family or witnessing the torture of other victims. Urgent medical attention is a rarity, and hordes of detainees are placed in small, filthy rooms.

During interrogation, electrodes are connected to genitals, bones are broken and ice-cold water is used. A trademark method of Egyptian torture is officers extinguishing cigarettes on prisoners’ bodies. Confessing to trumped-up charges may save a person from rape. Homicide and out-of-control torture have led to the death of 50 citizens across Cairo and Giza in 2015, and this is only the official number. Solitary confinement for months on end has been used against human rights lawyer Malek Adly, activist Ahmed Douma and many others.

"It felt like time stood still. It just wouldn't move,” said Noor Khalil, 24, recalling his torture sessions. "I kept thinking how our lives are so cheap to them.”

The legal stagnancy sparked the idea of an anti-torture law. In November 2014, professionals from all related bodies — including Ragia Omran from the National Human Rights Council, professor of criminal law Emad al-Fikki and Ihab Sallam from the United Nations — put together the draft.

Needing a review from the judiciary’s perspective, Judge Hesham Raoof — who previously held the position of assistant minister of justice — and Judge Assem Abdel Gabbar — vice president of a criminal circuit — were consulted, giving their input and amendments. Al-Monitor got hold of the bill.

The draft stipulates that the district attorney should promptly and as soon as he is informed of a torture incident give orders to begin the investigation (Article 122). Any governmental officer who ordered or permitted the torture of an individual is to be penalized with rigorous imprisonment (Article 126). The compensation to be paid to the victims or their successors shall not be less than 250,000 Egyptian pounds (Article V), and an official, permanent government board for the prevention of torture shall be constituted by a resolution from the prime minister (Article IX).

To finalize the law, the draft was sent to President Abdel Fattah al-Sisi and the Supreme Judicial Council in April, only for the council’s president to file a complaint against the two judges. They were accused of “the participation in drafting a law against torture with an illegal group headed by Negad El Borai." Minister of Justice Ahmed El-Zend ordered their referral to the disciplinary board for investigation. Borai was also interrogated and charged with harming the public security, disruption of state institutions and receiving foreign funds, among other charges.

“I find this a subliminal message that the government does not want to face and combat torture,” Borai stated. It's a negative message that would give protection to torturers, he said.

Attempts to shut down Al Nadeem Center for Rehabilitation of Victims of Violence and Torture, which has stood against torture and deaths in detention since 1993, began in 2004. Later, in 2016, the decades-old center received a Health Ministry order for closure over “violation of license and changing activity.”

“This is absurd; we have been conducting the same activities for years. One of the main problems [with the regime] is posting on our Facebook page about torture and the Interior Ministry’s abuses,” said Al Nadeem’s director, Magda Adly.