US Secretary of State Rex Tillerson is set to meet with Turkish President Recep Tayyip Erdogan in a visit to Ankara later this month, as tensions between their two countries persist over US support for Kurdish-dominated groups in Syria. 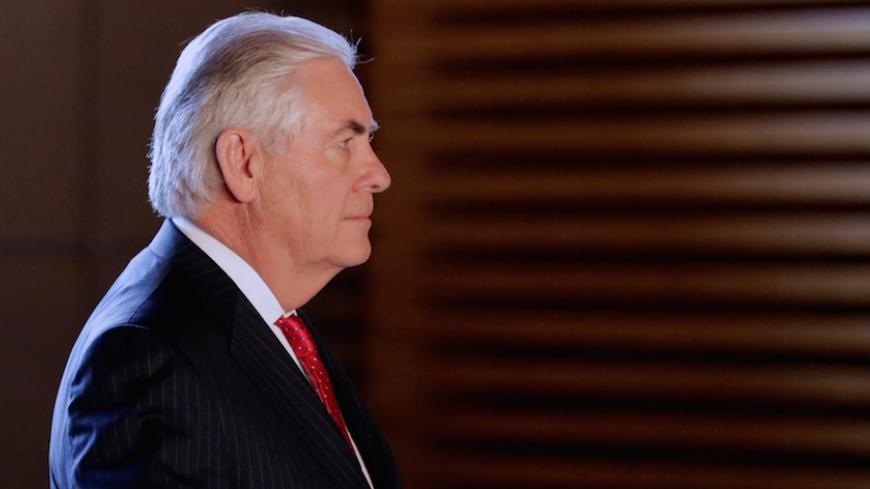 US Secretary of State Rex Tillerson walks to meet Japanese Prime Minister Shinzo Abe, prior to their talk at the prime minister's office in Tokyo, March 16, 2017. - REUTERS/Eugene Hoshiko

Al-Monitor has learned that US Secretary of State Rex Tillerson is expected to travel to Turkey March 30. He will be the most senior US official to formally visit Turkey since the Donald Trump administration took office in January.

A senior Turkish official who spoke on the condition of anonymity confirmed that Tillerson was expected to meet with Turkish President Recep Tayyip Erdogan and Foreign Minister Mevlut Cavusoglu, among others. The official was unaware of Tillerson’s full itinerary but said it would not be unusual for the secretary to visit other countries in the region as well. The official declined to elaborate any further.

In an emailed response to Al-Monitor’s request for comment, the State Department said it had “nothing to announce on [the] Secretary['s] travel.”

Tillerson’s visit comes amid long-standing tensions between Washington and Ankara over US plans to pursue its alliance with the Syrian Democratic Forces (SDF) against the Islamic State (IS). The SDF's Arab component is growing by the day, but nonetheless remains dominated by the Syrian Kurdish People’s Protection Units (YPG).

Turkey wants the United States to scrap its ties with the YPG, arguing that the group is linked to the Kurdistan Workers Party (PKK), which is on the State Department’s list of terrorist organizations and is fighting a bloody insurgency inside Turkey. The United States, however, clings to the fiction that the YPG and PKK are separate entities. All signs indicate that Washington will stick with the SDF, which has proven to be the most robust local force on the ground in the fight against IS, as it prepares for the capture of Raqqa, the jihadis’ “capital."

In the meantime, Washington is scrambling to keep Turkey on an even keel. With a 559-mile border with Syria, Turkey remains a critical if increasingly troublesome ally for the United States regionwide. In efforts to massage Turkish feelings, CIA Director Mike Pompeo visited Ankara in February, and Chairman of the Joint Chiefs of Staff Joseph F. Dunford met with Turkish Chief of the General Staff Hulusi Akar in the resort city of Antalya earlier this month.

The Incirlik Air Base, in Adana, remains the main logistical hub for anti-IS operations, and while Turkey’s military effectiveness in Syria has proven to be limited, it has displayed an infinite capacity to be disruptive. Its persistent shelling of YPG positions in Afrin and more recent attacks against the group near the SDF-controlled town of Manbij are taking their toll. “When we carry out the final assault on Raqqa, how can we be sure that Turkish forces won’t be chasing us from behind,” asked a senior YPG commander contacted in northeastern Syria via WhatsApp.

On March 7, Turkey dealt a blow to humanitarian aid efforts in Syria by ordering Oregon-based Mercy Corps to shut down operations it runs out of Turkey. Ankara’s official reason is that the group, which is among the biggest dispensers of aid in Syria, had failed to complete formal paperwork. More likely it was because the Turkish government is opposed to aid groups like Mercy Corps delivering aid to or through areas controlled by the Syrian Kurds.

At the same time, Turkey, which alongside Albania is a predominantly Muslim NATO ally, is putting on a big show of growing closer to Russia. It is currently in discussions with the Russians to buy S-400 long-range missile systems. James F. Jeffrey, a former US ambassador to Turkey and a senior fellow at the Washington Institute for Near East Policy, observed, “Doing so would leave people in America and Europe with the strong belief that Erdogan has thrown in his lot definitively with Russia and end efforts by Trump to cooperate with Turkey.” It would be “felaket,” he told Al-Monitor using the Turkish word for “disaster.”

Yet, the Russians also support the YPG and are keeping Turkish forces and their rebel allies within a tightly delineated area in Syria. Turkish forces and Free Syrian Army fighters operating under the Operation Euphrates Shield command currently control more than 772 square miles captured from IS since August 2016. They are hemmed in to the east, however, by Russian, Syrian regime and US Special Operations Forces, which are effectively preventing them from acting on repeated threats to pursue the YPG in Manbij.

Turkish Defense Minister Fikri Isik struck a more conciliatory tone today, saying that finding “a diplomatic solution” with the United States and Russia for ending the YPG presence in Manbij was “necessary.” His comments reflect a general softening in Turkey’s anti-American rhetoric, which grew increasingly shrill in the last days of the Barack Obama administration.

Howard Eissenstat, a Turkey expert at St. Lawrence University in upstate New York, remarked, “With Trump, Erdogan’s been altogether more cautious.” Eissenstat told Al-Monitor that this is because Erdogan “still holds out some hope for cooperation on Syria, but also perhaps because he is unsure what the cost might be. Trump might hold a grudge.”

The caution is obviously mutual. The United States has hardly uttered a word as Turkey continues to lock up tens of thousands of people accused of involvement in the failed July 15 coup. It has also not commented on the increasingly desperate plight of Turkey’s Kurds, many of whom are fighting under the YPG banner against IS.

Nicholas Heras, a senior fellow at the Center for a New American Security, thinks that in a bid to placate Turkey, the United States could offer it “an opportunity to work out post-IS security and governance for Raqqa, similar to the project Turkey is engaged in to have influence over the post-IS governance in Mosul.”

Heras told Al-Monitor that all such options would, however, hinge on Turkey accepting “the reality that the US military will not totally abandon the SDF, which was made by America and has demonstrated its effectiveness against IS.”