Turkey’s construction boom: A blessing or a curse?

The Turkish construction sector’s contribution to the local economy has almost caught up with that of the manufacturing industry, but this is hardly a reason to celebrate. 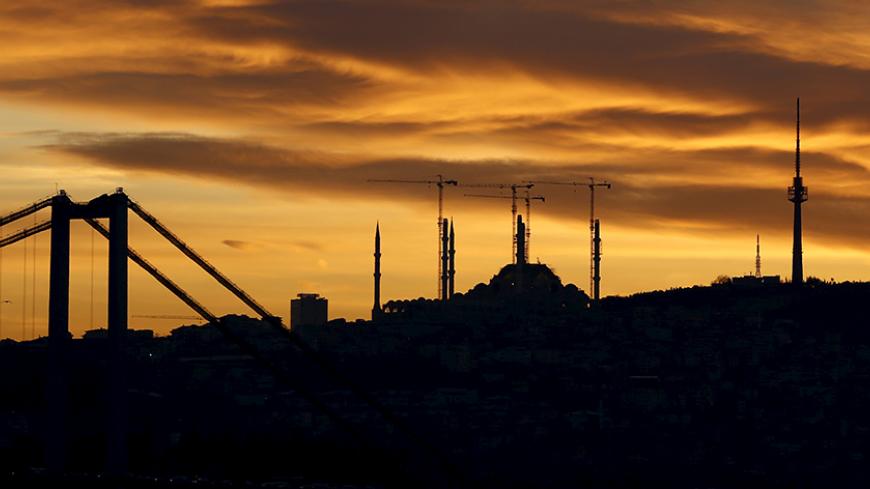 The sun rises behind the Bosporus Bridge and the construction site of the new Camlica Mosque in Istanbul, Feb. 3, 2016. - REUTERS/Murad Sezer

Concerned over deepening financial woes, Turkey’s Central Bank held a closed-door internal workshop Feb. 20 to discuss the real sector’s foreign currency debt and related risks, Al-Monitor has learned. A document presented at the workshop and made available to Al-Monitor by a senior bureaucrat who attended the gathering underscores that “the exchange rate risk of real sector companies is significant and the natural and financial safeguards against this risk are limited.” According to the document, the real sector’s debt stock has reached $347 billion, or about 50% of gross domestic product (GDP).

One of the Turkish economy’s structural realities is that private companies have limited equity capital, relying heavily on domestic and external loans to roll over their operations. The Central Bank notes that $208 billion, or 60%, of the debt burden of real sector companies stems from foreign currency loans. This is a vital problem, given the Turkish lira’s dramatic depreciation against the dollar over the past several months. The debt burden of the companies has become heftier because the dollar is now much more expensive.

A striking detail in the data is that the companies’ foreign currency debt has multiplied in less than a decade. In 2009, their net foreign exchange deficit stood at only $70 billion, increasing 197% to reach the current $208 billion figure. Why the companies were not cautioned while taking such big risks remains a mystery.

The Central Bank draws attention also to the sectoral breakdown of companies indebted in foreign currency, noting that only 26% of the debt belongs to the manufacturing industry, which has the potential to export goods and thus earn foreign exchange. Meanwhile, the share of the construction sector and its complementary sector — the real estate business — has reached 20%. Obviously, the construction and real estate sectors have a limited foreign exchange earning capacity. While their spending on imported inputs such as machines and construction materials has increased, real estate sales to foreigners remain at about $2 billion to $3 billion per year. Hence, construction and real estate, along with energy, are the main sectors exacerbating Turkey’s current account deficit.

That the ruling Justice and Development (AKP) has purposefully pursued a construction-centered economic growth is no secret. The construction craze in Turkey could have not escaped the eye of any visitor to the country in recent years. Istanbul, in particular, has seen scores of housing complexes and business plazas springing up, in addition to infrastructure projects such as roads, tunnels and bridges — often at the expense of the city’s urban aesthetics, historic fabric and cultural heritage.

The government’s housing development agency, TOKI, has actively stimulated the boom by providing public land for new projects, while a significant portion of external and domestic loans have been granted to construction companies, in addition to “housing loans” made available to consumers. According to the Turkish Banks Union, housing loans accounted for 10% of all bank loans at the end of 2016, and close to 12% went to construction companies. So, in total, the construction sector benefited from about 22% of the loans, outstripping the manufacturing industry, whose share stood at 19%.

And while the manufacturing industry was earning almost all of the foreign exchange that Turkey acquires through exports, the construction sector grew into a major contributor to the country’s foreign exchange deficit, or current account deficit, which has at times reached 5-6% of GDP. Although the trend was plain as day, the AKP government continued to favor construction as the engine of the economy, which ultimately led to the sector's catching up with the manufacturing industry in terms of contribution to the GDP.

According to official figures, the manufacturing industry contributed 16.7% of GDP in 2015, down from 17.1% in 2003, the AKP’s first full year in power. The construction and real estate sectors, meanwhile, accounted for about 15.8% of GDP in 2015, up from 12.5% in 2003. In other words, the manufacturing industry has failed to even preserve its share of GDP under the AKP, let alone increase it, while construction and real estate have increased their share by 3.3 percentage points, coming almost on par with a sector that has been the traditional backbone of the economy.

However, construction caters to the domestic market, contributing little in terms of foreign exchange earnings. Moreover, the construction boom has drawn valuable resources from industrial sectors, especially in Istanbul, the country’s industrial hub, while at the same time deepening regional disparities. And now, with the country's growing foreign exchange problems, this seems to have drawn the AKP into a financial pit.

The construction boom has been driven by housing projects and also by the so-called megaprojects — big-scale infrastructure investments such as airports, bridges, motorways and hospital complexes, built in partnership with local and foreign companies, which have been granted loan and turnover guarantees by the Treasury. Those ambitious investments, too, have dragged the economy down by spending but not generating foreign exchange. The Central Bank has noted that companies involved in those projects have the biggest foreign exchange deficits.

For years, the AKP’s construction drive enjoyed favorable economic conditions, both locally and globally, marked by abundant inflows of foreign capital and a cheap dollar. The impressive projects, the new jobs created for both skilled and unskilled labor and the consumer’s easy access to loans translated into popular support for the AKP and helped it win consecutive elections. Additionally, the AKP was able to achieve — to some extent — its goal of creating its own bourgeoisie, which is today a community rooted in construction. The building sector was rather convenient in this regard, for it relies heavily on government decision-making, both on the local and central level. Holding a firm grip on procedures such as zoning permits, building licenses, land allocation and the selection of companies in public tenders, the AKP consciously used construction as leverage to achieve its goals.

It should be noted that the construction drive rested on some objective necessities. In the 2000s, a significant housing and infrastructure deficit had emerged in urban areas after millions of migrants flocked in from rural areas. The bulk of the urban housing stock was old and substandard, and thus, the need for new construction was very real.

Yet while directing Turkey’s limited resources to the construction sector, the AKP overlooked the industry and its ability to earn foreign exchange through exports, committing its biggest blunder. It was in fact a conscious choice, motivated by political goals. And for some time, it did produce the intended results — but not without a price. The ultimate cost for Turkey today is a foreign exchange bottleneck and a hefty debt burden. The AKP is struggling to find a way out, but what has emerged so far is only a portion of the actual cost.