Companies involved in Turkey’s “megaprojects” have incurred some of the worst damage that the slump of the Turkish lira caused on foreign loan liabilities in the private sector. 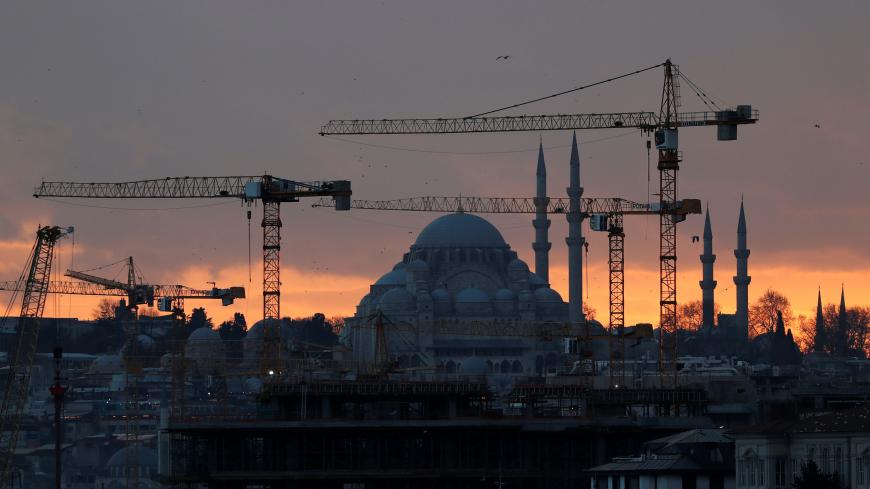 The sun sets behind the cranes of Galata Port construction site and a mosque in Istanbul, Turkey, Jan. 23, 2020. - REUTERS/Murad Sezer

Saddled with two-thirds of the country’s external debt stock, the Turkish private sector is going through a rough patch amid the slump of the Turkish lira, which has badly exacerbated foreign loan liabilities. Nonfinancial or real sector companies, in particular, are losing sleep each time foreign exchange prices go up, as they hold 36% of Turkey’s external debt, which totaled $434 billion in 2019.

For companies indebted in hard currency, the uptick in exchange rates means they need to put larger sums in liras aside to repay their loans, which, in turn, means accumulating foreign exchange losses. In its first inflation report for the year, the central bank outlines the scale of the corporate ordeal, based on a study of the balance sheets of about 300,000 companies. Accordingly, foreign exchange losses have come to account for up to 14% of the costs of companies in recent years. Beyond this average figure, the ratio reaches up to 30% in some sectors and companies.

The report indicates that companies involved in big infrastructure projects such as airports, bridges, motorways and hospital complexes — built as public-private partnerships and touted as “megaprojects” by the ruling Justice and Development Party (AKP) — stand out among those with the most ravaging foreign exchange losses. The damage is of concern to taxpayers, too, since the financing of the projects has been guaranteed by the treasury. How financing risks were calculated and why the calculations went awry is an issue that deserves separate questioning and analysis, but what is already clear is that the country is faced with a hefty bill.

How the borrowing spree came to this point is equally important to diagnose.

In the 1980s, a period marked by the premiership of Turgut Ozal, the architect of Turkey’s neoliberal shift, Ankara reckoned that relying on domestic savings alone would not generate the desired economic growth. To facilitate the use of foreign funds, it moved to dismantle legal barriers to capital movements, including a landmark revision of the foreign exchange regime in 1989. Turkey at the time had a gross domestic product of $147 billion, a far cry from roughly $750 billion at present, and its bonds with the global economy were still weak. Increasing the inflow of foreign capital, Ankara hoped, would accelerate the integration. Turkey’s external debt stock stood at only $44 billion in 1989, roughly a tenth of what it is today. The government was the principal borrower from foreign lenders, which were mainly international bodies such as the World Bank and the International Monetary Fund (IMF) rather than the financial markets.

Despite the liberalized regulations, Turkey struggled to attract the funds it was hoping for, as foreign financiers saw deterring risks in the country, including annual inflation of up to 70%, bulky public deficits and political instability.

Finally, a big economic turmoil in 2001 was followed by IMF-sponsored recovery measures, as a result of which Turkey became a lendable country in the eyes of foreign investors. And in those sunny days, the AKP had its lucky break, coming to power in November 2002. The year 2003 marked the beginning of an extensive inflow of foreign funds, thanks to which foreign exchange rates remained virtually fixed for years. The price of the dollar averaged 1.6 liras in the nine years to 2011, emboldening private companies to borrow more from abroad and step up imports.

The economic tailwinds that the inflow of foreign money created were instrumental in the AKP’s consecutive election victories, and the government did little to restrain the borrowing spree, even though it was reaching extraordinary levels. The government’s own need to borrow from abroad largely receded as it stuck to budget discipline and repaid its debt to the IMF, an achievement that became a key bragging point in the AKP’s election campaigns.

Ultimately, private banks and companies became the main debtors of foreign lenders, owing two-thirds of Turkey’s external debt stock, which had reached $465 billion by early 2018. Companies alone were saddled with $158 billion in external debt, a mammoth increase from $2.5 billion in 1989.

How the borrowed hard currency was used is equally important. Corporate financial strains and Turkey’s vulnerability to exchange rates would have been much lesser today if the loans had financed investments in sectors capable of generating hard-currency revenues through exports such as the manufacturing industry. Yet most of the borrowed monies went to luxury construction projects, which promised quick profits, and other, import-reliant sectors. The companies also used the loans to buy public assets that Ankara privatized and to finance the construction of the “megaprojects,” which boomed after 2011.

The AKP’s biggest blunder was its apparent belief that the flow of foreign funds would never recede and continue to help economic growth, which, in turn, would ensure that Turkey retained its appeal to foreign financiers, who would eventually help cover the growing current account deficits. Yet the global economic climate changed in a way that reduced investor appetite in emerging economies, and Turkey largely lost its status as a lendable country amid economic fragilities as well as political and diplomatic setbacks, decoupling markedly from other emerging economies in terms of risk. As a result, the lira tumbled, and the price of the dollar increased an average of 21% per year in the period from 2015 to 2019, climbing from about 2 to 6 liras.

Companies indebted in hard currency, especially those without hard-currency earnings, struggled to cope with the new realities, accumulating big foreign exchange losses. According to the central bank report, most of those troubled companies are the ones that undertook the “megaprojects.” The report says, “The sectors with the highest foreign exchange losses ratios are the services, energy and construction sectors, respectively. These sectors played an active role in many projects such as renewable electricity generation, electricity distribution, highway/bridge, city hospitals and airport projects in which both domestic and international foreign currency loans are used extensively. In addition, the intensive use of imported inputs in some sectors such as the energy sector is believed to have been effective in the rise of exchange rate losses.”

What is more, most of the debt-stricken “megaproject” builders are companies with close bonds to the AKP government, which has offered treasury guarantees to $17.2 billion loans they have used. Hence, keeping those companies afloat is one of the reasons why Ankara has been scrambling to suppress hard currency prices through unconventional means, while continuing to grant them favors in various forms. The government’s ammunition, however, appears to be running out, foreshadowing even more intriguing developments down the road.