Palestinian President Mahmoud Abbas is using Palestinian Yacoub Shaheen's win on "Arab Idol" as an opportunity to alter Palestinians' image in the world. 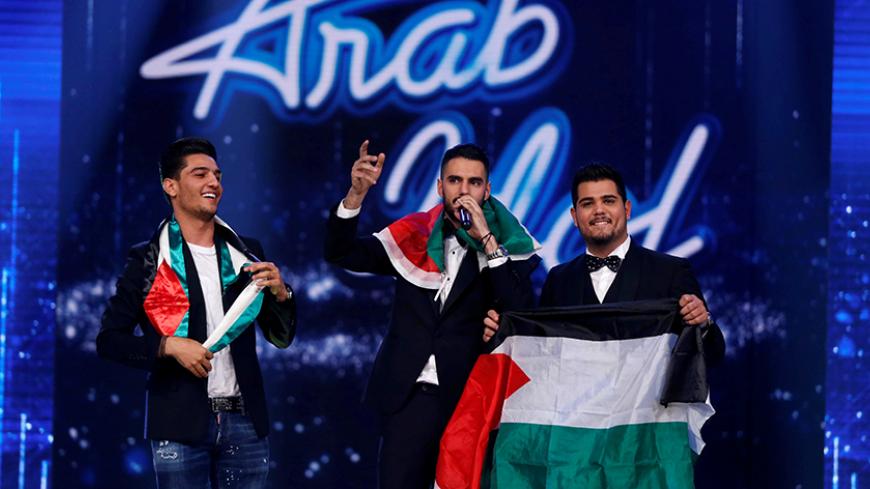 The presence of Palestinian President Mahmoud Abbas in Beirut the weekend of Feb. 25 may have been a coincidence. But when two Palestinians are competing in the final week for the title of Arab Idol, a Palestinian president is unlikely to let the incident go by without being part of the fanfare.

Abbas didn't attend the "Arab Idol" finale filmed in Lebanon, in which Shaheen won the pan-Arab title, but in the front row of the auditorium cheering on the Palestinian contestants were Abbas' son Yaser; the mayor of Bethlehem, Vera Baboun; the director general of Palestine TV, Ahmad Assaf; and businessman Munib al-Masri.

In images shown during that last episode, Abbas is seen conversing with the contestants, telling them he has been following the TV musical contest program for some time.

This year, "Arab Idol" is in its fourth season and already two Palestinians have won the prestigious title. This year's win carries with it a $50,000 cash prize, a recording contract with Platinum Records and a spot on the "Stars on Board" tour with a number of Arab stars. Mohammed Assaf from Gaza, who won the second season of "Arab Idol" in 2013, was a guest singer on the Feb. 24 finale.

The finale of "Arab Idol" featured a live feed from Bethlehem's Nativity Square and from the Galilee village of Majd al-Krum, as Palestinians gathered to watch the show on huge screens. Thousands of cheering youth can be seen celebrating and waving Palestinian flags.

Riding on the coattails of stardom is not new nor is it unique to Palestinians. The success of the Bethlehem native has helped remind people of the Palestinian cause. The success of a Palestinian in a pan-Arab music contest helps show Palestine and Palestinians in a positive story that has no violence or anti-Israeli sentiment.

The emphasis on music and art is why Abbas had no problem endorsing the show and the contestants. The fact that a Palestinian won "Arab Idol" this year is a testament to Shaheen's skill and also to the humanity of Palestinians, who are almost always caricatured as bloodthirsty terrorists.

This success notwithstanding, the public endorsement of Abbas in the middle of the music show caused him some hardship. Abbas was accused of turning a favorable eye to a celebrity while ignoring suffering Palestinians. When Abbas told Ahlam that he is an avid follower of the program, Abbas' critics launched a hashtag on social media calling on the president to follow them. One hashtag reminded the president that he has not set foot in Gaza for more than a decade.

The success of Shaheen, a Palestinian Christian from the Syriac denomination, in the Arab world’s top music program is also seen as helpful in distancing Palestinians from the label of terrorism.

The Palestinian victory produced generally positive reactions. Jihad Abu Falah, a TV producer in London, told Al-Monitor that the Palestinian success on "Arab Idol" has two faces. "On the one hand, it showed Palestinians in a new way, different from the typical stereotype that only produces anger or tears," he said. "It showed Palestinians loving life and not [as] religiously intolerant."

However, Abu Falah, who works for al-Hiwar TV, believes that MBC used Palestinians to play on people’s emotions and bring in more viewers and more money. "They knew the soft spot of Palestine in most Arab minds, and they exploited it for financial gain and larger audiences," he said.

Moheeb Barghotiuy, the culture editor of al-Hayat al-Jadida in Ramallah, feels that "Arab Idol" expanded the Palestinian geography on air. "For the first time, Arabs were able to hear a Palestinian musician born in Israel, even though he now lives in the US," he told Al-Monitor. Barghotiuy said this widens the horizon of Arabs' understanding of Palestinians and legitimizes Palestinian citizens of Israel. "Having Dandan, from Majd al-Krum, introduced on pan-Arab TV in Beirut as a Palestinian, and including him in the meeting with the Palestinian president, is new on Arab TV."

Ahmad Abu Saymeh, a radio announcer from Hebron, told Al-Monitor that Abbas’ endorsement of "Arab Idol" was a clever move. "He is an experienced politician and he knows what he is doing. His support to a music program like 'Arab Idol' is similar to his support to bring the Barcelona football team to Palestine in 2013, or his support to Hanan al-Hroub who won in 2016 the Global Teacher Prize."