Restaurant serving up Egyptian fare is buzzing in Gaza 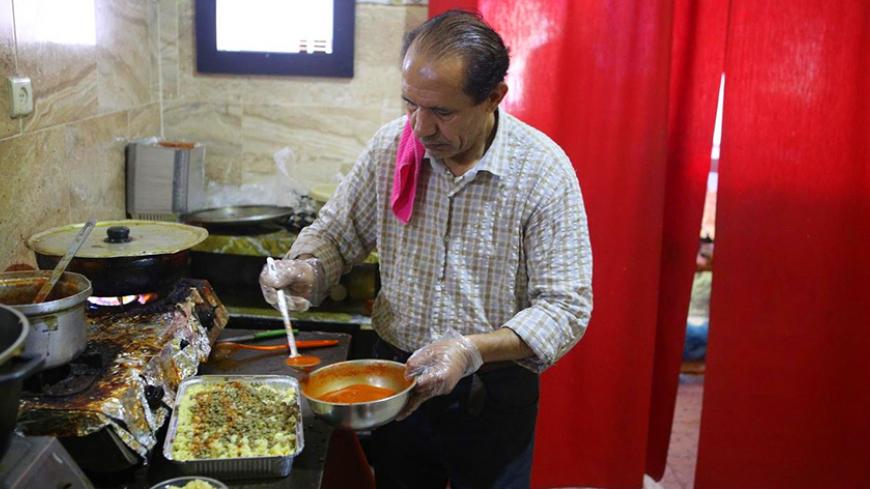 GAZA CITY, Gaza Strip — In 1987, Egyptian national Osama Hassan left his homeland for Rome at the age of 26 in search of a job. He spent 26 years in Italy, first working as a sous-chef in several pizzerias and then, after eight years, Hassan opened his own pizza restaurant.

Within a decade, the ambitious chef had opened three restaurants in Rome offering Italian-style pizza, meat dishes and all types of pasta.

However, Hassan, now 55, yearned to return to the Arab world. He sold his restaurants, left Italy and headed to Gaza, where he opened a restaurant that specializes in kushari, a traditional Egyptian dish made of rice, macaroni and lentils. The move was a success, and his decision to relocate to Gaza appeared to be much more profitable than heading back to Egypt.

On Omar al-Mukhtar Street in the center of Gaza City, hundreds of customers from all over the Gaza Strip head to Hassan’s Nile Kushari restaurant, which is open from 10 a.m. to 10 p.m. each day.

The restaurant is decorated with photos of prominent Egyptian landmarks, such as the pyramids, the Qasr El Nil Bridge and the Nile River, to give the place a genuine Egyptian character.

Hassan hails from the city of Zagazig in northern Egypt and still holds Italian citizenship. He studied French literature at Zagazig University and moved to Italy after graduating in 1987. He returned to Egypt in early 2013 with the idea of opening his own restaurant, but he soon renounced his plan in light of the country's difficult economic circumstances, not to mention the sheer density of a variety of restaurants in the country.

In early 2014, he decided to leave Egypt to settle in Gaza with his Palestinian wife. Despite the difficult economic and social conditions in the Gaza Strip, it was the perfect location for Hassan to open his kushari restaurant. In Gaza, few restaurants, if any, serve kushari, unlike in Egypt where kushari is a popular dish.

He thought about offering Italian-style pizza as well, but he could not find the basic ingredients he needed for his pizza sauce or the specific type of Mozzarella cheese he wanted. He ended up settling on the idea of a kushari restaurant.

He opened his restaurant in March 2015 in Gaza City's central Remal neighborhood. The opening was a huge success, as customers flowed in from the surrounding neighborhoods and Gaza City.

He then moved his restaurant to the Tel al-Hawa district located south of Gaza City, where it was also very popular among the locals. In 2016, he finally relocated to Omar al-Mukhtar Street. By this point, almost everyone in the Gaza Strip knew about his restaurant.

Hassan is pleased that he didn't open his restaurant in Egypt for several reasons. He said there are thousands of kushari restaurants in the country, and that for his restaurant to stand out among them, he would have needed to build up a name and fame, which requires years of hard work. He said that kushari is very common in Egypt and is not served with same quality as his own kushari.

“Customers who have traveled to Egypt before are the most frequent customers," he said. "They know what good kushari tastes like. Those who are unfamiliar with this dish, and who have only heard of it in Egyptian movies, come to my restaurant to try it, and they often come back bringing their friends along. This is how my restaurant gained fame among Gazans.”

He said that some Palestinians mix up the Egyptian kushari dish with the Palestinian mjadara, or lentil, dish due to their similar ingredients.

Though Hassan has experienced an increase in business, he employs only one worker at his restaurant. Together they manage the orders of hundreds of customers. The cost of a plate of kushari at his restaurant ranges from 5-20 shekels (around $1.70-$5.20), depending on the plate's size, compared with 12 to 15 Egyptian pounds (65 to 80 cents) in Egypt. The Israeli shekel exchange rate has helped him earn a higher income to provide for his family.

His wife, Najma Abu Jamea, hails from Bani Suhaila village in Khan Yunis. They married in 1997 in Italy, where she worked as a French-Arabic translator. The couple has two sons and two daughters.

“My husband is from a different environment," she told Al-Monitor. "I follow up on his daily activities since he has to mingle with Gazan citizens. I guide him on what Gazan society likes and the prevailing customs and traditions so that he can adapt and fit in.”

During his three years living in the Gaza Strip, Hassan has observed that a number of new restaurants have closed down, unable to stay open after more than two years of deteriorating economic conditions in the Gaza Strip.

He has tried to understand those restaurants' shortcomings in order to avoid them in his own business. In the future, he'd like to expand his restaurant without opening another branch.

Salah Abu Hasira, the head of the Palestinian Committee for Restaurants, Hotels and Touristic Services, told Al-Monitor that between 2002 and 2006, there were at most 20 Egyptians working in restaurants in the Gaza Strip. These workers returned home after the capture of Israeli soldier Gilad Shalit, when Israel began shutting down the Israeli crossings from Gaza, and when Egypt closed the Rafah crossing.

“At the beginning of the rule of former President Mohammed Morsi in mid-2012, eight Egyptians came to Gaza and they worked in two restaurants," Abu Hasira said. "Income in Gaza was higher than that in Egypt due to currency exchange differences, and this helped them save some money. However, political events in Egypt changed and they returned home in 2014-2015, fearing a prolonged closure of the Rafah crossing.”