Al-Ghodayya family in Jerusalem has been entrusted with the key to the Church of Holy Sepulchre in Jerusalem, and they consider it an honor to protect Christians’ holiest monument. 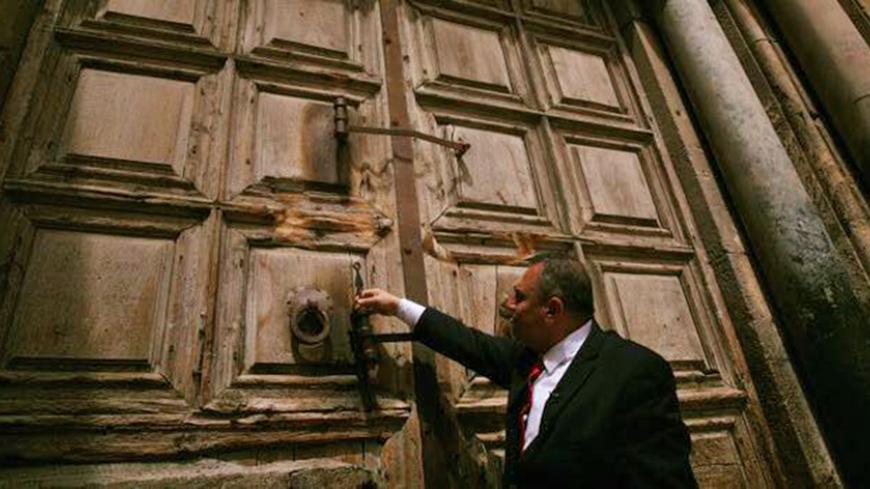 GAZA CITY, Gaza Strip — Following Muslim leader Saladin’s conquest of the city of Jerusalem in A.D. 1187, a dispute broke out between the different Christian denominations about the rightful owner of the key to the Church of the Holy Sepulchre. This prompted Saladin to order the key to the church to be retained by the Ghodayya Hashemite family, which hails from the city of Jerusalem in Palestine.

According to historical accounts, the Muslim family was entrusted with the key upon the agreement of all Christian denominations at the time. Ever since, a member of the Ghodayya family opens and closes the gate and guards the church every day.

Adib Joudeh al-Husseini al-Ghodayya, the current custodian of the church key and holder of the Holy Sepulchre Seal, told Al-Monitor that Saladin entrusted Christians with safeguarding Jerusalem, following the example of Caliph Umar ibn al-Khattab, as a way to preserve the Christian religious monuments.

Ibn al-Khattab had written a letter to the people of Jerusalem during the Muslims’ conquest of the city, entrusting them with the protection of the churches and their properties, demanding that no Jew dwell in the city. The Pact of Umar is considered to be one of the most important documents in the history of Jerusalem and Palestine.

Ghodayya said that his ancestors were a noble family in Jerusalem and that Saladin entrusted them with the key to the church and with the protection of its properties. He said this was an honor to his family and a “bold and blessed” step.

He added that he has more than 165 fermans (a royal mandate or decree) issued by the sultans of the successive Islamic caliphates, providing for the appointment of his family members in positions of honor, including the custodianship of the church key.

Ghodayya opens the church gate every day at 4 a.m. and closes it at 8:30 p.m., receiving important visitors and clergymen.

In addition, he holds another position, which is the holder of the Holy Sepulchre Seal as per a decree by Ottoman Sultan Suleiman the Magnificent. Christian clerics would enter the holy sepulchre chamber in the church to inspect it and make sure that no flammable materials were found inside. The door to the tomb would be then closed with holy beeswax sealant. Ghodayya would then fix his personal seal on it on Easter Saturday every year.

When asked how he feels holding the key to this important church, Ghodayya said, “The church is my second home. When I look at its gate, I can see my grandparents and my great-grandparents. I can see Saladin standing in front of it.”

He added, “I am proud of my family who holds the key to the holiest and oldest church. This should not be a pride only to my family but to every Muslim in the world."

Ghodayya noted that his position is honorary and he does not receive any payment for his services. It is an honorary position that is passed on from one generation to another in the family since the days of Saladin, without any interference from the church, as per Saladin’s will.

For his part, Father Manuel Musallam, the head of the PLO Department of the Christian World, said that the protection of Palestine’s Christians figures in the Pact of Umar and the Holy Quran.

Musallam told Al-Monitor, “The Pact of Umar is the true key to the Church of the Holy Sepulchre. Omar ibn al-Khattab handed the pact along with the key to Muslims before Christians, which is a message that he entrusted Muslims with the [protection of Christians and the church].”

Musallam said that the pact had laid strong foundations for the relations between Christians and Muslims. He considered that the goal behind having a Muslim family entrusted with the key to the Church of the Holy Sepulchre is for protection and to prevent any disagreement between the Christian denominations.

“The noble Muslim family [of Ghodayya] has been present in the church, providing it with protection and power. We do not coexist with Muslims, but we share living with them. We live together, we are not strangers,” Musallam added.

The Church of the Holy Sepulchre is seen as the most important Christian religious monument in Jerusalem and is located in the heart of the Old City. Queen Helena is considered to be the first to have ordered the construction of the church in A.D. 335.

The church is believed to house the tomb of Jesus, who according to Christian belief was resurrected three days after his crucifixion and death.

The church is also believed to include the Calvary, where Christians believe Jesus was crucified.