Iraqi Oil Minister Jabar al-Luaibi spoke to Al-Monitor about production and revenue-sharing disputes between Baghdad and Erbil, and addressed plans to attract foreign investors to the country’s energy sector. 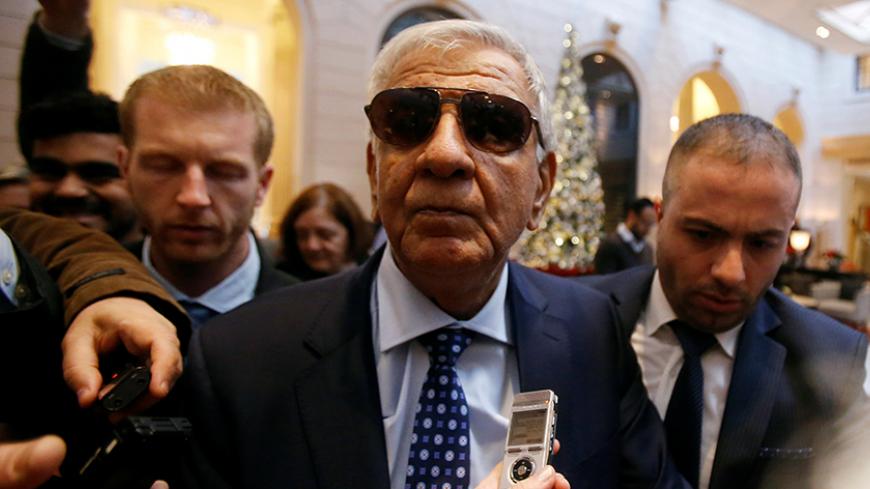 WASHINGTON — Iraq’s Oil Minister Jabar al-Luaibi, speaking to Al-Monitor during a visit to the United States to meet with US government officials and energy executives, addressed the challenges facing his country’s oil sector, including disputes between Baghdad and the Kurdistan Regional Government (KRG) in Erbil over production and revenue sharing.

Luaibi commented on the disputed areas, noting that the KRG takes two-thirds of the total oil produced in Kirkuk, which he estimated at around 500,000 barrels daily.

While he lamented a lack of transparency from Erbil on oil issues in general, the minister stressed that relations between the two sides are going “smoothly.” He said they would eventually resolve their differences, but likely not until after current operations against the Islamic State (IS) conclude.

“The government is not ready to enter into more discussions with the KRG regarding [differences over oil]. … The time for this will come, after the Mosul liberation,” Luaibi said.

A transcript of the interview, conducted by Al-Monitor’s managing editor, slightly edited for clarity, follows:

Al-Monitor:  Do you expect the current agreement that Baghdad has with the KRG over its oil sales and revenue sharing to continue?

Luaibi:  Well, with the KRG we have the treaty that was done four years ago. It was concluded four years ago. It’s still on. But there are some disagreements that appear here and there from time to time. But so far things are quiet and there is a good environment of work.

I have many times coordinated with the KRG minister of natural resources [Ashti Hawrami]. And we are, after all, friends, you know, because he has been working with me for some time.

And things are smooth so far. Sometimes, as I said, differences appear, but we all work on that.

Al-Monitor:  Could you elaborate a bit more on those differences?

Luaibi:  About the differences — for every task, differences appear here and there. The most prominent difference is the absence of transparency from the KRG. They don’t show much regarding the production and export.

So these are really the big issues in our differences. But other things are moving smoothly, because the government is more preoccupied with Mosul and the military operation’s activities in Mosul. So the government is not ready to enter into more discussions with the KRG regarding the differences I noted. I think the time for this will come, after the Mosul liberation, and we’ll sit together and settle our outstanding issues. Now they are taking two-thirds of Kirkuk’s oil, which was under the control of the federal government.

Al-Monitor:  You mentioned Kirkuk. How do you and your colleagues in Baghdad plan to resolve the contention over oil fields in the disputed areas?

Luaibi:  Well, some of the fields were under the control of the federal government. Now, the KRG is sort of in control of them. But we are sort of coexisting.

We have the giant field of Kirkuk, and as I told you, two-thirds [of this oil is taken by] the KRG. And the [remaining] third, we export it through the pipeline that goes through KRG territory, and we divide this third — I mean they take 50% and we take 50%. So really they are taking a share of more than two-thirds.

Al-Monitor:  Last year, a number of emails between the KRG and the Turkish government were released on WikiLeaks. The emails suggested that the KRG reportedly offered to sell Turkey an ownership stake in several oil fields under its control in exchange for loan forgiveness. What is Iraq’s view of these reports?

Luaibi:  Well, to be honest with you, on this issue we heard from the media and saw it on Facebook and here and there — but on the ground we don’t have much. The KRG did not approach us on this, nor did the Turkish government, so we were not officially approached on this issue.

The prime minister [Haider al-Abadi] knows about this. I know as well. But it’s only media speculation. The KRG has not notified the federal government of this — that they are in debt for $1.3 or $1.4 billion — and [so they are offering Turkey a monopoly on] Kirkuk oil. As I told you, the absence of transparency on this issue has caused a cloudy picture on our part, really. And on their part, they are sort of messy. Again, there is no persistence to prod. And there is no clarity; they are not objective regarding the whole issue of oil. It’s just here and there.

Luaibi:  Well, Iraq has to solve this one way or the other. Iraq has to ultimately come to terms with the KRG to resolve the outstanding issues, and one of them is the oil fields — particularly the giant field of Kirkuk. And the government is determined to do that. But now the government is preoccupied mostly with Mosul activities. But definitely, one way or the other, because oil is very important to Iraq, it has to be settled. And we had an agreement four years ago with the KRG. And this agreement has to be fulfilled and it has to be honored. So let’s see the outcome of the coming days, after the liberation of Mosul.

Al-Monitor:  Speaking of Kirkuk, what is the current daily production of the Kirkuk oil field?

Al-Monitor:  And do you have any international partners in Kirkuk?

Al-Monitor:  And a third of that goes to the Iraqi government?

Al-Monitor:  And the other two-thirds?

Luaibi:  Yes, they export it and they keep the proceeds.

Al-Monitor:  You were just in Houston for CERAWeek [energy conference], and I’m sure you had a lot of really great meetings with the various oil company executives. Have you seen an increase in interest in investing in Iraq from international companies?

Luaibi:  Well, many companies have been approaching us for investment lately, and we have opened the door wide for investment in refineries, infrastructure, upstream and midstream. And in the north, there are investors — from the KRG, they are Kurds. And they ... are preoccupied with the activities of new refineries and so on and so forth. So there are investment activities in the north and in the country as a whole.

Al-Monitor:  Where would you say many of your international partners are from, i.e., the companies that are investing in Iraq?

Luaibi:  Well, as you know, in Iraq now, 14 IOCs [international oil companies] are working on 14 oil fields. And one of them is American ExxonMobil, and that's in the north and the midland. And we have British; we have Chinese; we have other nationalities. We have Malaysian; we have Russians and Koreans. So we have those, and they are investing in the — we call it the petrol license round.

And they invest billions of dollars, but we give them a return, of course. They invest, and we pay back on a monthly basis. Other investments are private investments. There are domestic and other private Arab investors — they have a lot of interest to come and work in Iraq.

And there are some Kurds, and they’re doing very well in investments. They are rich and they have money, and they make investments. So investments are open for everybody. And the other thing really, we only have a little interest from Americans. I don’t see many American companies that are participating in investment. They come, they meet me and then they disappear. I don't know.

So there are great opportunities now in Iraq for investment. We had a tender a few months ago for five big refineries. They have a total exceeding one million barrels per day in the south and the midland. And we have also a tender for reconstruction and rehabilitation of the Beiji refinery, which was demolished by ISIS. So far, I don't know of much response to this, really.

So talking about investment, we are now in a very comprehensive discussion with ExxonMobil. And I even had dinner with them and met in Houston to develop two of our giant oil fields, Nasiriyah and [Nahr] Bin Umar, together with integrated projects to do water injection — seawater injection — which is a giant project. It’s about 7 million barrels per day from the sea; it’s treated and then distributed to the field. And other parts include the expansion of our export facilities, whether offshore or onshore. And we have moved to good stages with ExxonMobil, and I hope that this would be concluded before the end of this year. And I asked their president the other day — I said, “Please seize this opportunity, because I’m taking a lot of interest in this and I’ll push it through the Cabinet. But don’t — you know, don’t go in slow motion.” And he agreed with me.

So we have lots of investments, really. Chevron, the American company, has approached us. And they are very, very interested in investing in developing the Nasiriyah oil field, along with building a refinery of 150,000 barrels per day.

There are many small companies, but I forget their names. But again, they come and go. The Chinese are very keen and very anxious to go to Iraq for more investment. As you know, the Chinese hold the big shares of money.

Al-Monitor:  We have one last question. You mentioned the Americans and the Chinese. Have you seen an increase in Russian interest in Iraqi oil fields? What about the French company Total?

Luaibi:  We have Russians. We have Lukoil working in West Qurna 2, and we have Gazprom working in one of the fields. We have Kogaz developing gas fields in the midlands — well in the north and midland. And we have the Chinese.

We have more than 12 or 15 companies of the giant CNPC. And we have other organizations. So there are many Russians and Chinese. I see Total at least once a month, and they are very interested and they regret that they did not show much interest in 2008 and 2009. But again, they want another opportunity to be given to them so that they can catch up.

Al-Monitor:  Which field in Total did you mention they were interested in?

Luaibi:  The company Total. Their CEO came to me two months ago, and he expressed their willingness to work in Iraq, take any project. They are very interested in gas, and we have lots of projects. And he sent another delegation about two weeks ago before my coming to the US. And they, again, they stressed their interest to come to Iraq. And I directed them to go to work on the gas system, gas utilization. So there are many, many companies approaching.

Al-Monitor: Thank you very much.