In his annual Nowruz speech, Iran’s supreme leader urged the government to ramp up domestic production, while calling on ordinary Iranians to purchase locally made goods. 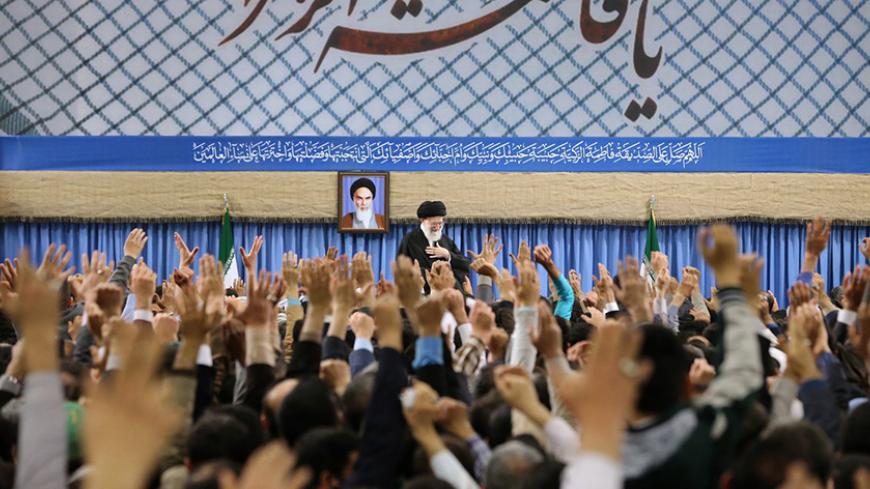 Iran’s Supreme Leader Ayatollah Ali Khamenei has warned that he will stand up to anyone who refuses to accept the outcome of the upcoming May 19 presidential elections.

In his annual speech on the occasion of the arrival of the Iranian New Year, Ayatollah Khamenei spoke mostly about Iran’s economic situation as well as the coming polls. The March 21 Nowruz address was held at the shrine of the eighth Shiite Imam Reza in Mashhad, and follows Khamenei's issuing of a brief video message March 20.

Encouraging people to take part in the upcoming polls, Khamenei said, “Elections are a pivot of religious democracy. The election process is a source of glory and honor to the nation against foreign claims to the contrary; it is a source of national unity and makes the nation stand in line with a single lofty objective: to defeat the many political and government establishments [opposed to Iran]. The [1979 Islamic] Revolution provided religious democracy, which is based on elections. To participate [in the polls] and a high turnout is important, to which all should contribute.”

Warning against refusing to accept election results, the supreme leader added, “I would never intervene in the elections, and I wouldn’t even say whom to vote for. I would [only] do so when specific people and circles want to undermine the results of elections, as occurred in past elections.”

“Whoever does not accept the results of people’s votes, I would stand up to them. In 1997, 2001, 2005, 2009 and 2013 [presidential elections], this happened and I stood up. Some of [my interventions] have been done in front of people, and some other [interventions], people haven’t become aware, and I was aware and stood up to them,” Khamenei said.

In the 1997 and 2001 presidential elections, Reformist Mohammad Khatami won the competitions by a landslide. In the 2005 and 2009 elections, hard-line Mahmoud Ahmadinejad was declared victorious, though in the latter vote, his Reformist rivals alleged vote rigging. 2009 presidential candidates Mir Hossein Mousavi and Mehdi Karroubi, who objected to the results, have been under house arrest since 2011, following extensive post-election unrest. In 2013, moderate incumbent Hassan Rouhani defeated his conservative rivals, promising an end to the nuclear crisis: This pledge was fulfilled in 2015, following two years of negotiations with six world powers.

Underscoring the prioritization of domestic production, the supreme leader said, “The importing of products which are being produced inside the country must be recognized as haram [religiously impermissible] and illegal.” He added, “Domestic production should not be offset by imports, as it is unnecessary and a source of humiliation. Since they hit domestic production and deprive it of competition, [only] the most essential goods should be imported." He indicated that many domestically produced goods should not be imported in great quantities.

Expressing dissatisfaction over smuggling, which deprives the government of customs revenues and otherwise damages the economy, the supreme leader said, “The responsible officials and [state] bodies should address the major [smuggling] sources and culprits, [and] major bottlenecks should be strictly investigated. … Only a small part of the goods are investigated at the ports. This is to serve foreign goods, and should be prevented; only the great smuggler or smuggling agency should feel unsecure in their corrupting of the economy.” Khamenei said smuggling is worth some $15 billion annually, while “some speak of $20-25 billion."

Speaking about the broader state policy of forging a “resistance economy,” Khamenei also called on ordinary Iranians to buy domestically made goods, “We should work with more than five or six countries. The security of investments and the national economy should also be protected, [and] the unnecessary paperwork should be removed. The public, however should accept their share of responsibility and contribution [to the economy] as well: They are not only producers, but also they are consumers; the domestic consumer should set a priority to buy national brands, shunning foreign brand names. This is a genuine demand.”

In his March 20 video message, Khamenei notably named the new Iranian calendar year of 1396 as the “Year of Resistance Economy: Production and Employment."