In light of the current economic situation in the Palestinian territories, culture and art have become luxuries. 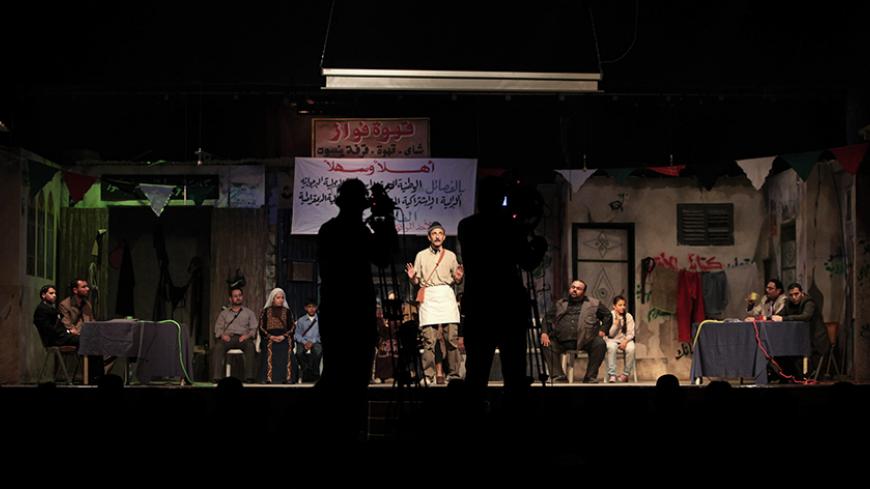 Amid the deteriorating economic conditions plaguing the Gaza Strip, culture has become the least of society’s daily needs. Watching a play or listening to poems is no longer on the list of Gazans’ priorities at a time when unemployment increases by the day and the economy tilts on the brink of collapse.

The number of cultural activities dwindled amid an increase in the number of political and human rights seminars and conferences held by civil society and governmental organizations. Add to this the growing support for relief and emergency projects instead of activities related to art and culture.

The statistics contained in the 2011-13 strategic cultural plan published by the Ministry of Culture in Ramallah show that no more than 0.003% of the Palestinian Authority’s (PA) general budget was allocated to cultural affairs across the Palestinian territories, including Gaza.

Mohamed al-Bouji, an author and professor of literary criticism at Al-Azhar University, believes that the Gaza Strip is not receiving enough support from the authorities in Gaza and Ramallah. He said that writers in the Gaza Strip are invisible as they rarely publish books or take part in cultural activities, be it in Gaza or abroad.

Bouji told Al-Monitor, “It is a pity that discussions related to culture and cultural activities have become a kind of luxury. As the blockade steps up and the political divide deepens, cultural topics no longer matter and cease to be essential.”

The first agreement was signed with artist Mohamed Harb to financially support a film project; the second with artist Ibrahim al-Awadhi to establish an art gallery in Gaza; and the third to carry out the “Gaza Graph” film project by director Yousef Nateel.

Harb told Al-Monitor, “This is my first experience with the ministry,” adding that it is a chance for him to activate the cultural and artistic scene in Gaza.

He said that the project consists of training and short-film production workshops dedicated to 20 young men and women who will be selected based on interviews and who will tell their stories in a seven-minute film. “The project aims to discover those who have cinematic talent,” he said.

Nateel told Al-Monitor that it is with the help of a team of photographers and researchers that he managed to garner the support of the ministry to produce his film.

He explained that his documentary tackles the history of photography in Gaza City, saying, “I came up with the idea in 2012, and I have been trying to get the necessary support since then.” He explained that the grant of the Ministry of Culture, which he did not disclose, is sent in installments depending on the film stages or the completion of the project.

The ministry stays in touch with people who have projects to execute in order to make sure that all the project stages are carried out without any obstacles. By the time the project is completed, the people in charge will have received the amount agreed upon.

Ihab Bseiso, the minister of culture and chairman of the Cultural Fund Management, told Al-Monitor, “Our role is to activate cooperation with the various Palestinian cultural institutions in order to unify the cultural activity by supporting festivals, seminars and the various cultural programs in Gaza and the West Bank.”

The minister, himself a poet from Gaza City, said, “Gaza has always been part of our interest at the Ministry of Culture in all fields.” He stressed that the cultural scene cannot be complete when there is a Palestinian geographical part missing. Despite the tragedy of division, the Gaza Strip is present in the Palestinian cultural scene “to defy the occupation and those trying to disrupt the cultural activities that safeguard the national identity.”

Bseiso further stressed the importance of supporting Palestinian individual creativity wherever it is. “It is no secret that the Israeli occupation policies are aimed at obliterating the Palestinian cultural identity and falsifying the historical and cultural awareness. Thus, our role as intellectuals and cultural institutions is to confront these policies by supporting serious initiatives and qualitative creations that reflect the depth, history and clout of the Palestinian culture,” he said.

Bseiso, who took over the portfolio of the Ministry of Culture in early 2016, said that the rate of cultural activities in Gaza has improved, adding that the number of cultural centers is logical considering that there are 11 provinces in the West Bank and four in the Gaza Strip.

The 2014-16 strategic cultural plan issued by the ministry in Ramallah had mentioned several obstacles facing cultural activities — namely: the split between the West Bank and Gaza; the risks faced by the Palestinian economy; the slower economic growth in the West Bank and Gaza; the ensuing shift in the priorities of family providers and innovators; and the Arab Spring that shifted the Arab and international support from Palestine to other areas currently facing challenges, such as Syria.

The strategic plans published by the ministry in Ramallah every three years agreed that the Israeli practices separate the Gaza Strip, the West Bank, Jerusalem and the 1948 lands from each other, affecting the Palestinian cultural movement and denying it a favorable and stimulating environment. This made creativity in the Palestinian cultural production the exception rather than the rule.

Despite the frustration, cultural institutions such as the A. M. Qattan Foundation and the Edward Said National Conservatory of Music managed to get over the Palestinian division to create an atmosphere of creativity and unified cultural competition at the level of narration, poetry and music. However, the Ministry of Culture has yet to unify its website, as its website in Gaza is different from the West Bank’s website in terms of activities, approach and target group. One could even say they are two websites targeting two different states.