Gazan brothers Arab and Tarazan Nasser’s short parody “Condom Lead” has been nominated at the Cannes Film Festival, a first for producers from the Gaza Strip, writes Asmaa al-Ghoul. 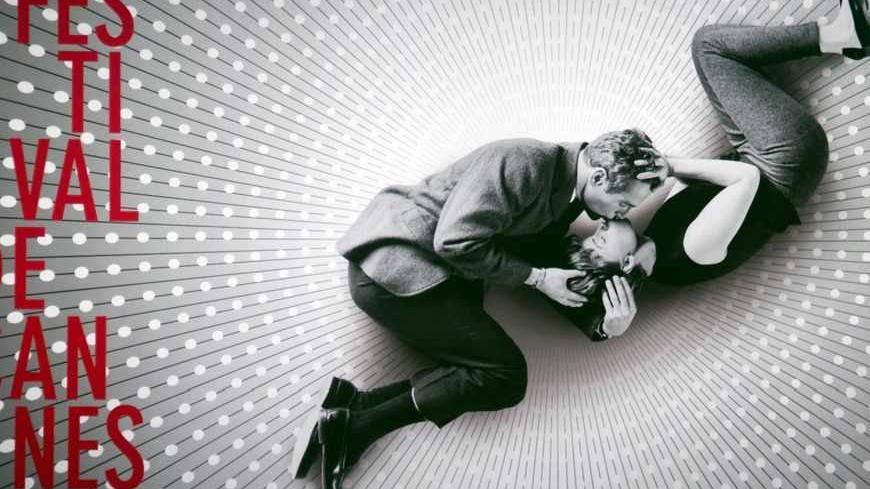 A projection taken April 18, 2013, from the official poster of the 66th Cannes film festival, taken from a picture of Joanne Woodward and Paul Newman, photographed during the shooting of the 1963 film "A New Kind of Love." - REUTERS/Charles Platiau

A couple was trying to have sex, but the act turned suddenly into guilt and inability as a drone in the background drowns out all other sounds and words.

The wife approached her husband. He wanted to kiss her when a new round of bombardments started, interrupting them once again. Their daughter started to cry; the mother went to lull her back to sleep and returned to her husband. The sound of the drone still drowned out everything. The woman touched her husband’s foot with hers and then: Boom! Another explosion. The little girl started to cry again. The mother went to her daughter. The father blew up the condom, which turned into a balloon. Balloons filled the house; 22 days have passed since the beginning of the Israeli war on Gaza. The husband went out on the balcony to see condom balloons floating out of every house in Gaza that night.

This is the story of Condom Lead, a film parody of the first war on the Gaza Strip in 2008-29, known as Operation Cast Lead. It has been entered into the short-film competition at the 66th annual Cannes Film Festival. This movie is the first from the Gaza Strip to make it to the international competition.

The directors are twin brothers Arab and Tarazan Nasser. They left the Gaza Strip a few months ago to participate in a film festival in Jordan and remained there to shoot their daring idea, which they would have never been able to shoot in Gaza, as Tarazan noted in an interview with Al-Monitor via Skype.

“I feel extremely happy, especially since the Cannes festival is a real challenge," he said. "This is not to mention that this was the first Palestinian short film that made it to the contest. We felt that we have accomplished something real and substantial.”

He said that his brother Arab was expecting the movie to make it to the final competition. It is not a matter of conceit or arrogance, but they were well aware that their work was creative, humane and beautiful.

He also added that a Palestinian team, which founded the company known as Made in Palestine, was behind the movie's success. He stressed that the movie was the first for its leading actor and actress, and the first for the company. A company statement said the film festival's short-film selection committee received 3,500 submissions from 132 countries. New Zealander director Jane Campion heads the committee that will select the short-film Palme d'Or.

For his part, Arab — the spitting image of his brother — said that they were shooting the film in February. The film was an huge challenge, as it has been shot in one day, with a production cost of 5,000 Jordanian dinars, or about about $7,000.

“We were mainly inspired by the tragedy of the first war on the Gaza Strip, which lasted 22 days. Our message is aimed at awakening the international community and the collective conscience of the Arab World to the Gaza Strip and the importance of protecting the people’s rights and culture from the hegemony of politics,” Arab said.

Although they prefer to allow viewers to interpret the film, they explained the idea behind it. “Love cannot be sidelined. It is another form of resistance. According to the movie, the war machines cannot triumph over human will, but they can destruct the spirit and flesh,” they said.“The film talks about the people’s right to love. It is possible to recover from war, but there is no cure for intimacy. On the contrary, love and passion become like balloons waiting to explode.”

Tarazan stressed that intimate relationships can sometimes be a search for safety in time of war. He also added that the film addresses the experience of war anywhere in the world, and the idea of the condom is a symbol of prevention, which Gaza needs to prevent wars against it.

The directors allowed me to watch the movie in postproduction. It leaves you breathless. It shows how the war can mess with people’s desires and affections, turning love into a sense of betrayal of the homeland.

They said that they have been facing many obstacles in Jordan as they have recently moved there. However, the producer helped them to overcome them, given that  he has been living there for a long time since leaving Gaza as well.

Tarazan believes that the film conveys a philosophical idea of immortality in times of war, the importance of joy,  human fear, as well as death, murder and blood in an intimate scene that may occur daily between couples in wars.

The brothers hope to return to Gaza soon to work in the cinema industry without political and social pressures and constraints, which they used to face while living there.

“In the end, our work is dedicated to our country and to the Gaza Strip, but there is the political divide on the one hand and the war on the other,” said Tarazan.

He added that the idea of the film was developed by Khalil al-Mazin, a Palestinian director who lives in Gaza. He had told them about it a long time ago but they could not even think of implementing it in the Gaza Strip, as it was very daring.

Algerian actress Maria Hamdi plays the leading role, while Palestinian Rashi Abdul Hamid fills the male lead as well as producing. A group of photographers, called “Plant 612 for Ideas,” helped the directors to complete the film.

They hope that the film’s message will overcome stereotypes about Gaza, which are linked to death and war.

The brothers laughed when asked about the tuxedos they have to wear to the festival on May 18. According to the protocol they have received from the Cannes festival management, they are obliged to wear formal suits — which would be a first for them.