Michael Flynn is facing criticism for lobbying for Ankara prior to President Donald Trump’s inauguration, but the Turkish businessman who hired the disgraced former national security adviser told Al-Monitor he did not use government funds to pay Flynn. 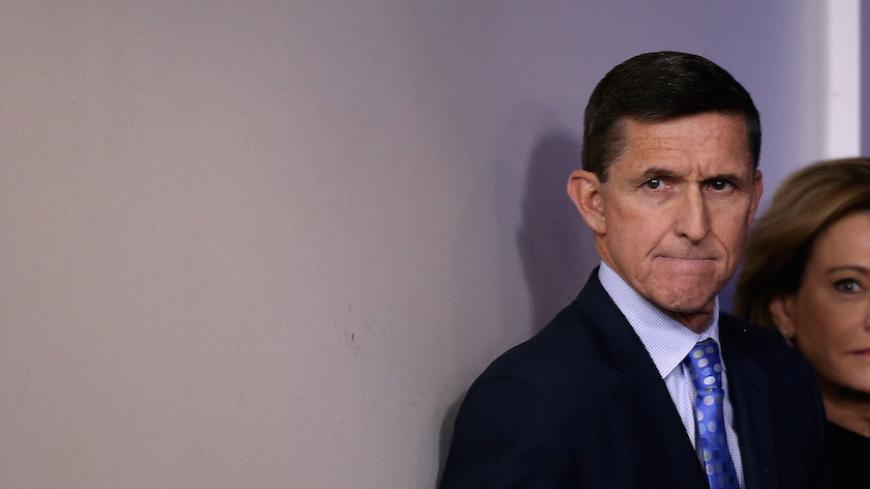 National security adviser Michael Flynn arrives to deliver a statement during the daily briefing at the White House in Washington, Feb. 1, 2017. - REUTERS/Carlos Barria

Michael Flynn, President Donald Trump’s short-lived former national security adviser whose contacts with Russia cost him his job, is embroiled in a fresh controversy after telling the Justice Department that his consulting firm, Flynn Intel Group, was hired by a Turkish businessman to do work that “could be construed to have principally benefitted the Republic of Turkey.”

The retired general’s decision to provide details of the relationship to the department under the Foreign Agents Registration Act (FARA) stressing that his firm had not received any payment from the government of Turkey was apparently calculated to pre-empt any suggestion of wrongdoing. But it has had the opposite effect. Vice President Mike Pence told Fox News that it was the first he had heard of the former National Security Agency chief’s Turkey ties. “I think it's an affirmation of the president’s decision to ask Gen. Flynn to resign,” he said.

Alptekin’s initial comments via Twitter didn’t help. He said he had not hired Flynn to do any lobbying. But his denials appeared to contradict Flynn Intel Group’s disclosures to the Justice Department. These include a Sept. 19 meeting in New York City arranged by Alptekin between Flynn, Turkish Foreign Minister Mevlut Cavusoglu and Energy Minister Berat Albayrak, who is Turkish President Recep Tayyip Erdogan’s son-in-law.

In its filing, Flynn Intel Group said it “conducted open-source research for Inovo and at Inovo’s direction. The research, which was conducted by independent contractors retained for this purpose, focused on Mr. Fethullah Gulen and charter schools in the United States that are associated with, or allegedly associated with, Mr. Gulen.”

Gulen is the Pennsylvania-based Sunni cleric Turkey formally accuses of masterminding the failed July 15 coup. Turkey is demanding Gulen’s extradition and has mounted an all-out campaign to prove his guilt.

Over the past few months, former Turkish generals, journalists and others have helped press the government’s case at assorted Washington panels against what it calls the Fethullah Gulen Terror Organization. It would hardly be surprising, therefore, that Turkey would engage DC lobbyists to help out, and it did: Amsterdam & Partners LLP, which announced the deal amid much fanfare at the National Press Club last year.

But if Turkey wanted to retain Flynn’s services as well, why would it go through Alptekin’s company instead of doing so directly itself? A lawyer in Washington with intimate knowledge of the lobbying business said it would have “every reason to do so.” Speaking to Al-Monitor on condition of anonymity, the lawyer said, “Lobbying funded by a private individual is far more subtle and effective, because when governments do the funding, the contractor is required by law to do a FARA filing with the Justice Department and anything positive you have to say about the foreign government then sounds like what it really is: propaganda.”

But Alptekin emphatically denies using Turkish government funds to pay Flynn. In a telephone interview with Al-Monitor, he said his arrangements with Flynn were being distorted. “I did not hire Flynn to do lobbying,” he insisted. So what had he hired him for?

Alptekin said he hired Flynn’s company “principally to produce geopolitical analysis on Turkey and the region.” This was because Inovo had been hired by “a regional energy company that is considering an investment in Turkey” to do the analysis. But the company had not been happy with their product, so he turned to Flynn. Alptekin said he was bound by a nondisclosure clause in his contract with the regional energy company to not identify it by name — nor could he divulge the nature of its investment, which would potentially be “huge.”

Alptekin said, “Raising money for a multibillion project of this scope necessitates improving relations between Turkey and the United States, and Gulen is obviously a big thorn. He needs to be extracted.”

Alptekin, who is the president of the Turkish American Business Council, said he was a “Turkish patriot” who had commercial interests in the United States. Alptekin therefore had “a personal stake in seeing the relationship heal,” and this was part of his motivation in hiring Flynn.

Thus, in the course of his negotiations with Flynn Intel Group, “the need for a lobbying and PR component was agreed upon but never executed, which is why I reclaimed and they reimbursed some $95,000,” he said.

Alptekin revealed that he had signed a three-month contract with Flynn in late August 2016 and had paid his firm a total of $450,000. “I was very satisfied with the analysis reporting part of the project; I got my money’s worth,” he noted. The money to pay Flynn had come from Inovo and "partly" from his own accounts.

Alptekin admitted to seeing the draft of a controversial article in which Flynn called for Gulen to be extradited. He had earlier denied being consulted about it prior to its publication, but he said he had not had any influence over its final version and that he had not commissioned it. Published on Nov. 8, Flynn’s essay drew ill-informed parallels between Gulen and the Muslim Brotherhood. “Anyone who knows anything about Turkey would know that the government would hate its worst enemy [Gulen] being likened to a group [the Muslim Brotherhood] that it views with sympathy,” he said.

Alptekin repeated earlier assertions he made to various media outlets that the New York meeting between Flynn and the Turkish ministers was “a last-minute thing” and that he had arranged it not in his capacity as Flynn’s business associate, but rather “wearing my Turkish American Business Council president’s hat.” Gulen and the US alliance with the Syrian Kurdish People’s Protection Units in its fight against Islamic State militants in Syria, which Turkey is deeply unhappy about, had come up during the conversation. “The Turkish side did most of the talking,” Alptekin recalled. He insisted, however, that Flynn’s encounter with the Turkish officials was a one-off thing, and that he had played no role in a breakfast meeting between Cavusoglu and Flynn in Washington, which took place immediately after Trump’s inauguration while Flynn was still in office.

A Washington-based consultant familiar with Turkish lobbying efforts said that “Alptekin is known as a risk taker. He’s smart, he’s ambitious and he plays big. Sometimes he wins; other times, not. But if there is any impropriety in this affair, the principle responsibility lies with Flynn.” The consultant, who declined to be identified by name because of the delicate nature of the issue, added, “Flynn must have known what he was getting himself into.”

As for Alptekin, things seem to have gone very wrong this time. The 40-year-old, who made his first million in his early 30s, said he had “bragged” to the regional energy company about his relationship with Flynn. “But they let go of me three weeks ago — probably because of all of this.”