Polish artists turn Cairo's City of the Dead into gallery

Colorful graffiti breathes life into the City of the Dead. 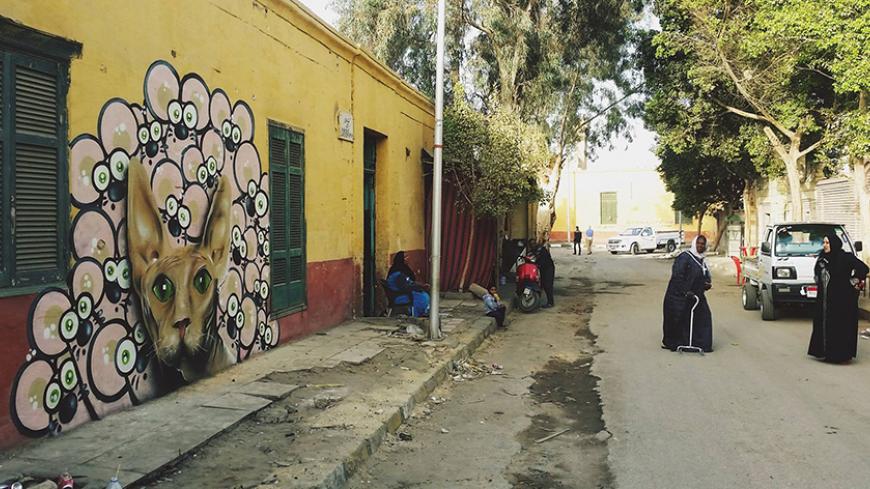 Graffiti artist Lukasz Zasadni's work is seen on a wall in the City of the Dead, Cairo, Egypt, in this image uploaded Dec. 1, 2016. - Facebook/fmfanpage

The City of the Dead, which is located below the Mokattam Hills in southeastern Cairo, has become a gallery with colorful graffiti adorning its pale walls.

The graffiti was a part of a project called "Outside In: The Art of Inclusion — A Place for Arts and Culture in Cairo's City of the Dead.” Archinos Architecture implemented the project in cooperation with the Polish Embassy in Cairo between August 2015 and December 2016. The project was funded by the European Union.

Two Polish artists were invited to paint cheerful graffiti on the walls of the area to let its residents feel surrounded by the arts. This neighborhood is home to hundreds of thousands of Egypt's poor.

Lukasz Zasadni, one of the two Polish graffiti artists who participated in the project, told Al-Monitor, "Me and some residents of the neighborhood together selected the best places in which I painted my graffiti. I told them that I needed a visible place to paint my graffiti on, and we walked around the alleys and they showed me the better places. The following days after receiving the permission, I painted them."

Zasadni is also known as Franek Mysza, the name of the famous mouse he has been painting for 12 years. He said that the message of painting a mouse is to give a smile to people and to cheer them.

"Wherever the people go, they see them just smile. So the day becomes better," he said.

On one graffiti-filled wall, the brown-colored mouse with its big ears and green eyes is shown putting a leash on a black Pharaonic cat. The cat, which was painted by Arthur Chałupka, the other Polish graffiti artist, is a revered animal and was important to Egyptian society and religion in ancient times. Cats received the same mummification after death as humans. The two artists were aware of the Egyptian cultural heritage when they painted their graffiti.

"People quickly understood the message, and they really liked our idea to paint the mouse with a cat. It is known that in Egypt, they all love cats," Zasadni said about the feedback of the residents. "The kids were so delighted."

At a narrow alley, a man is holding his cellphone to take a photo for his son who stands happily beside a painting of the smiling Franek Mysza.

"I have never seen such a beautiful thing before," said Hajj Ahmed, one of the residents. "It gives life to our neighborhood."

The City of the Dead area dates back to the seventh century during the Muslim conquest of Egypt. During that time, Islamic Cmdr. Amr Ibn Al-Aas founded Al-Fustat as the first capital in Egypt and built his family's necropolis at the foot of the Mokattam Hills. The number of the Islamic cemeteries increased through history in this neighborhood, which has been a mecca for Muslim pilgrims who seek blessings. Many people there believe that living beside the shrine is a blessing that will bring a divine reward.

In the 1960s, there was a massive rural migration due to the rapid urbanization in and around the Egyptian capital, so the cemeteries have become shelters to many homeless people. Following the huge earthquake that hit Cairo in 1992, many people were forced to move into family tombs, and that added to the number of the people already there.

Living conditions in this area improved during Hosni Mubarak's 30-year rule, as many cemeteries received running water and electricity. In addition to that, some parts now have apartment blocks, two schools, a medical center and a post office.

The graffiti project also included the conservation of the grand reception hall of Mamluk Sultan al-Ashraf Qaytbay's funerary complex. This highly decorated, domed mausoleum, one of the most impressive monuments in the City of the Dead, was built by Qaytbay, who ruled from 1468 to 1496. This reception hall will be used as a cultural hub to serve the City of the Dead's living community.

Polish architect Agnieszka Dobrowolska, the founder of Archinos Architecture, said a number of cultural events have been organized in the neighborhood in which artists held workshops for the children and young people as well.

"What we want to do is to bring together the old heritage, the traditions of this particular place, with creative contemporary art and with various cultural events to promote diversity. Old meets new, death and life come together in the City of the Dead, where we can exchange ideas and culture between East and West," Dobrowolska told Reuters.