Meet the boxer who blows into glass in Cairo

Glassblowing dates back to pharaonic times in Egypt, but these days there's one man trying to keep the tradition alive. 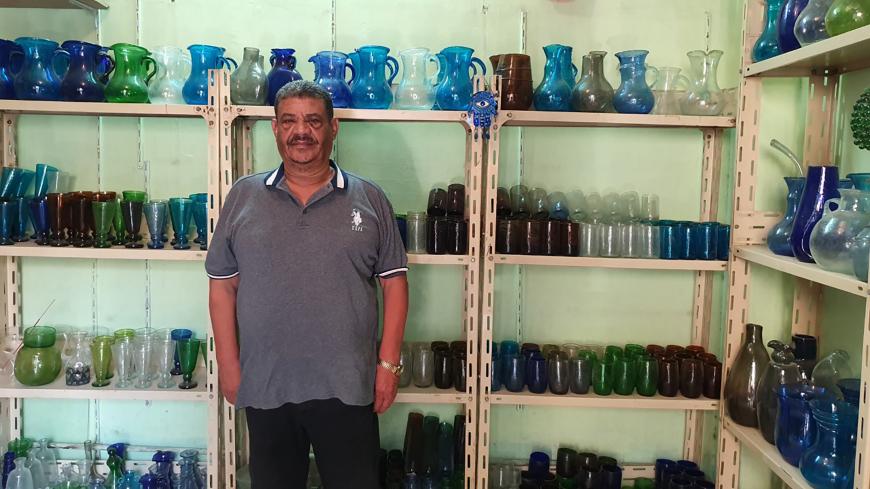 Egyptian glassblower Hassan Hodhod posing for a photo at his workshop in the City of the Dead, Cairo, Sept. 19, 2019. - Salwa Samir/Al-Monitor

Cairo's City of the Dead has held the mausoleums of Egypt's ruling elite since the 7th century, when Amr Ibn al-As, Arab commander for the Muslim conquest of Egypt in 640 and then its governor, established a family burial place there. The combination of the quiet, unpaved streets of the cemetery on the city's outskirts and the ambient noise from nearby busy markets, schools and workshops makes the area oddly calm but at the same time vibrant. The tall modern apartment blocks providing cheap housing just behind the mausoleums contrast sharply with the eeriness of the ancient tombs.

Hassan Ahmed Ali, dubbed the “last remaining glassblower of Cairo” by local media, maintains his workshop near the funerary complex of Sultan al-Ashraf Qaytbay, the 15th-century structure printed on Egypt's one pound banknotes.

Popularly known as Hassan Hodhod, Ali represents the last generation of a family of glassblowers. He has taught the trade to his children, but there is no guarantee they will choose to make a living working under the heat more than 10 hours a day.

“I would not blame them if they didn't,” Hodhod told Al-Monitor. He recalled how his own father had tried to discourage him from glassblowing, telling the young Hassan that the jinns - evil spirits - made the glass expand.

“My father and grandpa ­worked in this profession for over a century,” Hodhod said. “When I was young, I saw my father keep long hours, sitting in front of the hot furnace. Despite the heat in the workshop, nothing would make me leave. I so loved watching him concentrate on work.”

Hodhod was also fascinated by boxing in his youth, and for awhile even became a professional boxer. His time in the ring inspired a comedy, “Kaboria” (Crabs), starring Ahmed Zaki as Hodhod. The Australian actor Cate Blanchett made her big screen debut as an extra in a party scene. Hodhod ultimately decided to drop boxing to blow glass full time, working 12 hours a day, sometimes including weekends.

“My father certainly did not think that I would stick with this profession and continue to practice it all my life,” said the 63-year-old artisan. His two brothers chose driving tuk-tuks over glassblowing.

The shelves of Hodhod's small workshop are lined with delicate glasses and vases of all colors, sizes and shapes, including tableware, lanterns and candlesticks. A certificate bearing a UNESCO stamp hangs on the wall affirming that in 2005 Hodhod had taken part in a workshop of glassblowers from Mediterranean countries in Tunis.

He prefers natural colors, particularly a vivid turquoise, which he likens to a shade he has seen on Pharaonic tombs. It is durable and obtained with copper oxide.

A number of tourists and students visit Hodhod's shop, the former to buy pieces of his delicate, handmade products and the latter to learn his disappearing craft. No schools in Egypt teach glassblowing, despite Hodhod's persistent advocacy that they do so.

Hodhod not only blows glass, but he also makes repairs. He has restored the broken glass of windows in historic mosques in the City of the Dead as well as in nearby areas, including Darb al-Ahmar, an area rich in medieval Islamic architecture.

The excavation of a 3,000-year-old glassmaking furnace at Tell el-Amama, 200 miles south of Cairo, revealed that glass manufacturing flourished as a craft in Egypt at least as far back as the reign of Akhenaten. Hodhod told Al-Monitor that glassblowing has not changed radically since pharaonic times.

“You shape the glass by putting a piece of molten glass at the end of an elongated hollow blowpipe, and you blow through it to produce the form you desire,” he explained. All of this has to be done in front of a hot furnace that the blowers use to keep the glass fluid as they give it shape.

Hodhod's shop was in its heyday in the 1950s and 1970s, when both Egyptians and foreigners crowded into his shop to buy his productions. Business began to slow in the 1980s, when increasing numbers of people began to prefer imported glass either for the brand name or the cheaper prices.

Thus Hodhod found himself making appearances on talk shows and other programs, tirelessly lobbying for a school or a training program to sustain glassblowing as a craft. He has also met culture and antiquity ministers to urge them to shed more light on the profession and establish a school.

“Nothing was done,” Hodhod lamented. He added, “If the state pays no attention to what we do here, why would they?”