A state of confusion and uncertainty prevails among Syrians living in Turkey, after the announcement by US President Donald Trump at the end of last month of his decision to create safe zones for civilians in Syria. 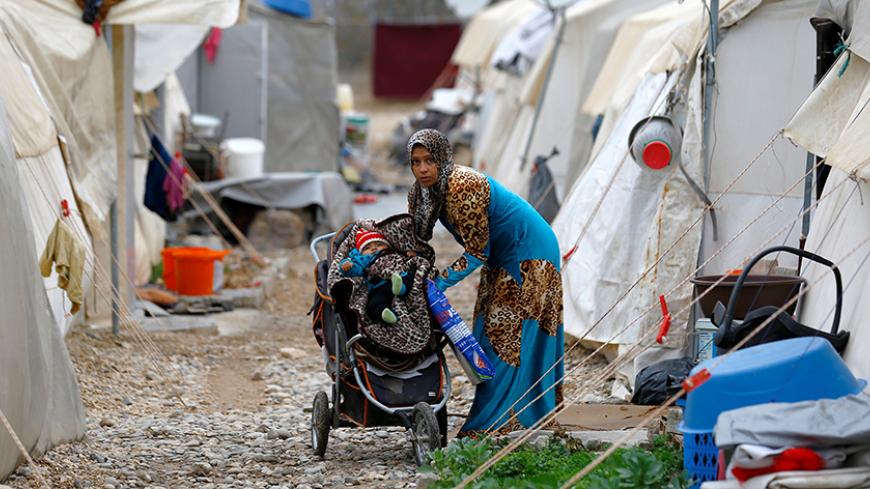 GAZIANTEP, Turkey — Mohamed Fadel owns a small clothing shop selling ready-to-wear clothing for women and children in the old market in this city in southern Turkey. He opens his shop for more than 12 hours a day to serve his customers, mostly Syrians living in Turkey.

The merchant did not pay much attention to US President Donald Trump's recent statements regarding the creation of safe zones in Fadel's homeland, Syria, in an ABC News interview broadcast Jan. 26.

Fadel, 52, hails from Aleppo in northern Syria. Back home, he owned a textile factory. After the onset of the war, he left his home and all of his properties in Aleppo and fled to Gaziantep, where he has been living for four years. He decided to open a clothing shop since this fell within his previous line of work.

The ongoing war divided Aleppo between a western part controlled by pro-Assad regime forces, and an eastern part held by the Free Syrian Army (FSA) factions. However, on Dec. 23, the FSA forces were defeated and fully retreated from Aleppo.

Fadel said of the safe zones contemplated by Trump, “The borders of such zones will be closed while industrial and commercial activities need large cities, thriving markets and open internal and external borders to prosper.”

Noting that the zones in question would most probably be located in Aleppo's northern countryside and eastern countryside, he said, “Most of these areas are rural and disconnected. I would not work or move to live in such areas.”

The war, ongoing for six years now, has turned Syria into separate patches of land, each controlled by a warring party, the Assad regime, the Kurdish People’s Protection Units (YPG), the Islamic State (IS), factions of the Free Syrian Army (FSA) and Jabhat Fatah al-Sham, formerly known as Jabhat al-Nusra.

Noor Burhan, program manager at the Center for Civil Society Development and director of “I am She Network,” said, “The safe zones are only temporary and not well defined. We have been keen on establishing such zones, but following the control of all these extremist groups we fear to return to Syria.”

She added, “The stability of these zones is far-fetched since this is linked to the general situation in the entire country, where there is no comprehensive solution or a political transition.”

Gaziantep is home to 300,000 Syrian refugees, mostly from Aleppo. They are leading their lives away from the raging war in their country. Some have opened shops and small businesses, while others are working in small Syrian restaurants and bakeries, which have become widespread, attracting more and more customers, especially since everyone speaks Arabic, making communication easier with the rest of the Syrians in the city.

Samir al-Ali, 26, who graduated from the Faculty of Economics at the University of Aleppo in mid-2012, told his story, including how he managed to flee the city four years ago when he refused to join the regime army or fight along the armed opposition.

Ali and his wife live in Gaziantep, where he works as a waiter in a Syrian restaurant in the city. “Will jobs be available in these safe zones? Will there be social justice? Will these zones be protected by organized forces?” he wondered in an interview with Al-Monitor.

He raised doubts about these possibilities in the safe zones. “I escaped Aleppo so I don’t have to join the army or take up arms. Today, I am not working in my field of expertise, yet I am not considering moving back to Syria while the war is still raging there,” Ali added.

Trump said in the Jan. 26 interview that he will "absolutely do safe zones in Syria."

Mohammed Anwar Majni, 42, a judge who works as a legal adviser of the National Documentation Office offering free documentation services to Syrians in Turkey and in Syria, told Al-Monitor, “International conventions have not addressed the issue of safe zones but the serious human rights violations at the hands of the regime, the crimes against humanity and war crimes. There are no decisions or mechanisms aimed at preventing the daily attacks on Syrians.”

Majni is from Aleppo, where he used to serve as a judge in the court of Afrin in the countryside of Aleppo. He left for Cairo in July 2012, and a year later he moved to Gaziantep.

Majni said that moving to the safe zones is a far-fetched idea for him. “I am from Aleppo. Any other place will not feel as home for me and my family. I will return to Aleppo only after the fall of this totalitarian regime,” he said.

He added that said safe zones will not live up to the demands of Syrians. “Freedom and dignity were the goal behind the eruption of the revolution, but our country is plagued with chaos of arms and international conflict of interests over our land,” he said.

Ruwaida Kanaan, 36, said she is planning on leaving for France after spending three years in Gaziantep and hopes the war in Syria will come to an end soon.

She works as a broadcaster for Rozana Radio, a Syrian radio station, broadcasting from studios in Gaziantep. She told Al-Monitor, “Operation Euphrates Shield areas, Jarablus, Marea and Azaz are almost safe zones, but I believe that they are under the control of the Turkish army and therefore I cannot live or work there.”

She said of Trump's announcement, “If safe zones are created on the ground, controlled and protected by Syrians, then I will seriously reconsider my decision to travel to Europe, provided these zones are part of Syria, and not part of Turkey.” Syrians living in the Turkish city of Gaziantep fear Trump's initiative to establish safe zones inside Syria would lead to division and a redrawing of the complex map of the zones of influence and confrontation areas in the war-torn country.