In light of an apparent increase in the amount and impact of radioactive contamination in some areas of Iraq, and the inability of the Iraqi government to deal with this matter, Iraq needs international financial and technical support to deal with pollution caused by the remnants of war. 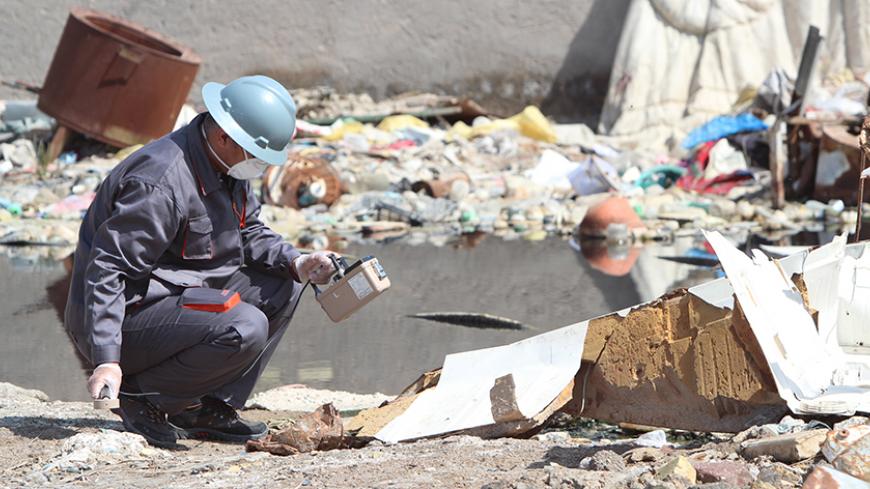 A member of a counter-radiation team uses a Geiger counter to search for missing radioactive material in Basra, Iraq, Feb. 21, 2016. - REUTERS/Essam Al-Sudani

Radiation levels in parts of Iraq — including the heavily populated capital — are an environmental disaster that must be investigated and remedied, parliament member Hassan Salem and his Iraqi National Alliance electoral coalition maintain.

The level of contamination actually rises at times as more radioactive remnants of war are uncovered. Children, unaware but fascinated, find and play with irradiated leftovers, such as abandoned vehicles and military equipment. ​Scrap metal dealers, some of whom are children, contribute to the spread of contamination, and unsuspecting factory workers actually burn contaminated bricks in furnaces for fuel.

According to Salem, this explains how radiation levels reached 62% above the "normal" reading in the Kasra wa Atash district, near Sadr City in northeast Baghdad.

Salem told Badr News earlier this month, "The citizens [of Sadr City] filed numerous complaints, but the Ministry of Health and Environment did not respond to them."

On Jan. 28, the electoral coalition demanded that reports of radioactive contaminants be examined. This issue of contamination has been repeatedly raised since wars ignited in Iraq in the 1980s, followed by the Persian Gulf War from 1990 to 1991 and the US invasion in 2003.

Researcher Kazem al-Mikdadi, the head of the environmental department at Arab Open Academy in Denmark, told Al-Monitor, "Iraqis have been exposed to the high risks of radioactive contamination — most notably from uranium — for more than 20 years, and no serious measurement has been taken by any government so far."

According to Jan. 26 media reports, 1,000 families are breathing air contaminated with radiation in Sadr City. Dr. Ali al-Taie, a resident of the city, told Al-Monitor, “[Diseases] due to radioactive contamination date back a long time, given the abandoned military equipment, remnants of wars and military industries under the rule of Saddam Hussein. Yet the relevant authorities were never interested enough” to take action.

Jawad al-Shammari, the media director at the Office of the Iraqi High Commission for Human Rights in Baghdad, said in a Jan. 29 news conference, "A team was dispatched to determine whether or not there is carcinogenic radiation in Baghdad’s Sadr City.” He later told Al-Monitor that, just for Sadr City alone, it would take $42,000 to collect radioactive waste and move it to a remote area. The waste is mostly from abandoned military equipment, he said.

Shammari added, “By virtue of the duty to protect [all] citizens’ right to live in a safe environment, the High Commission [then] called for a field survey in all parts of Iraq to detect contamination and dispose of radioactive sources in landfills.” The government has yet to respond to that request, he said.

Parliament member Adel Rashash al-Mansouri, who represents Basra province in southern Iraq, told Al-Monitor that of all cancer deaths in his province, radiation contamination is responsible for 75%.

Speaking to Al-Monitor about pollution in combat areas and leftover radioactive military equipment, Ministry of Environment Undersecretary Jassim Abdul Aziz Hamadi al-Falahi said the situation is under control. He added, “These areas are classified and isolated, and most of them are monitored by the International Atomic Energy Agency.”

Falahi noted, “The Iraqi state is not standing idle, as several specialized bodies are monitoring radioactive contamination rates and the surface area of contaminated sites, including the Iraq Radioactive Sources Regulatory Authority, the Radiation Protection Center and the Radioactive Waste Treatment and Management Directorate affiliated with the Ministry of Science and Technology.”

He added, “Contaminated sites were divided into two parts. The first [kind] is related to the rubble and remnants of the war and is under periodic monitoring by the International Atomic Energy Agency and subject to its standards. The second includes the sites where depleted uranium bombs were used and [those are] under the supervision of the Radiation Protection Center.”

As part of Iraq's effort to determine and address the causes of radioactive contamination, the University of Babylon conducted an academic study, which was published in January, that revealed the existence of radioactive contamination in the soil of many areas in Babylon province in central Iraq, just south of Baghdad, including a textile factory, the Musayyib and Alexandria utility plants, an automotive company and Hattin industrial facility. Babylon is where Saddam's regime established numerous military manufacturing plants.

Baghdad itself, however, is not part of that contaminated area, according to researcher Mohamed Hassan Hamza. "The level of contamination is clear in the area between Baghdad and the province of Babylon," he told Al-Monitor.

Hani al-Oqabi, a member of the parliamentary Health Committee, also challenged the impact of radioactive contamination and its negative outcomes. He told Al-Monitor, “Contaminated areas are limited and monitored and are concentrated in the western and southern regions. Other than that, what is published in the media is mere exaggeration.”

He added, “There is no indication of an increase in cancer rates in Iraq."

Many experts, however, beg to differ.

According to a 2006 Associated Press story, the United Nations in 2005 identified more than 300 polluted sites in Iraq and estimated it would take years and at least $40 million to clean them up — if an international effort ever begins.

In light of the spreading problem of radioactive materials in some areas — and the denial of this by some officials — it seems necessary to demand transparency and resort to global expertise for detection and treatment, as citizens' confidence is shaken in the absence of accurate statistics on this phenomenon.