Iraq seeks to clamp down on gun ownership

Regulating private security companies and proposing laws for possession of weapons are part of Iraq’s new strategy to impose order and the rule of law. 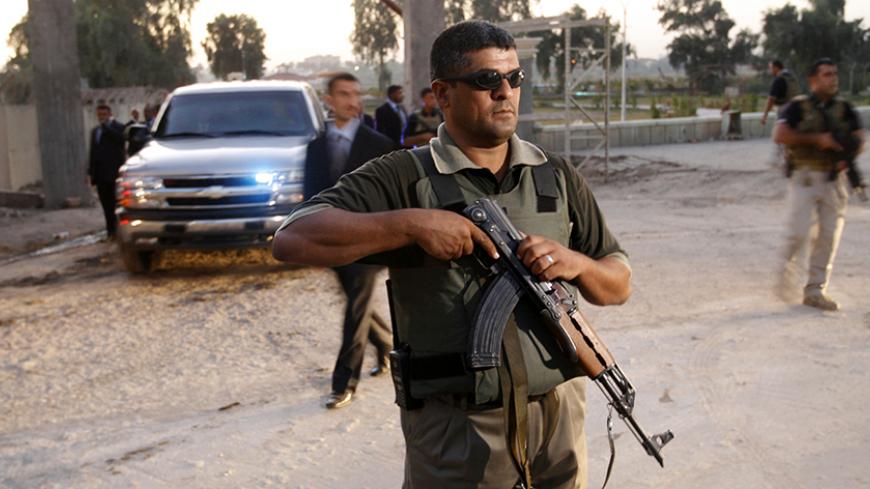 BAGHDAD — Iraq is working to regulate the activities of private security companies and rein in the chaotic circulation and use of weapons.

On Feb. 21, a group of armed tribesmen shot at an Iraqi comedian’s house in Baghdad after he criticized some tribal values in his TV show, "Walayat al-Battikh." Another example of the security chaos is the firing of Katyusha rockets into Baghdad’s Green Zone on Feb. 12, following bloody demonstrations in the capital.

Also, the parliament’s Security and Defense Committee said Jan. 27 that some security companies operating in Iraq were out of control.

“Many foreign companies operating in Iraq are either outside the law or regulated by outdated laws that are not suitable for the current situation,” the parliamentary Security and Defense Committee reported.

Committee member Ibtisam al-Hilali told Al-Monitor, “Security firms across the country are not subject to state laws or regulations in many of their operations, meaning they are beyond the control of the official security services.”

She said that the new bill would impose strict conditions on security companies, forcing them to comply with Interior Ministry regulations and systems.

“Previously, their work, along with gun licensing and weapons store regulations, was the portfolio of regional governors, but the new law centralizes all these powers in the hands of the interior minister,” Hilali said. “The large number of security companies in the country require a new law that covers the companies guarding the US Embassy in Baghdad and other embassies.”

Hilali did not give a precise number of security companies operating in the country. “I don’t think such statistics exist,” she said.

Committee Chair Hakim al-Zamili said in October that some 700 local and foreign security companies were operating in Basra province alone, employing some 75,000 foreign operatives, with 17,000 weapons of various types and some 65,000 vehicles.

On Jan. 28, the committee confirmed that “the company charged with protecting the US Embassy will come under the new law, as will branches of foreign security firms deployed at the embassies of other countries.”

Foreign security companies started working in Iraq after 2003 to protect foreign companies, VIPs, diplomatic missions and sensitive installations, as well as to carry out dangerous tasks such as mine clearance. On Feb. 11, two private security experts were wounded in southern Ramadi when a bomb exploded as they attempted to defuse it.

Private security firms have been accused of violations in Iraq. In April 2016, Israeli TV channel i24 reported that between 2005 and 2015, a British security firm had hired child soldiers from Sierra Leone to guard American military bases in Iraq.

The new security companies law was issued to regulate the work of private security firms protecting individuals and companies. Previously, these firms were regulated under a memorandum issued by the now-obsolete Coalition Provisional Authority in 2004, but the memorandum lacked clear rules laying out procedures and conditions under which these companies would work. The new bill aims to address these shortcomings as well.

The law also regulates the establishment and licensing of Iraqi security firms, as suggested by the Interior Ministry and approved by the National Security Council. Foreign security companies are allowed to operate in cases of extreme need, as agreed to by the Cabinet upon the suggestion of the interior minister.

The law establishes a Directorate for Private Security Company Affairs, a new branch of the Interior Ministry, which will be responsible for registering and licensing companies.

Abdulaziz Hassan, a member of the Security and Defense Committee, told Al-Monitor, “The bill on weapons gives the Popular Mobilization Units [PMU] wide-ranging permission to carry and use weapons to fight terrorism. Once the war is over, the general command of the armed forces will be in charge of deciding whether its members keep their weapons or are disarmed.”

He said, “The security firms law puts those firms’ activities under state control, and they will not be able to begin work until they have received permission from the security and intelligence services. They will also be given orders in coordination with the commanders of government and police operations — previous experience has shown that some companies do not comply with the Iraqi law.”

He noted the weapons possession law would “disarm individuals and armed groups that are trying to impose their authority by force, as well as guarantee official units of the PMU a role in the future — even after [the Islamic State] is defeated — because it licenses them to keep their weapons in a totally legal way, as with the army and other security services.”

Passing laws to regulate security firms and the possession and use of weapons is an important step toward strengthening the rule of law and the state after a decade of deteriorating security in Iraq. It will help Iraqi citizens feel that both government and private security personnel are subject to the law, rather than above it, and that they are equal in rights and duties with every other citizen.