The Palestinian Animal League opened the first vegan cafeteria at Al-Quds University in the hope of raising awareness about animal welfare and providing healthy food options to the community. 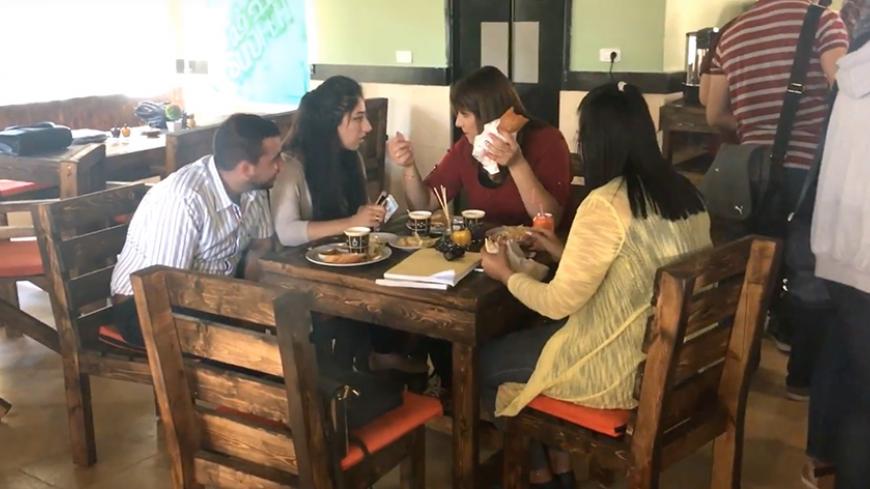 Customers are seen eating at Palestine's first vegan cafeteria, Sudfeh, on the campus of Al-Quds University, Abu Dis, the West Bank, in this still from a video uploaded on Oct. 24, 2016. - YouTube/Pal Solidarity

RAMALLAH, West Bank — Twenty-two students at Al-Quds University in Abu Dis, bordering Jerusalem from the east, try to find the time between lectures to volunteer between 8 a.m. and 4 p.m. at Sudfeh (Arabic for Serendipity), the first vegan cafeteria in Palestine, located on the university campus.

On Oct. 24, Al-Quds University and the Palestinian Animal League (PAL) opened Sudfeh, which provides meals without any animal products, to promote the values and ethics of animal welfare and encourage veganism among students.

The Youth for Change program — launched in March 2015 by PAL at Birzeit University, Bethlehem University and Al-Quds University — came up with the idea for the cafeteria. The main objective of the program is to provide students with the necessary qualifications to carry an ethical message of animal welfare and social responsibility. Those students would then teach their peers what they learned during the six-month program. Following this, each group of students would come up with a social initiative.

Sameh Erekat, a PAL member and supervisor at Sudfeh, told Al-Monitor that the vegan cafeteria was one of those initiatives presented by 14-year-old schoolgirls from al-Awael School in Ramallah.

Erekat said, “PAL submitted the proposal before the administration of Al-Quds University, which loved the idea and supported it by providing a rent-free space on the campus, providing that 50% of the profits from Sudfeh is used to establish a scholarship fund to support struggling students, and the other 50% to support PAL’s programs and activities at Palestinian schools.”

According to Erekat, on Aug. 1, PAL led an international online campaign to promote Sudfeh and raise the money needed to open it, estimated at 10,000 British pounds ($12,400). The campaign collected 10,905 pounds (roughly $13,500) from friends of PAL and other donors, most of whom live outside Palestine and whose names were listed on the crowdfunding page.

He explained that the cafeteria was designed to provide cheap, healthy and fresh meals, sold at prices ranging from $3 to $6, for around 13,000 students at Al-Quds University, in addition to the faculty, staff and administration, as well as local and international visitors.

Speaking about this initiative’s objective, Erekat noted, “The cafeteria’s goal is to encourage students to eat healthy food, namely vegetables and legumes grown in fields. Sudfeh also aims at promoting animal welfare and urging people to avoid eating meat,” as well as spreading the culture of veganism that is almost nonexistent in Palestine.

Sudfeh offers a wide diversity of meals, such as hummus, beans, thyme and spinach pastries, vegetable and legume soups, and popular Palestinian dishes such as stuffed grape leaves, rice and lentils, as well as many meat-free dishes.

Sudfeh employs three paid staff members and 22 students volunteer their time to serve around 150 students and staff members every day, making between 1,500 and 2,000 shekels ($400-$540) in daily profits.

Chairman of Al-Quds University Imad Abu Kishek told Al-Monitor that the university has shown interest in the vegan cafeteria and provided support because it believes in the need to encourage such youth initiative. He said, “The university supports the initiative in order for us to become part of the global humane system and promote animal welfare, compassion and humanity.”

He added, “Sudfeh has received broad acclaim within the university, as part of our approach to encourage healthy eating, which benefits human health.”

PAL plans on opening another branch in Ramallah to further spread the idea among citizens. The organization is willing to open branches in all areas providing support is provided, especially a rent-free location.

PAL, established in 2011 by Ahmad Safi and Erekat, is the only nonprofit organization in Palestine working in animal protection. It offers several services in terms of providing veterinary care, improving animal care and welfare, organizing educational activities and raising awareness among locals and children in particular. PAL’s objective is to find solutions for animal-related issues and lead educational and awareness programs to promote a vegan diet, as well as develop effective strategies to address the main obstacle facing animal welfare in the region.

The organization is currently working on three programs: The first is the Street Dogs program in Tulkarm, launched in August 2015. Here, PAL rescued over 1,100 stray dogs from the city and the neighboring villages and neutered them.

The second is the Horse and Donkey Welfare program, also launched in August 2015, for which PAL coordinated with The Brooke, a leading animal welfare association. The aim of this program was to complete a comprehensive assessment of the situation of these animals (horses and donkeys) in the West Bank and to develop new strategies to help find suitable solutions to improve the life of these working animals.

The third is the Youth Education and Empowerment program, launched under the Youth for Change program, which PAL believes has been achieving great results in terms of educating youth about animal welfare since August 2015.

In this context, PAL’s Executive Director Ahmad Safi told Al-Monitor, “PAL is considering the possibility of opening several Sudfeh branches in different Palestinian cities to promote vegan, cruelty-free food, as well as popular Palestinian dishes made of fresh vegetables and grains that are purchased from Palestinian farms.”

However, PAL’s programs currently lack funding, and the organization is counting on the profits from Sudfeh to cover the cost of its programs in Palestinian schools. But the cafeteria is yet to make enough profit to cover these expenses.

Four months into the project, PAL members supervising Sudfeh believe the idea for the vegan cafeteria has succeeded. But to gain popularity in the Palestinian street, it requires more time and additional resources. Meanwhile, PAL is determined to make a change among the younger generations by piloting new programs and activities in Palestinian schools and universities.