Israeli progressives fear that the spirit of the new US administration not only will encourage settlement construction, but threaten liberal values and tolerance within Israeli society. 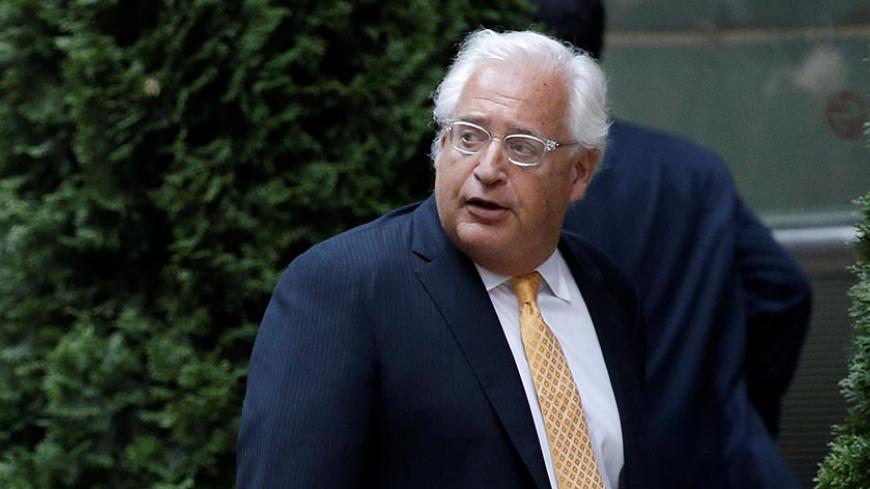 President Donald Trump's pick for US ambassador to Israel, David Friedman, arrives at a private fundraiser for then-candidate Trump in the Manhattan borough of New York City, June 21, 2016. - REUTERS/Mike Segar

"It is the fulfillment of a nightmare," says Yehudit Oppenheimer, describing the lethal combination of the US administration and Israel's right-wing government. Oppenheimer is the director general of Ir Amim (City of Nations), a nonprofit group that promotes equality and coexistence among Jerusalem's diverse communities. As someone identified with Israel's political left, she believes that the election of Donald Trump has shredded the rules of the game.

While settlers are celebrating the rise of the new president as a miracle, feelings among the Israeli left range from chronic stress to sheer terror. Now they are busy trying to find ways to stay positive, and so far they have not been particularly successful.

One thing that worries Oppenheimer in particular is David Friedman officially taking office as US ambassador to Israel. Friedman, an Orthodox Jew who wears a yarmulke, has close ties to the settler movement and serves as chairman of the US branch of Friends of Beit El. When his appointment was announced, he declared that he looks forward to working "from the US Embassy in Israel's eternal capital, Jerusalem."

Even if the US Embassy is not moved from Tel Aviv, Friedman can still cause enormous damage, at least as far as progressive groups are concerned. The ambassador-designate owns a home in Talbieh, a posh neighborhood of Jerusalem within walking distance from the residence of Israel's president, and has already announced that he plans to live there while serving as ambassador.

"No one can tell him where to live," says Oppenheimer. "What concerns me is that when the US ambassador lives in Jerusalem, it becomes a symbolic statement." She believes that Friedman will "most certainly be very demonstrative about doing this and turn his home in Jerusalem into the official ambassadorial residence, with all that this implies."

A position paper released by Ir Amim on Jan. 20 focuses on ways to deal with the implications of Trump's electoral victory. It says, among other things, "Moving the American embassy in Israel to Jerusalem in the current circumstances, in which there is both political stagnation and daily tension on the streets of the city, is incompatible with this vision. It is a dangerous unilateral move which violates international law and negates the essence of Jerusalem as the capital of two peoples.”

As cutting as this warning is, it was sent off into a political and diplomatic environment in which the settlers and the right set the agenda, as can be seen in last week's passing of the Regularization Law. The left realizes that the new law, which legalizes the seizure of private Palestinian land in the West Bank to establish Jewish settlements, marks just the beginning of the Trump-Netanyahu era.

Oppenheimer says, "We felt this sense of urgency earlier. It is not as if everything here was so wonderful until Trump was elected. We could feel the distress before that too. What is different now is that it is clear that the rules of the game have changed. What worries me most is the lack of inhibitions shared by the US administration and us. We are in the era where politics is constructed by images and emotions. [Former President] Barack Obama represented a humanistic liberal ideal, while everything here [now] is so capricious."

This sense of emergency among leftist organizations has already manifested itself in fundraising. Having served until recently as the deputy director of the Association for Civil Rights in Israel, Tali Nir believes that these groups are already suffering financially and this development will greatly impact their activities. In a conversation with Al-Monitor, she explains, "Most of the donations to promote social change come from liberal Jews in the United States. Now that they feel like their own house is on fire and they have to save it, so many of these American Jews are diverting their donations from Israel to groups at home. What this means for us is that fewer donations are making their way here. The significance of this should be obvious."

Nir says that another concern is that financial aid from the US government, which has supported initiatives in education, the arts, science and democracy both internationally and in Israel, could certainly come to an abrupt halt. Like Oppenheimer, Nir uses dire terms to describe the current feeling in leftist and human rights groups. "Plenty of people are in a panic, fearing that the liberal state itself is at risk. I feel the anxiety too, of course."

She adds, "The jubilation among the right-wing settlers now that the American government's restraints have been removed is an indication of how correct we were to fear that unilateral measures in the occupied territories will lead to infringements of human rights on both sides. It is not at all inconceivable that these measure will lead to another round of violence."

It is more than the lifting of restraints in the settlements that leaves Nir worried. She is especially concerned about a chain reaction that could result in deep and radical changes to Israeli society itself. She contends that the Trump administration "threatens civic-minded groups by disparaging and acting against everything they stand for." She says, "It feels like this is the end of liberal democracy. The fear is that Trump will attack civil and human rights, that he will legitimize attacks on minorities and women, intensify social divisions and in the most extreme scenario, cause bloody wars to erupt. In short, there will be a significant retreat from the rules of the democratic game."

Self-confidence among the right is sky high as it prepares to use the Trump administration as a lever to achieve gains like the annexation of large swaths of the West Bank in efforts already supported by well-funded campaigns. Money seems to be pouring in to groups that support these objectives. Meanwhile, the left is trying to reorganize and prepare for the next few years.

Oppenheimer says, "We will have to find mechanisms of resistance from within, since we no longer have an American administration that will restrain [the Israeli] government. We are exposed, which means that we must rely on ourselves and act even though the Israeli public has been anesthetized. We know how to preserve what distinguishes us, but will now have to find a common language with many other factors."