Could Iran’s next president be former TV boss?

The former head of the Iranian state broadcaster, Ezzatollah Zarghami, is increasingly being touted as a potential Principlist candidate in the May presidential elections. 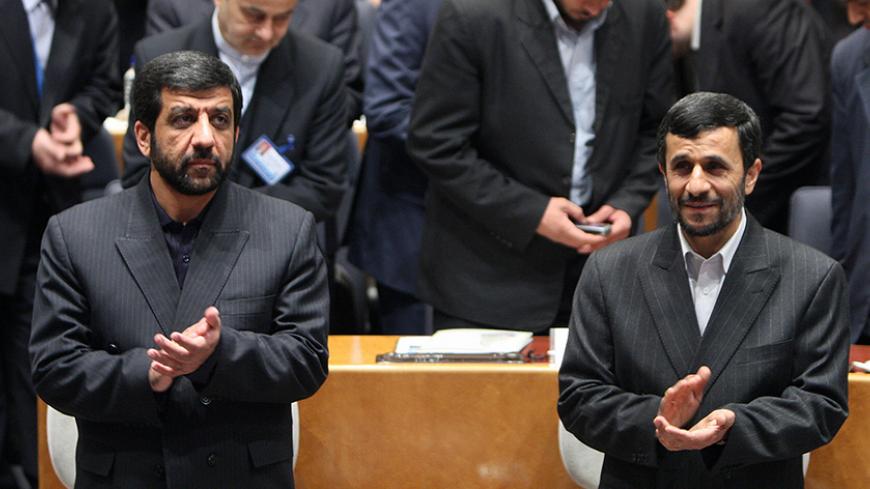 With the Iranian presidential elections in May, rivals of incumbent Hassan Rouhani continue to assess possible candidates. In recent weeks and months, one new name has repeatedly surfaced in the Iranian media: Ezzatollah Zarghami.

The former director of the Islamic Republic of Iran Broadcasting (IRIB) holds a bachelor's degree in civil engineering and a master's degree in industrial management. Born in 1959, Zarghami was appointed by Supreme Leader Ayatollah Ali Khamenei and headed the state broadcaster from June 2004 until November 2014. Zarghami, who was a member of the Muslim Student Followers of the Imam's Line, was involved in the 1979 takeover of the US Embassy in Tehran. In an interview with Fars News Agency on Nov. 3, 2015, Zarghami spoke in detail about his involvement in the takeover. Having joined the Islamic Revolutionary Guard Corps (IRGC) during the 1980-88 Iran-Iraq War, he also spoke about his experiences during the bloody conflict, saying, “An important portion of my time in the IRGC was spent working in the military industry and producing military rockets needed on the front. The factory groups of Martyr Hasan Bagheri, which were launched from scratch, are today an important asset for the military industry of the country.”

After his time in the IRGC, Zarghami joined the Ministry of Culture and Islamic Guidance and later the IRIB. He has also served as senior adviser to the minister of culture and Islamic guidance, deputy for the provincial and parliamentary relations of the Culture Ministry, member of the IRIB Supreme Council of Policymaking and deputy defense minister.

Under his leadership of the state broadcaster, the IRIB greatly expanded, adding more TV and radio stations, including foreign-language stations such as the English-language PressTV and the Spanish-language HispanTV news networks. Yet, the IRIB’s viewership during this time actually decreased as more and more people started watching outlawed satellite TV channels.

Zarghami has not been without controversy. In March 2012, he and 16 other Iranian officials were placed on the European Union's sanctions list. The EU explained his inclusion on the blacklist as motivated by what it referred to as Zarghami being involved in “gross human rights violations” related to coverage of the disputed 2009 presidential elections. The targeted officials, including Zarghami, faced the freezing of any assets in the EU and were barred from entering EU member states.

In this vein, in an interview with Chelcheragh magazine published right after the 2013 presidential elections, Rouhani criticized Zarghami’s approach of running the IRIB, saying, “A sizable portion of our young population have boycotted IRIB since they have not found it honest and moral, as it should be. The media must address people’s needs and one of their most important needs is to have access to transparent news and information. When there is more [coverage] about foreign affairs than domestic affairs, when there is a program covering the birth of a panda bear in a zoo in China but no coverage of the workers protesting against late payments [of salaries], it is natural that people form a negative opinion of IRIB.”

After the end of his term as the head of the state broadcaster, Zarghami did not take on another official role and instead, as he has said himself, has spent his time on the internet and especially Instagram. In an interview with Tasnim News Agency in November 2015, he said, “After [stepping down from] IRIB, different organizations invited me to cooperate with them but I rejected all of them, because I preferred to show that I am not pursuing official positions.”

As such, Zarghami has implicitly denied that he wants to run in the upcoming presidential elections. Indeed, in an interview with Tasnim News Oct. 4, Zarghami said, “For now, I have no plans to become a candidate in the 2017 presidential elections and instead believe that my duty — at this point in time — is to support and strengthen the revolutionary forces.”

However, it is common practice in Iranian politics for politicians not to disclose their true intentions about whether to run in elections until the very last moment. As such, he has in recent months been consistently referred to in Iranian media as a possible Principlist candidate.

Although Zarghami has denied the possibility of his own candidacy, he has behaved in a way that can be interpreted as preparing for the elections. In September, this led Rouhani’s cultural adviser, Hesamodin Ashna, to write on Twitter, “A friendly piece of advice for Mr. Zarghami: It is better for you to wait another four years — it won’t be too late.”

Active on Instagram and often publishing political posts, Zarghami reminded Rouhani Dec. 24 that while the incumbent had it easy in the 2013 presidential elections, as he was the attacker, it is going to be much harder for him this time around since he is now the defender of his position.

Mehdi Rahimi, a political editor of Mehr News Agency, one of the major Principlist media outlets, thinks there is a good chance of Zarghami becoming a candidate. Speaking to Al-Monitor, he said, “Although it is still a little too early to confirm anything, Mr. Zarghami has the potential to unify the entire Principlist movement.”

However, far from all agree with this assessment. In an interview with Al-Monitor, Principlist political activist and secretary-general of the Iran Green Party, Hossein Kanani Moghaddam, said, “More than being a political figure, Mr. Zarghami is a cultural and media figure and we cannot be sure whether he really is a Principlist. Although he is not connected to the radical movement known as the Endurance Front, there are still doubts about him being a Principlist.”

In this vein, Kanani Moghaddam said, “More importantly, it is possible that those who are bringing up his name are more interested in conducting a political maneuver than investing in a real potential [candidate]. In any case, the complex Principlist puzzle to find an alternative to Rouhani has yet to be solved and possible potential candidates include [Tehran Mayor Mohammad Bagher] Ghalibaf and [former nuclear negotiator Saeed] Jalili — both of whom were defeated by Rouhani [in the 2013 elections] — and new faces who are waiting for their turn as well as other already well-known political figures.”