A glimmer of hope for Egypt's Syrian refugee children

An Egyptian NGO in 6th of October City is making efforts to prevent Syrian children from dropping out of school. 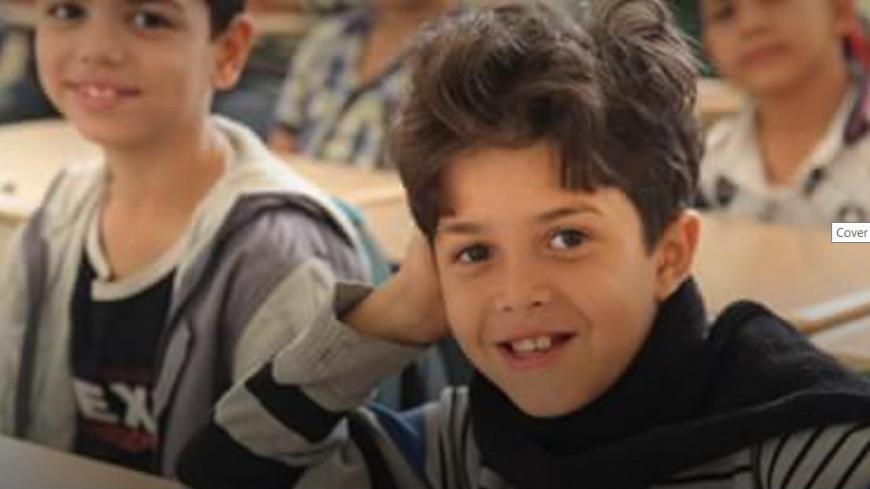 The Fard Foundation has opened an educational center for Syrian students in 6th of October City in Egypt; this photo was posted on the foundation's Facebook page Nov. 20. - Fard Foundation/Facebook

Behind the green-colored gate of the educational center, dozens of children play and run in the vast courtyard. They laugh, shout and talk as teachers look on. Then the bell rings, and the tiny children line up and start heading to their classrooms.

This is an educational center run by the Egyptian nonprofit Fard Foundation, which tries to help Egypt's Syrian refugees return to school. It is in 6th of October City, some 32 kilometers (20 miles) outside Cairo. This city houses thousands of Syrians, some of whom also own shops there. It is called Little Damascus due to the huge influx of Syrians.

"I left my school in Damascus four years ago. When I came to Egypt with my family, I didn't know anyone, or any place. I felt that I was a stranger," Hashem, 14, told Al-Monitor. "I joined this center last year. I feel that I am at home. I like the teachers and my friends so much. Here I am studying computers and learning French and English as well."

Before settling in 6th of October City, Hashem spent months in some Egyptian coastal cities. But at this educational center, he feels more comfortable as all the teachers and his fellow students are Syrians. This makes it easier for him to communicate and even to dream of his future.

"I want to be a computer engineer or an architect," he said.

According to the United Nations High Commissioner for Refugees (UNHCR), the number of registered Syrian refugees in Egypt was 117,591 as of Jan. 31.

Since the war in Syria started, Syrians have not been required to have entry visas or residency papers to stay in Egypt. They are treated like Egyptian nationals when it comes to free access to public education and health care.

Unlike in some of their neighboring countries, Syrians in Egypt are living in urban areas, such as 6th of October City, renting and sharing accommodations.

"My children enrolled in Egyptian public schools, but the large number of students in the classrooms and also the different dialect make the children feel alienated," Rana Rohaiban, a Syrian teacher at the center, told Al-Monitor.

She said that there are a number of educational centers for Syrians in Egypt run by nongovernmental organizations, but that this one is unique and makes students feel more at ease.

"The tuition fees are cheap compared with other centers. Also, it provides free transportation for both the teachers and pupils who use the center's buses."

The Fard Foundation was established in 2012 by three Egyptian women: Rasha Maati, Heba Mourad and Eman el-Kholy. Before establishing the foundation, they had no idea how to run an NGO. But their common interest in helping Syrian refugees encouraged them to do so.

"When the Syrian refugee numbers increased, we felt a responsibility to help them," Maati, a resident of 6th of October City, told Al-Monitor.

Before establishing the foundation, the three women worked separately with a number of volunteers offering clothes, blankets and food that came from Egyptian community donations. But Maati thought that was not enough and that they should do more.

"I visited the Syrians at their homes in 6th of October City. I talked with them to find out their needs. These visits helped me to collect the first written data about them," she said.

Then Maati contacted the other two co-founders and together they launched the Fard Foundation with the participation of dozens of volunteers and social workers. The word Fard in this case means individual.

The Fard Foundation has helped 13,500 Syrians and employs over 220 Syrians.

The idea of establishing its educational center started when the foundation's social workers found out that 20,000 of 60,000 school-age children who are registered with the UNHCR were not registered with the Education Ministry, which meant they were not getting schooling.

"We conducted a cellphone survey with about 2,000 Syrian families whom we had collected data from to ask why their children had dropped out of school. Some said their children had to work to feed the family, others said they feared their girls would be harassed and some said the schools were far from their homes," Maati said.

As a result, she said, the Fard Foundation made the first statistical study on the children's dropout rate and found that in 2016 about 21% of school-age children had left school. Most were males between 13 and 16 who were working in factories or as barbers and smiths.

"Thus we started to collect donations for building an educational center to receive those children. It was mainly built with Egyptian donations," Maati said. "So far, about 880 Syrian children are enrolled in the center for primary and secondary education."

The children are supposed to attend a day every week at an Egyptian government school, and spend the rest of the week at the center, where they study the Egyptian Education Ministry's curricula. The children should pass the midyear and final exams at the Egyptian schools for obtaining their accreditation at the end of the year.

"There are 96 Syrian teachers working in the center," she said, adding that there are many activities at the center, including soccer and gym.

"We want to create the same atmosphere for those children as they used to experience in Syria. We want to help them recover what they have seen because of the war, which hopefully will not badly affect their future," Maati said.