The Turkish city of Izmir has become the latest target in a spate of terror attacks. 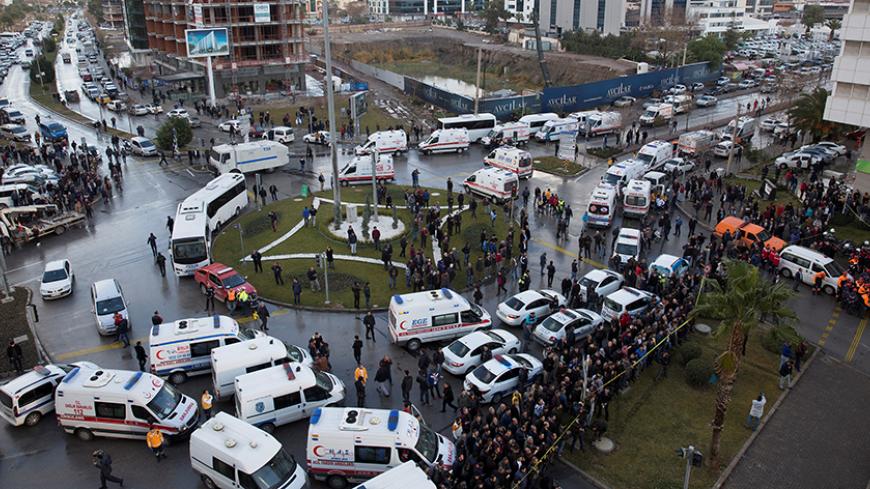 Ambulances arrive at the scene after an explosion outside a courthouse in Izmir, Turkey, Jan. 5, 2017. - REUTERS/Tuncay Dersinlioglu

Turkey continues to be the target of terrorist violence. Today its third-largest city, Izmir, was rocked by the crackle of gunfire and explosions in the late afternoon. Early reports suggest that the blast was caused by a car bomb that was detonated outside a courthouse in the port city’s Bayrakli area.

Two alleged assailants were killed in the ensuing gun battle with police. Another was said to have fled the scene. One policeman and a court employee were reported to have been killed and at least 10 others wounded in the attack.

The identities of the assailants remained undisclosed as of the time of writing. Footage of their bloodied corpses was circulated on social media.

Possible suspects include a left-wing terror faction called the People’s Liberation Party-Front, which frequently targets the police. The incident also bears the hallmarks of the Kurdistan Freedom Falcons (TAK), the urban terror wing of the Kurdistan Workers Party, which has carried out a string of car bomb attacks in Ankara and Istanbul. Izmir Governor Errol Ayyildiz has reportedly identified the latter as the prime suspects.

At least 400 people have died in the past year in separate attacks carried out across Turkey, mainly by TAK and the Islamic State.

Meanwhile, the manhunt for the perpetrator of the New Year’s Eve massacre at the Reina nightclub in Istanbul is ongoing, with police now saying the shooter who killed 39 revelers may be an ethnic Uighur from China. Deputy Prime Minister Veysi Kaynak described the man as a “specially trained” member of a terror cell who carried out the attack alone. Kaynak acknowledged that he may have slipped out of the country. The authorities have yet to identify the suspect by name.

IS has claimed responsibility for the attack, saying it was in retaliation for Turkey’s ongoing military campaign to oust the group from its strongholds in northern Syria. Turkey has cleared its borders of IS and captured the Syrian towns of Jarablus, al-Rai and Dabiq further south.

Turkish forces and their Syrian rebel proxies are currently focusing on the town of al-Bab, where the jihadis are putting up fierce resistance. But in recent days, senior IS commanders have reportedly been leaving the town and redeploying to Raqqa.

Not that the US-led coalition has been of any help, Turkish officials complain. Ankara charges the US-led coalition has spurned Ankara’s repeated demands for air support in the al-Bab operation. Presidential spokesman Ibrahim Kalin told pro-government broadcaster Kanal 24 today, “In the past month and a half, we have observed and understood that this [coalition] support was not given at the sufficient level and effectiveness.”

Coalition officials retort that Turkey embarked on its operation unilaterally, without gathering proper intelligence and that it is paying the price of its “totally reckless gambit,” as one coalition official put it in comments to Al-Monitor on condition of anonymity. Kalin said the United States' “excuses are unacceptable,” but added that there is no need for a “rushed evaluation” on the Incirlik Air Base.

Turkish Defense Minister Fikri Isik hinted earlier that Turkey might rescind US access to the base, which is critical to the coalition's air campaign against the jihadis.