Trump’s Middle East fans get caught up in global blowback

Political leaders from Israel to Saudi Arabia are quickly finding out that siding with Trump comes at a price. 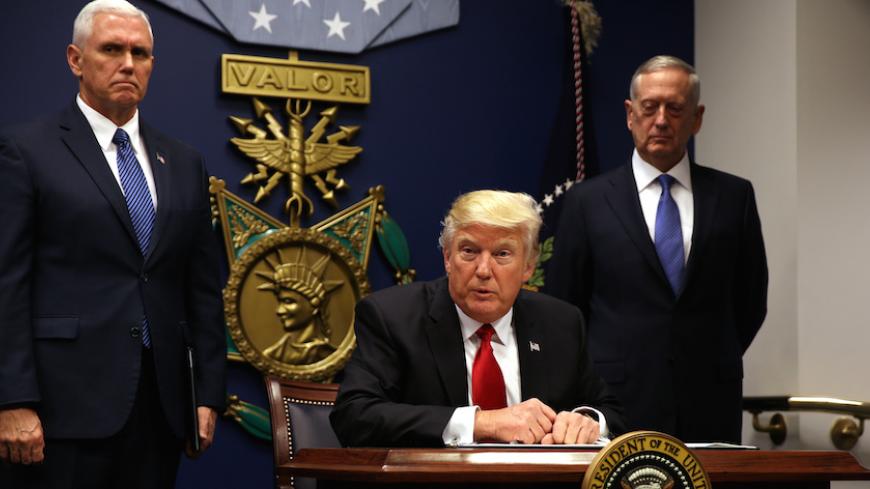 US President Donald Trump signs an executive order to impose tighter vetting of travelers entering the United States, at the Pentagon in Washington, Jan. 27, 2017. - REUTERS/Carlos Barria

Middle East leaders who just days ago were cheering the inauguration of someone who appeared to share their worldview are getting rattled by the worldwide blowback against Donald Trump’s hard-edged policies.

Top officials from Israel to Saudi Arabia more or less openly welcomed the departure of Barack Obama, who they saw as too accommodating toward Iran and too friendly to revolutionaries upending the region. Their warm embrace of Trump, however, is creating its own set of problems amid an unprecedented global backlash against the new president just 10 days into his administration.

Israeli Prime Minister Benjamin Netanyahu was one of the first foreign leaders to get stung for too closely identifying with the new White House occupant. In a tweet published Saturday evening ahead of his Feb. 15 meeting with Trump, Netanyahu voiced support for the US president’s proposed wall with Mexico.

The tweet immediately caused a furor in Mexico, which is home to about 50,000 Jews and has good relations with Israel. Dozens of Mexican Jews canceled donations to the United Israel Appeal campaign, while Mexican Foreign Minister Luis Videgaray asked for an apology.

"It's absolutely incomprehensible that [Israel’s] prime minister should express himself in this way, which frankly we consider an aggression," Videgaray said Jan. 30. "I think an apology … would be appropriate in this case."

Trump’s Israel policy, meanwhile, is of particular concern for several US allies in the region.

Egyptian President Abdel Fattah al-Sisi, the first foreign leader to call Trump to congratulate him for his win in November, is widely believed to have urged Trump to postpone any decision to move the US Embassy from Tel Aviv to Jerusalem when the two talked by phone Jan. 23. And King Abdullah II of Jordan is believed to have shared the same concerns with Vice President Mike Pence when the two met for breakfast Jan. 30.

No policy, however, is causing greater angst for Trump’s putative new friends than his decision to rush through an executive order that bars US entry to citizens from seven majority-Muslim countries for 90 days and bans Syrian refugees indefinitely.

King Salman bin Abdul-Aziz Al Saud of Saudi Arabia discussed the refugee situation over the phone with Trump over the weekend and agreed to support potential safe zones in Syria and Yemen, according to a White House readout. Riyadh has so far remained silent about the ban, but the kingdom is under pressure to stand up for Muslims around the world as the custodian of two of Islam’s holiest sites.

“As a result of this ban, many of those fleeing war and persecution have been adversely and unjustly affected,” the Mecca-based Organization of Islamic Cooperation said in a statement Jan. 30. “Such selective and discriminatory acts will only serve to embolden the radical narratives of extremists and will provide further fuel to the advocates of violence and terrorism.”

And the Saudi-backed government in Yemen, which is battling Houthi rebels and welcomes Trump’s stance against the Houthis’ Iranian patron, also denounced what they call Trump’s “ban.”

"We resent the US ban,” the Yemeni Foreign Ministry said in a statement. “Such decisions support the stance of extremists and sow divisions.”

Even the Iraqi Kurds, many of whom trust Trump to be more supportive than former President Obama of their dreams of independence, are keeping a nervous eye on the developments of the past few days. Like other Iraqis, they are covered by new regulations denying them entry into the United States for 90 days.

In next-door Turkey, President Recep Tayyip Erdogan initially welcomed Trump’s election, inviting the fellow anti-establishment figure to visit “as soon as possible.” Within days of Trump’s inauguration, however, Erdogan was already telling reporters that “some language about the Middle East is reaching our ear, and it is frankly disturbing.”

“Regional issues cannot be solved by closing the doors on people,” Turkish Prime Minister Binali Yildirim said at a press conference with British leader Theresa May on Jan. 28. “You can build a wall. But it’s not a solution. That wall will come down like the Berlin Wall.”