Trump's warm embrace of Netanyahu nothing for Jews to celebrate

While Israeli Prime Minister Benjamin Netanyahu revels over his meeting with US President Donald Trump, US and Australian Jews are uncomfortable with his warm relations with a volatile and anti-Muslim leader. 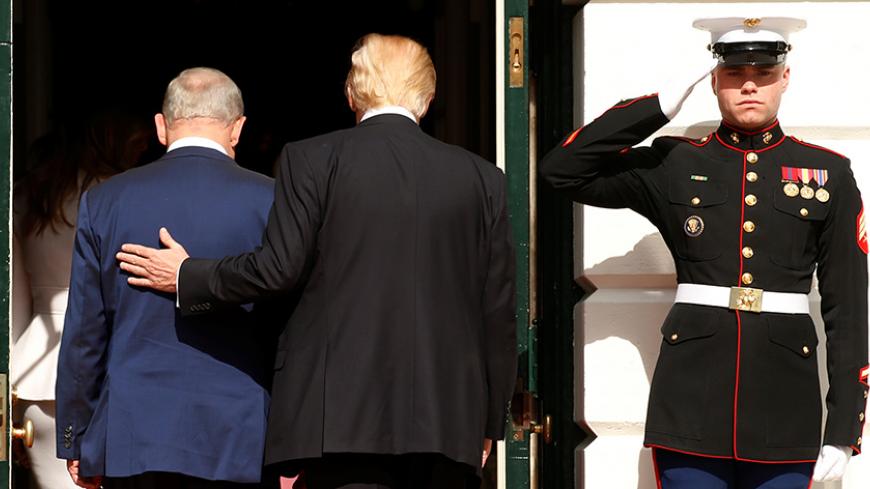 It’s hard to overstate the value of a personal friendship between an Israeli prime minister and an American president to the relationship between the small state and the strongest power in the world. An open door at the White House is of even greater worth when Congress is controlled by the president’s own party. Nowadays, Prime Minister Benjamin Netanyahu will find it more difficult to work against an American president, the way he did in March 2015, when he tried to hinder the Iran nuke deal championed by President Barack Obama by speaking at the US Congress without coordinating it beforehand with the White House.

The importance of the chemistry between the two leaders goes beyond the bilateral arena. When a US president looks out for an Israeli prime minister, Israel is accorded a special status in the international community. Having the ear of an American president is a priceless boon for any small country, and even more so for an occupying power under constant international censure. But this is not the case when the new resident of the White House is perceived by the world as a bumbling greenhorn.

The honeymoons of President Bill Clinton with Israeli Prime Ministers Yitzhak Rabin and Ehud Barak, and George W. Bush with Ariel Sharon and Ehud Olmert, were the golden years of Israeli diplomacy. Israeli envoys around the world were honored guests in the homes of the leaders of their host states. Senior Israeli officials were often asked to help out other countries such as Turkey, Egypt, Jordan and even the former Soviet states, and to advocate for them at the White House. The pro-Israel American Israel Public Affairs Committee was mobilized quite a few times to help countries that Israel wanted to support. Rarely, if ever, did American presidents push Israeli premiers into situations in which US global interests or policy in conflict zones contradicted those of Israel.

The crisis in Israel’s ties with Mexico following Netanyahu’s tweet on Jan. 28 enthusiastically endorsing Trump’s plan to build a wall on its border with the United States showed that walking hand-in-hand with Trump is like strolling through a minefield. That crisis is officially over after President Reuven Rivlin apologized to Mexican President Enrique Pena Nieto. Nonetheless, embracing Trump on such a controversial issue for the American public and in the media did not do much for Israel’s standing in the United States and the world. Luckily, Netanyahu did not rush into lockstep with Trump when Trump veered toward Taiwan, incurring the wrath of Beijing and several days later had to promise Chinese President Xi Jinping that he would honor the traditional American “one China” policy.

Trump’s policy on the Israeli-Palestinian conflict is also tremendously wobbly. First, he floats the idea of one state for Israelis and Palestinians at a Feb. 15 White House news conference with Netanyahu, and the next day his ambassador to the United Nations, Nikki Haley, makes it clear that the administration is adhering to the two-state solution. The intelligence assessments of the Israeli Foreign Ministry, the Mossad and the National Security Council aren’t worth the paper they are printed on to Israeli decision-makers.

Analysts of US policy in other countries are probably faring no better. Normally, Arab and Western leaders formulate their approach to the Israeli-Palestinian conflict in accordance with the position of the United States, and usually in coordination with Washington. That’s the way it was with the vote on UN Security Council Resolution 2334, which rejected any Israeli construction beyond the Green Line and urged negotiations on the two-state solution.

Reactions in the world to the superficial approach of the American president — “So I'm looking at two states and one state, and I like the one that both parties like” — ran the gamut from ridicule to a sense of insult. France, Germany, Russia, China, Australia and even Britain are unwilling to dance to the tune of an American president who changes his diplomatic repertoire like he changes socks. Western states have consistently supported the establishment of a Palestinian state based on the 1967 borders. Israel’s closest friends in world capitals believe that this is the only way to ensure Israel’s existence as a democratic, secure and Jewish state. This is the way it was before Trump moved into the White House, and that’s how it remains after Trump welcomed the Israeli prime minister there earlier this month.

The first visit by an Israeli prime minister to Australia started Feb. 21. How it goes will show just how constricting Trump’s embrace of Netanyahu in Washington is. The first Israeli prime minister to trouble himself to visit the distant continent will doubtless be accorded a spectacular welcome. Nonetheless, a survey conducted by an Australian public research institute owned by Frank Lowy, a Zionist Jew, revealed that Australians don’t regard kinship with Trump as an advantage, despite the two countries' close relations. Though public support in Australia for the ANZUS treaty with the United States has never fallen below 90%, almost half the respondents (45%) polled on the eve of the US elections said that if Trump were elected, Australia would be better off distancing itself from the United States.

Trump’s vulgar attitude toward Australian Prime Minister Malcolm Turnbull in their Jan. 28 telephone conversation regarding the resettlement of refugees and Trump’s freeze on negotiations over the Trans-Pacific Partnership both confirm that the concerns of those polled were well founded.

The idea that one's friends define them will dog Netanyahu in Australia. World Jewry, including the Jews of Australia, are anxiously following the rise of anti-Semitic incidents since Trump emerged in American politics. Jewish communities are increasingly concerned that the tight ties between Trump and Israel will damage the delicate fabric of their relationships with Muslim minorities, the main targets of the new president’s incitement.

The Israeli right believed that Israel was in for a treat at the White House. It is gradually coming to realize that something else entirely is in store for Israel there.