Nouri al-Maliki, the former prime minister who now is one of Iraq’s vice presidents, was faced with demonstrations staged by angry residents of the three southern provinces he was visiting as part of an early effort to increase his chances of returning to power in local and parliamentary elections slated for 2018. 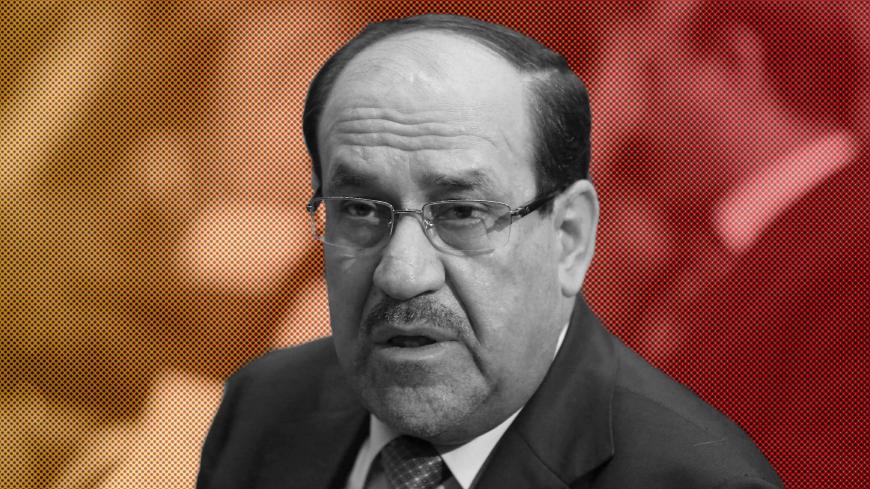 Iraqi Vice President Nouri al-Maliki attends a parliament session in Baghdad, Sept. 8, 2014. The former prime minister has been facing some headwinds in his long-term effort to return to power. - REUTERS/Hadi Mizban

BAGHDAD — On Dec. 26, the leader of the Sadrist movement, Shiite cleric Muqtada al-Sadr, met with Iraqi Prime Minister Haider al-Abadi to discuss the reform project advanced by Sadr over a year ago through popular protests against those accused of corruption. One of those blamed was former Prime Minister Nouri al-Maliki, currently one of Iraq’s vice presidents.

The meeting came after a series of demonstrations against Maliki, who has been visiting Shiite cities in central and southern Iraq. Anti-Maliki demonstrations in the south have revived concerns about Shiite infighting, especially after hundreds of angry protesters from Iraq’s southern province of Basra stormed a meeting in which Maliki was expected to address a group of influential figures, driving the attendees out of the hall. Sadr and his followers were held responsible for mobilizing the protests; Sadr refused to comment about them.

From Dec. 7-11, Maliki faced demonstrations in the south in Maysan, Dhi Qar and Basra provinces during his visits there with top officials. These visits were part of Maliki’s early campaign aimed at increasing his chances in local and parliamentary elections slated for 2018 and rebuilding the popularity he lost after one-third of the country fell in the hands of the Islamic State (IS) in June 2014, when he was still in power.

Maliki was surrounded by a swarm of protesters chanting against him. But the worst incident took place in Basra province, where the former prime minister had to call off his visit amid the public outcry. The angry crowds sought to remind Maliki of what happened during his term, where one-third of the country was lost to IS and about 1,700 young men from southern cities were killed in the Camp Speicher massacre in Salahuddin province. The protesters sarcastically called Maliki “Speicherman” in an allusion to the superhero Spiderman.

After his return to Baghdad Dec. 11, Maliki released a statement in which he expressed his exasperation about what he called “the rise in gang and outlaw militia activities” in Basra; this came in response to the slogans against him and the angry crowd that stopped him from speaking to his supporters in Basra.

Although Maliki’s statement only spoke of “militia activity,” the Islamic Dawa Party’s statement went further, saying that what its secretary-general and his companions went through was “a flagrant attack,” labeling the protesters as “outlaw delinquents.” However, the most notable escalation came when the Shiite party — which has had three of its members hold the prime minister’s post since 2003 — called on “all its members to show restraint and resort to the law,” while warning, “If legal authorities fail to take deterrent actions and protect citizens from the evils of these criminal gangs, then it had better prepare for a second Charge of the Knights.” Operation Charge of the Knights was carried out against the Mahdi Army, the Sadrist militia, in Basra province in 2008.

In light of these events, concerns resurfaced about a possible Shiite confrontation involving, on the one hand, the Dawa Party and Maliki’s supporters, and on the other, the Sadr-led militia, Maliki’s staunchest opponent. This led lawmaker Hanan al-Fatlawi, who is close to Maliki, to speak to the Financial Times about a possible Shiite-Shiite conflict in post-IS Iraq.

However, a military clash seems unlikely, especially after the Sadrist movement refrained from responding to the allegations that it was staging anti-Maliki demonstrations. Writer Safaa Khalaf, originally from Basra province, told Al-Monitor that the Sadrist movement may have mobilized a number of supporters in Dhi Qar and Maysan provinces against Maliki, leading him to “visit Basra to regain his dignity after coming under public fire in Amarah and Nasiriyah, the capitals of the two southern provinces.” Khalaf said, “It is a completely political confrontation that will not necessarily lead to a bloody one.”

Khalaf, who is preparing to publish a book about the political changes and the rise of militias in Basra since 2003, said, “Maliki was attempting a political maneuver in three provinces in the hope of restoring his pride.” Khalaf added, “It could be that Maliki now realizes that he is out of the equation.”

Khalaf said of Basra residents’ indignation against Maliki, “Basrawis had to deal with the failures of two former governors appointed by Maliki, not to mention pervasive corruption, sale of posts, monopoly of large services and investment contracts. This has led to the deterioration of service quality.”

Maliki, who was denied the third term he sought in 2014, spoke of the importance of political majority rule in Iraq only days after the events in the south. Earlier, Maliki did not deny his intention to return to power as prime minister.

If those who took part in the anti-Maliki demonstrations in the south were indeed Sadrist opponents wishing to crush Maliki’s political hopes, then it must be said that the mistakes he committed when he was prime minister have taken their toll. Anger about this has been shown to a great extent in the slogans shouted during the demonstrations that started in July 2015 in most of the central and southern Iraqi cities.