Gaza youths use cellphones to make films about unemployment, disabilities

Palestinians in the Gaza Strip are submitting short videos filmed on their cellphones to the Mobile Short Film Festival, which has organized the first such contest in Gaza. 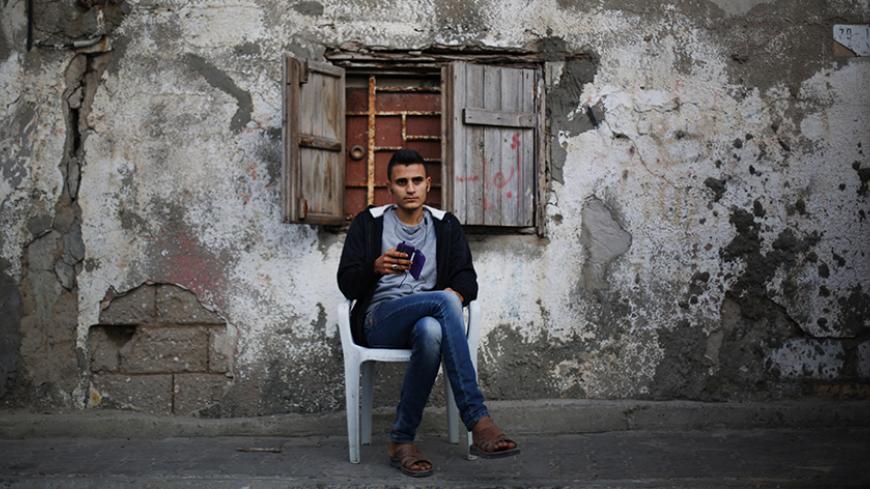 KHAN YUNIS, Gaza Strip — The Gaza-based Culture and Free Thought Association (CFTA) is organizing the Mobile Short Film Festival, a first for the Gaza Strip. Participants must be Palestinians between the ages of 18 and 35 residing in Gaza, and their video footage must focus on issues related to youth unemployment and the rights of people with a disability. The competition guidelines state that participants can submit their videos, which should be two to three minutes long, between Dec. 19 of last year and Jan. 19. The videos with the most public votes will be screened during the festival’s award ceremony, whose date has yet to be announced.

Karim Tartouri, 22, is getting ready to produce his short film about the rights of people with disabilities in Gaza. He will shoot and carry out the video editing using his cellphone.

Tartouri, who graduated from Palestine Technical College with a certificate in Television Arts, told Al-Monitor that producing a short film using a cellphone is a genius idea, since anyone with a modern mobile device can do this and join the festival's competition. He said that this competition gives him the opportunity to show his passion for video production and apply what he learned in college about filmmaking. In his short film, Tartouri will focus on the loss of job opportunities by people with special needs because of their disability.

Ibrahim al-Batta, 26, recorded a short film about the complex social issues of nepotism, unemployment and brain drain. He aspires to win Gaza’s Mobile Short Film Festival in the category of youth affairs, to make up for his lost chance to participate in the "Qomrah" TV show due to internet problems that prevented him from uploading his film and sending it to the jury on time, although he had passed stages one and two of the competition.

On Dec. 13, Batta’s short film on nepotism won the Integrity Award at the annual Transparency Festival held on the occasion of International Anti-Corruption Day by the Coalition for Accountability and Integrity. He told Al-Monitor that his passion for filmmaking encourages him to participate in short film competitions, and that “the idea of ​​producing a short film on unemployment using only a cellphone camera is a new experience worth trying."

Soha Abu Diab, the media coordinator of the festival in Gaza, told Al-Monitor, “The short films must focus on a clear idea and the filmmaker must show extensive skills and innovation; the ability to shoot a film of high quality and high resolution is not a prerequisite. The most important conditions of the competition are to film with a cellphone camera and to carry out the video editing with a phone application or a laptop.”

She said, “Participants must produce a short film not exceeding three minutes about one of these two topics: unemployment or the rights of people with a disability. After filling out the application form on Atabat website [which is affiliated with the CFTA] and uploading the short film, the footage will then be assessed by the festival’s jury. The public can then vote via the website, and the film with the highest number of votes will win. The date of the award ceremony will be announced later on.”

Abu Diab said that any video shot with a digital or ordinary camera will be disqualified, and that the short films can be edited on the participant’s cellphone or laptop using an application for video editing. She asserted that the jury will select the qualified films to be part of the competition as per the guidelines listed on the Atabat website.

The head of CFTA’s Youth Cultural Center, Hossam Shahada, told Al-Monitor that film directors, experts on the issues of youth unemployment and people with disabilities in addition to CFTA representatives will be part of the jury who will select the films that the public can vote on.

For her part, Abu Diab said that the names of the winners will be announced during a ceremony organized by the CFTA, and that the venue of the ceremony has yet to be determined.

Shahada said that cellphones allow their users to document their everyday lives through the cameras they carry around with them. He said, “Video footage captured with cellphone cameras have played an important role in many social and popular events around the globe and the Arab world, such as in Syria, Tunisia and Libya. Cellphone cameras allow everyone to participate in documenting what they encounter and they have become an important and inexpensive tool for social change.”

He noted that the festival did not cost much to organize and at the same time it allows everyone a chance at political, cultural and societal documenting. “The CFTA decided to organize this festival as it believes in the importance of cellphone cameras as a tool in documenting social issues, allowing regular citizens to participate efficiently and to positively change their communities,” he said.

Shahada explained that the competition aims at encouraging young people to participate in bringing about change through visual art, shedding light on unemployment issues and the rights of people with disabilities in the Gaza Strip, and to express their views openly.

The competition of the Mobile Short Film Festival allows young Palestinians to express themselves and chase their dreams with a simple and widely available tool that does not require spending a large amount of money to produce a short film for public viewing.