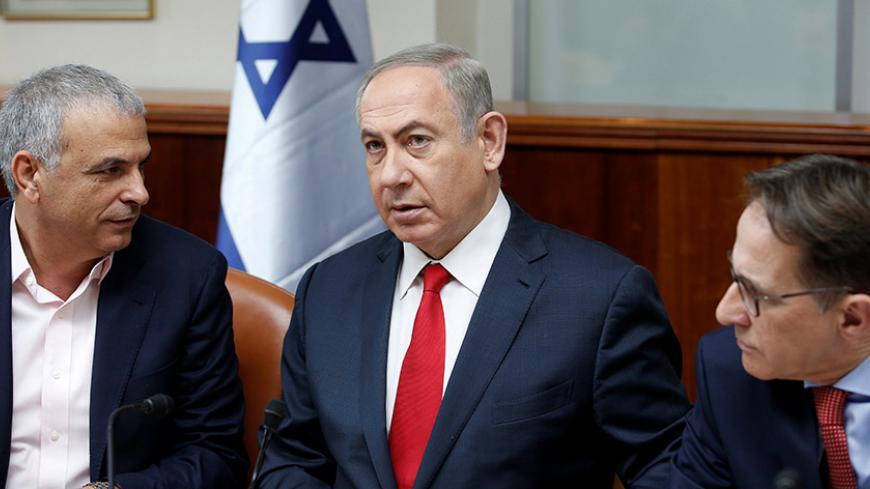 Prime Minister Benjamin Netanyahu has often stated that he would try to convince the new American administration to reopen the nuclear agreement that was signed between Iran and the six world powers in July 2015. He even told CBS last December that he has at least “five ideas” on how to facilitate the reopening of the agreement. Evidently he will share his ideas in February with US President Donald Trump in a meeting that will take place between them in Washington.

The problem with Netanyahu is that he, like Trump, currently does not have the backing of the security and intelligence networks of their respective countries. Perhaps even the opposite is true. Those in Israel’s various security branches are worriedly keeping track of developments. The recommendation of all the security branches, from the Israel Defense Forces (IDF) to the Mossad and Military Intelligence, is unequivocal: not to beg the Americans to reopen the nuclear agreement. Period. True, the IDF and Mossad were not enthusiastic about the deal itself, which has innate shortcomings and problems. Israel is convinced that a different approach in the negotiations could have brought about better results. But since the nuclear deal was signed, those in Israel’s security system feel that reopening the agreement would cause more damage than it would benefit Israel. That is because such a step would necessarily cause a dramatic confrontation between the United States and Iran.

According to Israeli intelligence (and all the other intelligence organizations in the West), Iran is, at this point in time, adhering closely to the agreement. A reopening of the agreement would cause an immediate loss of the deal’s main achievements, which are deferring Iranian nuclear danger by 10-15 years and lengthening the estimated Iranian “breakout time” (toward nuclear bomb capabilities) from only three months in the past to an estimated year and a half in the present (at least). The Israeli security system views the agreement as a positive development, despite the fact that it is full of holes and incomplete. The IDF’s multiyear strategic plan is based on this deal. “We have a 10-year strategic opportunity to build up our strength, change our approach and carry out strategic processes,” said a highly placed Israeli military source speaking on the condition of anonymity to Al-Monitor. “That is the gift that the nuclear agreement gave Israel, and that is an irrevocable opportunity we must not squander.”

Iran, according to a highly placed Israeli military expert, is an enemy of an entirely different order of magnitude compared to all the other traditional enemies Israel coped with, till now. Iran is a regional power, with substantively greater abilities than the countries bordering Israel. Israeli intelligence is keeping a close eye on the domestic situation in Iran. After decades of Israeli hopes for the fall of the ayatollah regime, Israel is lowering its expectations and hopes. “The Iranian government is stable,” a member of the Israeli security system told Al-Monitor on the condition of anonymity. And he knows what he is talking about.

It turns out that the IDF' Military Intelligence wing conducts opinion polls in Iran. Modern media methods allow everyone to conduct polls anywhere, whether by social networks, telephone or special programming and algorithms that are capable of measuring and assessing the stability of a regime via what appears on the internet. Israeli experts believe that despite some inner agitation in Iran and despite the fact that there are more Iranians interested in freedom and Western brand names and values, still, President Hassan Rouhani’s regime is stable. The Iranian nation still views Rouhani as their authentic representative, and the inner agitation doesn’t threaten the regime. The Israeli assessment is the following: that revoking the nuclear agreement would only unite the Iranian people more than ever behind the regime (against the West), and perhaps would even push Iran to go for a nuclear breakout — the one that was averted at the last minute by the signing of the Vienna agreement.

These early days of Trump in the Oval Office are being powerfully reflected in the Israeli political system. We now see that the distance between dreams and declarations, and the complex reality in the region, is enormous. After already celebrating the transfer of the American Embassy from Tel Aviv to Jerusalem as a given, Israeli right-wingers received the news on Jan. 22 that the US is “at the very beginning stages of even discussing this subject.”

Netanyahu and Trump held their first phone call, after Trump officially assumed his role as president, on the night between Sunday and Monday (Israel time). Trump described the conversation as “very nice.” Netanyahu, by contrast, urgently hurried to convene the Security Cabinet in order to try to dissuade Minister Naftali Bennett of HaBayit HaYehudi from bringing up his proposal of annexing the settlement town of Maale Adumim to Israel’s sovereignty, as the first step toward annexing the lion’s share of West Bank Area C, under Israeli control. Netanyahu warned Bennett and the right-wing ministers in the Likud that such a course of action would likely sabotage relations with the new administration. Netanyahu explained that the new administration had implored him not to carry out any deal-changing actions on the ground without prior coordination.

But some right-wing activists presented conflicting information, including those who were present at Trump’s swearing-in ceremony. These activists claim that sources close to Trump encouraged them to take as many actions on the ground as possible, in order to create facts on the ground without asking unnecessary questions.

This situation of conflicting messages received simultaneously in Jerusalem from Washington symbolizes the current reality more than anything else: No one really knows what Trump wants from Israel. On the one hand, it is true that he is surrounded by supporters of Israel with right-wing views. On the other hand, Netanyahu is trying to lower his profile, avoid doing anything rash and emphasize the Iranian issue much more than the Palestinian one. Meanwhile, Defense Minister Avigdor Liberman rejects all ideas of annexation outright.

To this, we add the following: advanced stages of a criminal investigation against Netanyahu and an emerging police recommendation to file an indictment against the prime minister. Thus, Israel’s political system is spinning and off balance. Preparing for the possibility of Netanyahu being forced to resign following an indictment, various right-wing leaders are trying to outdo one another in order to be first in line for right-wing votes at the polling booth. That is the reason that Netanyahu forced Bennett to stop him from presenting a bill for annexing Maale Adumim. That will be the differentiation between Bennett and Netanyahu, or Netanyahu’s political heirs, on the day of judgment at the ballot box. And in Israel, that day looms closer than ever.