Pantomime duo raises awareness about crucial issues in the country through street art. 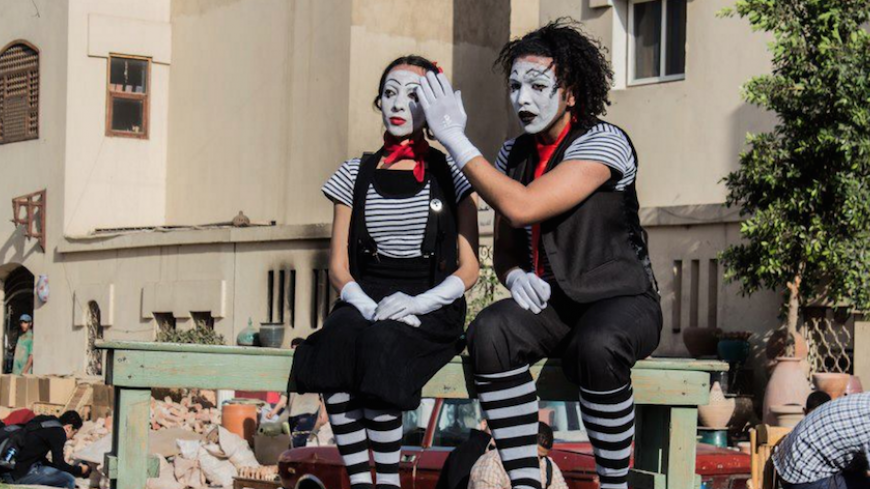 On one of Cairo’s deafening streets, young female mime artist Nour Nasr quietly dazzles passers-by with her breathtaking performance that draws smiles on people’s faces and raises awareness about social and cultural issues.

Defying stares, harassment and a police crackdown, Nasr said that she does not mind it. “We love what we do, and we have a message. We seek to revive pantomime as a street art as well as make people happy,” she told Al-Monitor.

Nasr is part of a pantomime team called “Esmo … Eh?” (What is it called?), which performs improvised sketches in public spaces, participates in mime festivals at various non-governmental theaters and trains others to spread what they passionately believe in.

A veiled woman, Nasr said that she also faces another struggle as she breaks social stereotypes by roaming Cairo’s streets and even public transportation systems to make pantomime performances. In Egypt, veiled women often face social pressure when they join a certain art. For Nasr, it seems to be even harder because she takes to the streets and comes in direct contact with people from different backgrounds.

“People usually call us clowns, but we are used to that and it does not bother us anymore,” said Nasr.

The young artist added that she along with her other fellow veiled women are working to smash social taboos that prevent veiled women from joining any kind of art in Egypt.

“Art is not restricted to a certain gender or people with a specific style. Art is for all people. Veiled women do have skills and they are capable of practicing them in any art,” Nasr added.

Pantomime has recently been growing in Egypt with artists performing in streets and within the underground arts scene with the aim of bringing the art back to life in addition to raising social awareness.

Safaa el-Mohamady, the co-founder of the “Esmo … Eh?” pantomime team, said that they make use of the art to tackle some social issues in Egypt. “People tend to forget words, but they never forget actions. Remembering someone from the way they act is more powerful and effective. That is why pantomime is the most believable type of art,” el-Mohamady told Al-Monitor.

She added that the best thing about pantomime is that it speaks a universal language that can be addressed to different audiences, regardless of their cultures.

El-Mohamady also said she had noticed that many girls, especially those who are veiled, want to practice pantomime, and so the team organized workshops for women irrespective of their style to teach them about the art.

“If you love acting, movement, craziness and if you are veiled or not, you can enjoy a distinguished experience with the art of pantomime,” El-Mohamady wrote on the team’s Facebook page, calling upon women to join a workshop she organized along with the team’s co-founder Ahmed el-Borei. Some of the trained women have already joined their team and are now taking part in their performances.

El-Mohamady and el-Borei met through their common passion of pantomime acting about six years ago. They got married and founded the group “Esmo … Eh?” in 2010. After their marriage, they turned their house into a workshop for mimes.

Since 2011, the couple has been organizing the “100 Thousand Mimes for Change” festival, which gathers dozens of mime artists to perform for art lovers. Last year, el-Mohamady and el-Borei decided to hold the fifth round of the festival despite the tense security situation and the lack of resources.

“Performing pantomime in Egypt is not easy. It is very challenging. However, we are enjoying this and are trying as much as we can to make people know about it,” el-Borei said.

Performing pantomime on the streets is hard in Egypt, as artists need a permit from the police, which usually takes a lot of time and can sometimes be rejected.

However, el-Borei said that pantomime is worth the risk because through the art actors can deliver messages and raise awareness about crucial issues in the country. “In pantomime performances, people highly concentrate because they want to know what is happening. And this is a very good chance to convey messages,” he added.

El-Borei also believes that the art of pantomime in itself is very difficult. “It seems easy when you act as if you are laughing or drinking. But when you make a plot, a theater play, you need to be an author, a director and an actor. These things are not easy. You need to have this mix to be able to deliver a mime performance,” he said.

In pantomime, only actors grace the stage and there can be music and minimal lighting, but no scenography or props. Pantomimes are dressed in black and white and their faces are painted black and white.

Some historians say that pantomime dates back to ancient Greece. However, others argue that it is an art derived from the ancient Pharaohs. It was developed in England and is still performed throughout the United Kingdom, particularly during the Christmas and New Year season. Charlie Chaplin is one of the most well-known mime artists to date who shot to fame through theater and film during the silent area.

While its mainstream popularity is not very wide, pantomime is still a relevant discipline in Egypt. El Sawy Culture Wheel, for example, hosts an annual mime festival.

Despite the challenges, el-Mohamady and el-Borei said they would continue to perform pantomime for life with a dream that they say can be fulfilled. “We want to see children one day playing pantomime in the streets just like we see them playing football,” el-Mohamady said. “The art has a great ability of helping people overcome their daily grievances,” she added.