As risk rises, will Turkey persist in quest for al-Bab?

The Turkish army, which so far has avoided actively fighting in Syria, now faces increasing danger as it advances to al-Bab. 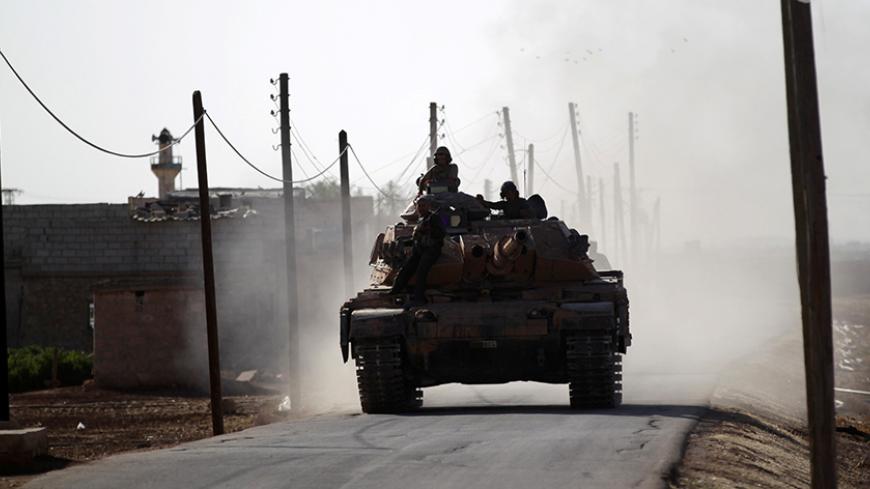 The Turkish army's greatest fear in Syria has come to pass. On Nov. 29, Islamic State (IS) militants who were attacking a Turkish special forces detachment near al-Dana village, about 3 kilometers (less than 2 miles) northwest of al-Bab, abducted two Turkish noncommissioned officers (NCOs) and their Turkmen translator. IS-affiliated news sites were the first to report the incident.

That evening, the official website of the Turkish General Staff acknowledged search operations were underway. By that time, special forces NCOs Muhammed Duran Keskin, Kivanc Kasikci and their translator had already been moved to the IS bastion of Raqqa.

Keskin and Kasikci are not the first Turkish soldiers that IS has abducted. On Jan. 1, 2015, NCO Ozgur Ors from a battalion on the border town of Kilis was taken hostage by IS when, officials said, he inadvertently crossed into Syria while tracking smugglers. Held hostage in Jarablus for about a week, Ors was rescued in a National Intelligence Organization operation and returned to Turkey. Strangely, Ors — who was welcomed back as a hero — was discharged from the Turkish Armed Forces (TSK) the following month for allegedly not resisting capture and providing propaganda material to IS, thus damaging the TSK's reputation.

Pvt. Serter Tas, who was also captured in Kilis, has been held captive by IS for more than a year. Contacts with IS seeking to secure his release have not yielded any results. Tas, whose photograph and messages were published in the April issue of the IS online magazine Konstantiniyye, has been waiting to be rescued for 15 months.

When it became known that the two soldiers abducted Nov. 29 were ranking special forces NCOs who were in Syria as part of Operation Euphrates Shield, Turkish and foreign media showed more interest in the incident. Now everyone in Turkey is worried about the fate of these men in the hands of IS, whose inhumane treatment of its prisoners is well-known. People remember the photos of the Jordanian pilot burned alive in an iron cage and Syrian soldiers crushed under IS tanks.

What will IS, which is under growing pressure in Iraq and Syria, do with the Turkish NCOs? Despite all its problems, IS still appears to operate with a rational mindset. It knows well that brutal treatment and execution of Turkish captives will incense the Turkish public.

But can IS be so simple-minded as to execute them? Normally, IS seeks the release of its militants in an exchange for the captives it holds. In September 2014, for example, IS released dozens of hostages it had taken from the Turkish Consulate in Mosul in exchange for some IS militants in Turkey. It is therefore highly probable that IS will use the captured Turkish NCOs either for an exchange deal with Ankara or for some concessions in the field.

At present, there is a reinforced tank battalion of about 600 Turkish army personnel who avoid combat and mostly provide fire support and logistics to Free Syrian Army (FSA) units. There are also about 150 TSK special forces personnel who coordinate close air support for the FSA, arrange medical evacuations and perform forward observance for Turkish artillery fire. In addition to this 750-strong TSK presence in northern Syria, there are armored, mechanized infantry and commando brigades on standby on the Turkish side of the border.

It is clear that as Turkish soldiers approach al-Bab, they will face increased risks of getting hurt or being captured. Will Ankara persist in the much-trumpeted capture of al-Bab or turn toward Manbij in the northeast?