The budget of the Palestinian security forces is being questioned, and attempts are being made by the United States to cut it back. 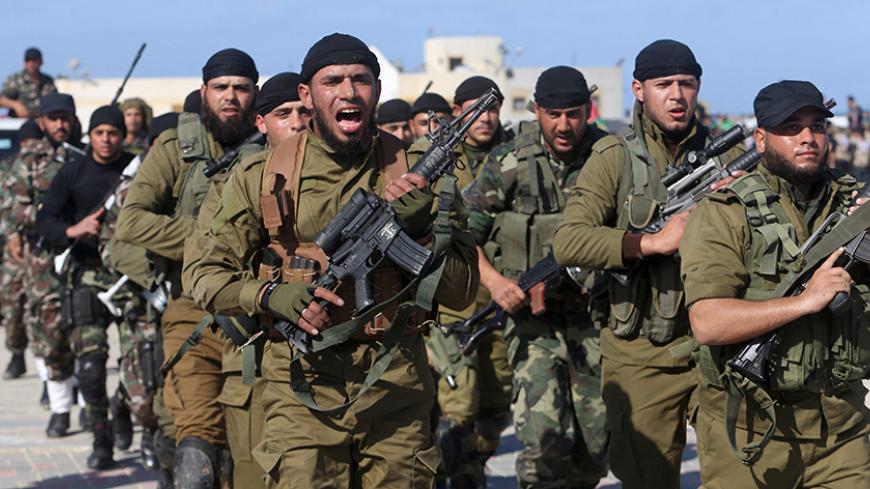 Serious questions are being asked about the huge Palestinian security budget. Local transparency organizations, the US State Department and Congress are not convinced that the Palestinian government needs to spend so much of its budget on security.

On Nov. 9, the Ramallah-based Coalition for Accountability and Integrity (AMAN) issued a detailed report of the Palestinian security sector, saying it amounts to more than one-third of the Palestinian government’s overall budget.

On the same day, Hama Zeidan, a researcher at AMAN, revealed details of the security budget during a conference held in Ramallah. “The security sector received $1.078 billion out of the overall $3.86 billion Palestinian budget,” Zeidan said, adding that this budget is larger than the Palestinian health and education budgets combined.

During the same conference, AMAN Chairman Abdel Qader al-Husseini called on the Palestinian government to adopt a plan of austerity when it comes to spending policies, calling for a partnership with civil society when making decisions regarding how taxpayers' money is spent.

In Washington, the issue of the Palestinian security budget was criticized in a different way. The US contribution to Palestinian security was cut in half in the congressional budget proposal for the 2017 fiscal year presented by the US State Department to the US Congress in the fall of 2016.

Seth Binder, a program manager with Security Assistance Monitor, which documents all publicly accessible information on US security and defense assistance programs throughout the world, told Al-Monitor that funding for Palestinian security has been decreasing. A graph created by the center — which receives no government funding and is funded by private foundations — shows that the United States supported Palestinian security with $184 million in 2009, but settled on $70 million since 2013; while the US State Department’s recommendations to Congress for 2017 called for a cut in half, to $35 million. Most of the money saved was shifted to the Palestinian economic development budget, thus not affecting the overall US funding to Palestine.

Binder noted that US funding for Palestinian security is already generally restricted, saying, “It is mostly used for equipment, training and basic infrastructure work.” Much of the US-funded training for the Palestinian security takes place in Jordan. Binder added that no lethal equipment is delivered with these funds.

A source, who asked not to be identified, told Al-Monitor that Israel approves all equipment delivered to the Palestinian security, and that at times, even after these approvals, it takes a long time to overcome the delays at the border crossings.

Maen Areikat, the PLO representative in Washington, told Al-Monitor that the reason given for the cut in the security fund was the fact that the infrastructure and equipment purchases for the Palestinian security forces had been made in previous years. Areikat told Al-Monitor that the PLO delegation was able to convince the appropriations committee to shift the reduced $35 million to the economic fund.

Husam Zomlot, an adviser to Palestinian President Mahmoud Abbas, spoke to Al-Monitor about the importance of bilateral relationships between Palestine and the United States. Zomlot, who participated in a high-level visit to the United States, told Al-Monitor that the proposed State Department cut in the Palestinian budget’s security sector was not discussed in the meetings with the various US officials. The Palestinian delegation, headed by PLO Secretary-General Saeb Erekat, had met with US Secretary of State John Kerry and top US officials Dec. 14.

One of the reasons why the issue was not discussed might be the expectation that the budget sent by the Barack Obama administration would not be voted on by the current Congress, as Washington is awaiting the arrival of the Donald Trump administration, and therefore, the current Congress tends to approve short-term continuing resolutions rather than tackle the full proposed aid budget.

At that time, Congress will have to either pass a new spending bill, which could affect the Palestinian funding levels, or pass another continuing resolution to keep levels the same as in 2016. The fiscal year runs from Oct. 1 to Sept. 30.

Binder said that he double-checked the fiscal year 2016 legislation and it does not specifically list or exclude Palestine. “Therefore, our best indicator is that $70 million will continue until the end of April 2017,” he said.

In comparison with the overall security budget, the US input is rather small. But the decision of the Obama administration to cut this funding in half does send an important message to all governments, donors and to the Palestinian security that internal cuts are needed for the future.

Public demands by Palestinians and the international community for a shifting of the budget from security to social areas will no doubt continue in the years to come. The sooner the Palestinian government makes the internal adjustments, the better.