A social media campaign that is spreading fast among Facebook's Palestinian users encourages participants to donate money to people in need. 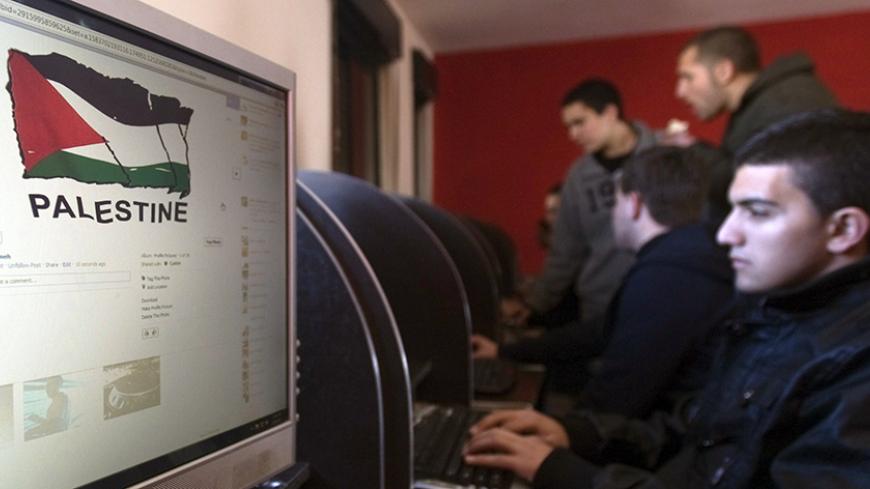 Palestinians check their Facebook accounts at an internet cafe in the West Bank city of Ramallah, Jan. 6, 2012. - AHMAD GHARABLI/AFP/Getty Images

It remains unknown who started the campaign launched under the Arabic hashtag #Haram-al Khair (Pyramid of Charity), which has taken the social media networks by storm in Palestine. But social media users are participating in the charity campaign nonetheless.

As part of this campaign, people challenge five Facebook friends to share a post saying that they will donate a sum of money depending on the "likes," comments and the number of shares the post gets. Every “like” and share of the post counts for 1 Israeli shekel (about $0.26), while a comment is worth 2 shekels. After 24 hours, the person who created the post will donate the total amount "raised" to a charity organization or a needy family of their choice. He or she will then challenge five friends on Facebook.

The campaign has gone viral, and some banks and companies are taking part in it, including Palestinian cellular company Jawwal and the Arab Islamic Bank.

The challenge was launched on social media in Morocco, right before the Eid al-Adha holiday in September, when artists challenged each other through posts and videos to donate money to a poor family. The campaign has now reached Palestine ahead of the new year and at the onset of winter, when poor families are in most need.

Social media campaigns such as this one are not subject to any supervision by the authorities or charitable organizations, and anyone who accepts the challenge pays the amount "raised" out of his own pocket.

Walaa Jarar, 29, from the West Bank city of Jenin, told Al-Monitor, “I saw the campaign on Facebook and I liked the idea a lot. I asked one of my Facebook friends to challenge me and I shared the post on Dec. 9.”

Jarar said the goal behind this campaign is to use Facebook in a useful way for charity, noting that she was able to set aside from her own salary the amount corresponding to the number of interactions her Facebook post received.

Mohammed Hasna was also challenged by a friend. His Dec. 5 post received 1,100 "likes," got 62 shares and about 384 comments. “I paid the rent of four families in need and offered in-kind contributions to poor families,” he told Al-Monitor.

Hasna said the campaign has achieved great success, but he noted, “The crisis in the Gaza Strip will not be solved by a [social media] campaign. Salaries are being cut and the unemployment and poverty rates are skyrocketing. To resolve this crisis we must end the blockade and the internal division.”

Fadi el-Hindi, a civil society activist, was among the first in Palestine to join the challenge Dec. 3. He told Al-Monitor, “I liked the idea as it encourages to do good. I learned about it from a comment someone made on the post of my friend who challenged me.”

He said that the average amount collected by participants in the campaign is 400-500 shekels ($103-$129). He added, “It depends on the participant’s number of friends and people who reacted to his or her post.”

Hindi noted, “The campaign is only positive. It was used as a model to launch another challenge for volunteering, such as providing training and transferring knowledge and experience, but that has not been as successful as this campaign.”

Some people opposed the challenge on social media. Social activist Mohamed Sheikh Yusuf, 28, criticized the campaign and wrote on Facebook Dec. 5, “This challenge is only designed to play on people’s emotions.”

He told Al-Monitor, “Some perceived the campaign as encouraging, but for what? The only person making the donation is the person who writes the post, while the others are virtual donors who only contribute [with "likes" and shared posts] to the increase of the amount without actually making a donation.”

Joman Mazzawi, 32, from the city of Nazareth, told Al-Monitor, “I joined the campaign in late November after one of my Facebook friends challenged me. I challenged five other friends from different geographical regions, such as Gaza, the West Bank and the 1948 territories.”

She stressed that she took the campaign seriously and donated the amount to an initiative launched in Ramallah. She said it was a beautiful experiment for her.

Commenting on the criticism of some, she said that she is against virtual campaigns, as they are not usually linked to real issues. However, this campaign combines what is real and virtual, as it uses the virtual world to collect money to contribute to changing reality.

She said that there are several problems regarding the campaign, as some of those who were challenged may be embarrassed, since they may be "unable to take on the challenge given their financial situation and family responsibilities.”

The participation of Palestinian companies in the charity campaign was strongly welcomed by Facebook users in Palestine, whose number exceeded 1.7 million users according to statistics published in June 2015. The "likes," shares and comments made on these companies’ posts were higher than those received by the posts of ordinary citizens.