Prime Minister Benjamin Netanyahu has once again proclaimed his support for a two-state solution with the Palestinians, but is he being genuine? 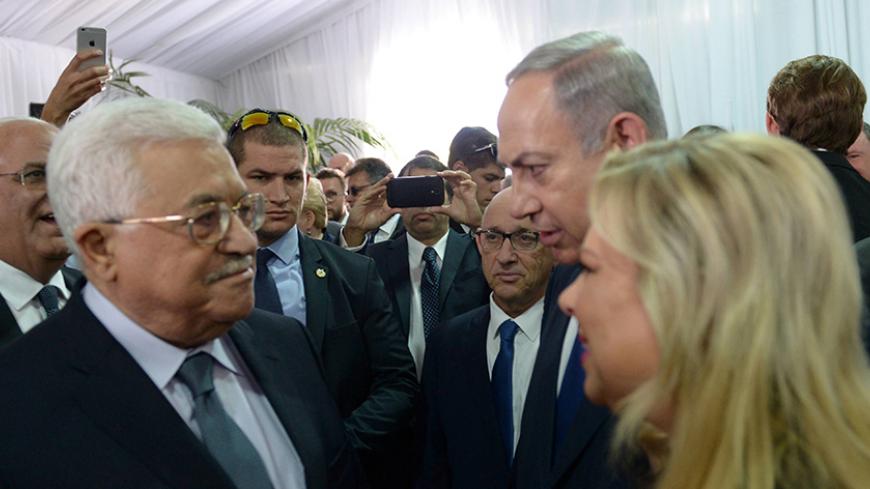 In an interview Dec. 11 on the CBS news magazine “60 Minutes,” Prime Minister Benjamin Netanyahu stressed that he would push “two states for two peoples. And that’s where I’m focused.” Selections from the long interview were quoted extensively by the Israeli media, particularly the headline-grabbing sound bite that Israel’s prime minister was committed to a two-state solution.

Given the tone of the remarks, it was obvious that Netanyahu wanted to convey the message that he was sincere in his willingness to reach a diplomatic compromise with the Palestinians. When asked what practical steps he was taking to resolve the conflict, apart from vague statements about a two-state solution, he answered that he was prepared to enter into negotiations with the Palestinians at any time and that he wants President-elect Donald Trump to help him with that. “I’d like to see if the Arab states can help me achieve that,” he added. “It’s a new reality. A new possibility.”

According to Netanyahu, the settlements are not an obstacle to peace. He said that the real reason peace has not been achieved is the “persistent refusal of the Palestinians to recognize a Jewish state in any border.”

Netanyahu may have sounded convincing and prepared, but there was nothing new about what he said. He has been repeating the same message whenever it is expected of him since his 2009 Bar-Ilan speech, when he succumbed to pressure from President Barack Obama to declare his support for a two-state solution.

During most of Netanyahu’s time as prime minister, there has been a freeze in negotiations with the Palestinians. When the Arab Spring erupted, Netanyahu reached the conclusion that direct negotiations with the Palestinians, and certainly with President Mahmoud Abbas, were not right for the State of Israel, given all the rapid changes in the region. Negotiations were futile with the Islamic State on Israel’s borders and fundamentalist terrorism raising its head.

In a series of meetings with the Israeli media this summer, Netanyahu presented an updated version of his diplomatic and security worldview through a comprehensive survey of the geostrategic challenges facing the State of Israel. Everything said in these detailed, closed-door talks was the exact opposite of what Netanyahu said in his Bar-Ilan speech. His approach placed the Palestinian issue on the margins of his list of priorities, while he spoke extensively about how “in this part of the world, the weak do not survive.”

He also explained that these days, Israel must continue to arm itself, even mentioning new submarines and F-35 jets as symbols of regional military might that would allow Israel to survive in such a dangerous region. When he did mention negotiations with the Palestinians, he said that he believed Israel must work together with the pragmatic Arab states to advance a clever, realistic peace. In other words, he was primarily advocating alliances with these countries, before negotiations.

More generally, since the end of Operation Protective Edge (2014), Netanyahu has spoken frequently about the new opportunities facing Israel through relations with the pragmatic Arab states. Two years have since passed, and there are no signs on the ground that the prime minister is spearheading any new efforts in that area either.

Given this, why is Netanyahu now espousing a renewed commitment to the principle of a two-state solution, now of all times, without even being asked? Has he changed his position? Does he now want direct negotiations with the Palestinians? Does it have anything to do with the fact that a future Trump administration seems to be more supportive and tolerant of Israeli positions when it comes to the Palestinians and the settlements? Does Knesset member Bezalel Smotrich of HaBayit HaYehudi — who was quick to tweet after the interview, “Anyone who wants to create an Arab state in the Land of Israel is not part of the right” — have cause to worry?

“There is no reason to worry that Netanyahu will begin negotiating with Abbas,“ a senior Likud minister identified with the ideological right told Al-Monitor on condition of anonymity. "All he said was a bunch of meaningless statements. No one here is really upset about it. So what if he spoke about a two-state solution? He’s been saying that for almost a decade already, and so far, there is no Palestinian state.”

The truth is that once Netanyahu’s remarks in the interview are analyzed, the inevitable conclusion is that he did not say anything new. All he did was issue a statement that made sense from a diplomatic perspective. Netanyahu has been much calmer and more relaxed since Trump's election. He is certainly more at ease compared to the tenseness evident from relations with Barack Obama and even with Bill Clinton during his first term as prime minister. As someone with highly honed political senses, Netanyahu realizes that he cannot be complacent in the face of Palestinian plans to advance the idea of a two-state solution with the Trump administration, as recently reported in Al-Monitor by Uri Savir and Shlomi Eldar.

Netanyahu is also aware that even if his most optimistic assessments come true, and Trump adopts pro-Israel policies, he will still face international pressure to bring an end to the occupation as Israel's prime minister. This will be especially true as the 50th anniversary of the occupation approaches, in June 2017. With this logic, Netanyahu believed it the epitomy of diplomatic stupidity when HaBayit HaYehudi Chair Naftali Bennett rejoiced after Trump's election, proclaiming, “The era of the Palestinian state is over.” That is why Netanyahu issued an order forbidding his ministers to discuss diplomatic affairs before the new US administration assumes office.

In terms of diplomatic behavior, Netanyahu is acting wisely. During his four terms as prime minister, he faced two Democratic presidents, Bill Clinton and Barack Obama, and was forced under pressure to advance the idea of a two-state solution. It happened when he had to uphold the Oslo Accord and again when he announced a freeze on construction on the West Bank.

The bottom line is that during all those years, Netanyahu was engaging in nothing more than a series of political maneuvers to gain himself some time. He is now for the first time about to face a Republican president who, at least according to his statements, seems to be the prince of Netanyahu’s dreams. Netanyahu realizes that he has nothing to lose if he shows generosity in his public statements. It will not send reverberations through his right-wing government, and he will appear to the world as a moderate pragmatist seeking peace in the spirit of the two-state solution.

After almost eight consecutive years as prime minister of Israel, all the signs and all his inaction seem to indicate that even in his “60 Minutes” interview, Netanyahu was doing nothing more than making a vapid statement. The only thing interesting about it is that someone somewhere thinks that what he said was worth a headline.