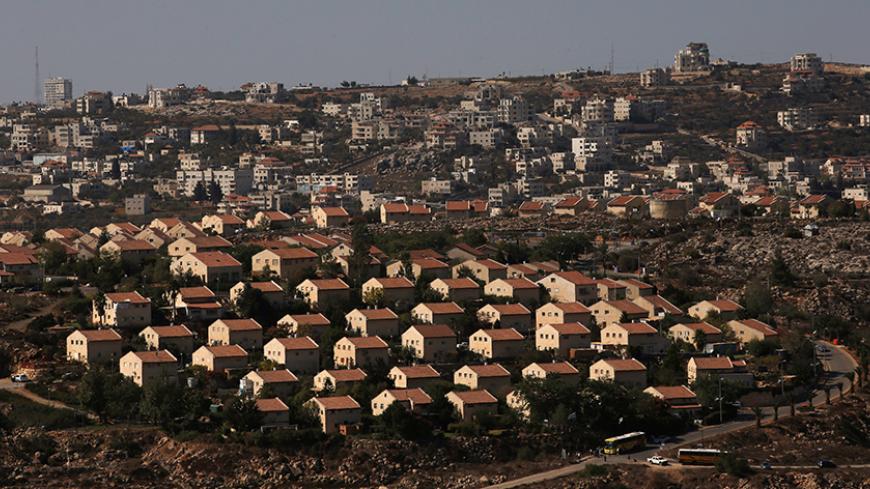 The West Bank Jewish settlement of Ofra during an event organized to show support for Amona, which was built without Israeli state authorization and which Israel's High Court ruled must be evacuated and demolished by the end of the year, as it is built on privately owned Palestinian land, Oct. 20, 2016. - REUTERS/Ronen Zvulun

Alarm bells were going off in European Union capitals when on Dec. 7 the Israeli Knesset passed, at a first hearing, the settlement regularization bill, which legalizes illegal Israeli settlements built on private Palestinian lands.

Last week, EU foreign ministers, mainly from Germany, France and the United Kingdom, as well as EU senior officials held internal consultations over the significance of this Israeli right-wing coalition move. According to an associate of Federica Mogherini, the EU’s high representative for Foreign Affairs and Security Policy, European leadership does not consider this development to be a simple tactical maneuver by Prime Minister Benjamin Netanyahu to protect the stability of his coalition. Rather, they see it as an intentional policy move instigated by Netanyahu and Education Minister Naftali Bennett — a dangerous expression of a possible de jure annexation of West Bank lands by the Israeli government. The bill may or may not pass the test of the Israeli judiciary, but Netanyahu’s decision to bring it up to a vote (imposing on all his coalition members to back it) is a clear declaration of intent targeting the half a million Israeli settlers in the territories. Netanyahu signals that as far as he is concerned, most of the West Bank will remain in Israeli hands.

The prevailing belief in EU headquarters is that the Israeli High Court decision forcing Netanyahu to evacuate the Amona outpost by Dec. 25 actually served the prime minister as an excuse to launch a more formal annexation strategy. The source explained that in effect such a policy of annexation has been taking place ever since Netanyahu’s current right-wing coalition rose to power. It is expressed in the form of Israeli economic expansion in the Israeli-controlled West Bank Area C (60% of the West Bank).

According to the official, the EU is now informally exploring among its main members what policy measures to take in case the regularization bill does come into effect.

Brussels is considering four measures, ranging from declarative condemnation to punitive moves. The first possibility on the table is an immediate stern warning (even before the High Court test of the law), delivered by the EU ambassador to Israel to the Israeli Ministry of Foreign Affairs, about the gravity of such a legal move. A second possible measure would be using international law against the Israeli legislation. EU legal experts have been asked to examine the significance in international laws of such a move and how it would be viewed by the International Court of Justice (ICJ) in The Hague. Also, the EU will consider punitive measures against Israel if this law comes into force. These may include a more rigid policy of labeling goods made in Israeli settlements and halting all EU-Israeli economic agreements for Israeli institutions active east of the Green Line. A fourth possible move would be for EU members, and especially France, to advance a UN Security Council resolution denouncing this Israeli legislation, calling for its abolishment and encouraging the ICJ to take the necessary measures against it.

Applying sanctions against Israel is the one measure the EU is excluding. This was made particularly clear in recent EU internal deliberations by German Chancellor Angela Merkel, who opposes in principle any such sanctions. At the same time, the Germans categorically object to the regularization bill and have issued an unusually sharp denunciation of the Israeli legislation. Germany’s Foreign Ministry stated Dec. 8 that it is “extremely concerned about this development and have noted with consternation statements made by Israeli government officials during this debate.” According to the statement, such a bill violates international law and undermines the Israeli commitment to finding a two-state solution.

The EU is holding extensive deliberations with the Palestinian leadership in Ramallah, expressing its support for the Palestinian position on the issue and its commitment to make every possible effort to bring about the abolishment of this bill. A senior PLO official involved in these deliberations told Al-Monitor on condition of anonymity that the Palestinian leadership is launching a worldwide campaign to bring about a repeal of this legislation and for punitive international measures against Israel: “This legislation strengthens our resolve to fight the annexation policies of the Israeli government within the context of our ‘End 50 Years of Occupation’ campaign. Many within the young Fatah leadership are now openly calling for a new intifada against Israeli settlements. We, together with our friends in the international community, will fight any effort to annex parts of our homeland.”

On the Israeli side, according to a senior Israeli Foreign Ministry official, the government is making the case in Brussels that Israel has the right to decide that its settlement activities are within Israeli law.

And so, it seems that with the regularization law, the Israeli-Palestinian conflict may be entering a new phase of more open and de jure Israeli annexation policies. A phase that obviously provokes sharp Palestinian and international reactions.